Tired of kolak and gorengan? You should try one of these.

Choosing different iftar menu from day to day could be confusing. There are hundreds of iftar menus you can get out there, on the street or in a fancy restaurant, but sometimes you want something different.

If that’s the case, why not try some prominent iftar menu from around the world? Some of them are available in Greater Jakarta area. Here they are. 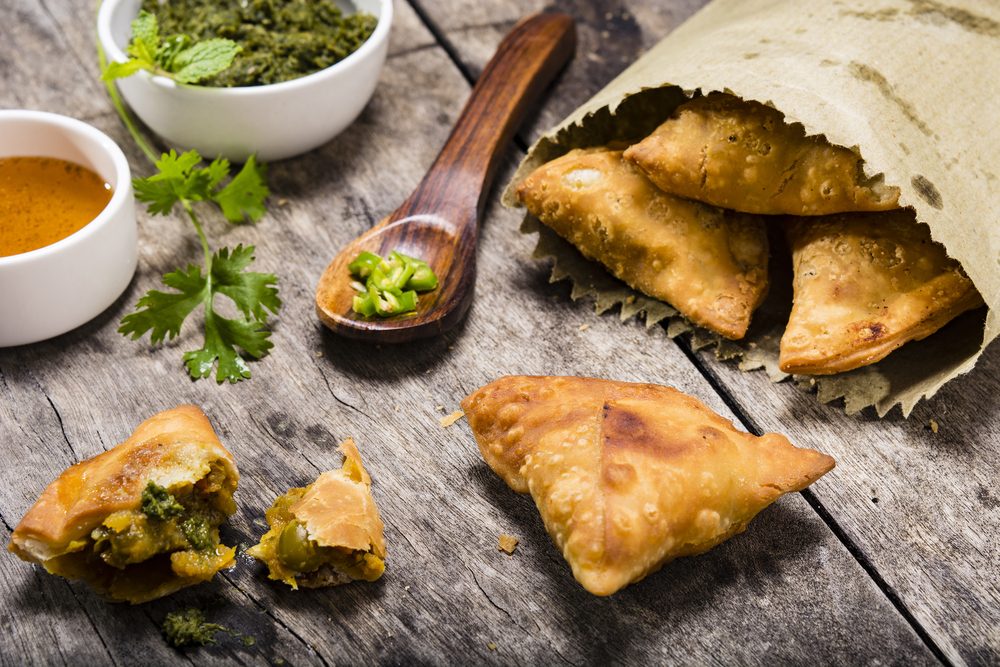 Samosa is a signature dish from South Asia, including India, Pakistan and Bangladesh. It looks like a traditional pastel, but the triangular fried pastry has a very different filling. The delicious, crispy pastry is stuffed with spiced boiled potatoes, mixed with peas, onions, cilantro and sometimes paneer.

Samosas are quite easy to find in Jakarta. Some restaurants offer original samosas, including The Royal Kitchen in Mega Kuningan Jakarta, Al Jazeerah in Menteng, Sindbad in Petamburan or the more affordable ones in Lulu Hypermarket in Cakung, East Jakarta. 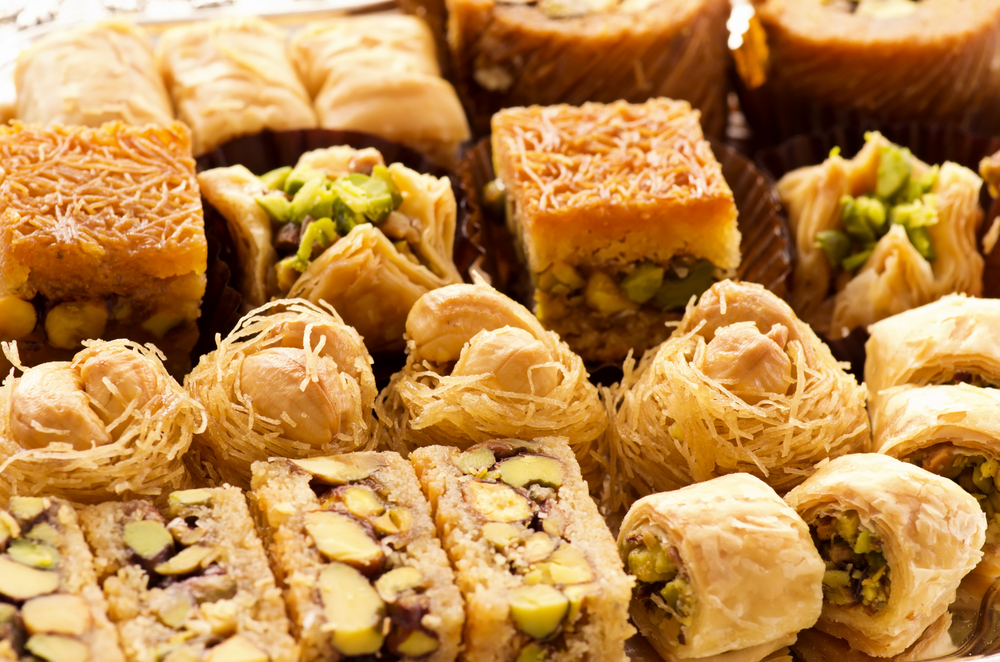 Baklava is an all-time favorite. It's a sweet pastry originated in Turkish region and former territories of the Ottoman Empire. The crispy layered pastry skins are filled with crunchy almond chops, pistachios and walnuts, and sweetened with honey and filo pastry. Once you’ve had a mouthful of it, you’ll crave for more.

Some Turkish restaurant in Jakarta such as Turkuaz Baklava House in Senopati or Warung Turki and Shisa Cafe, both in Kemang, have baklavas on their menus. 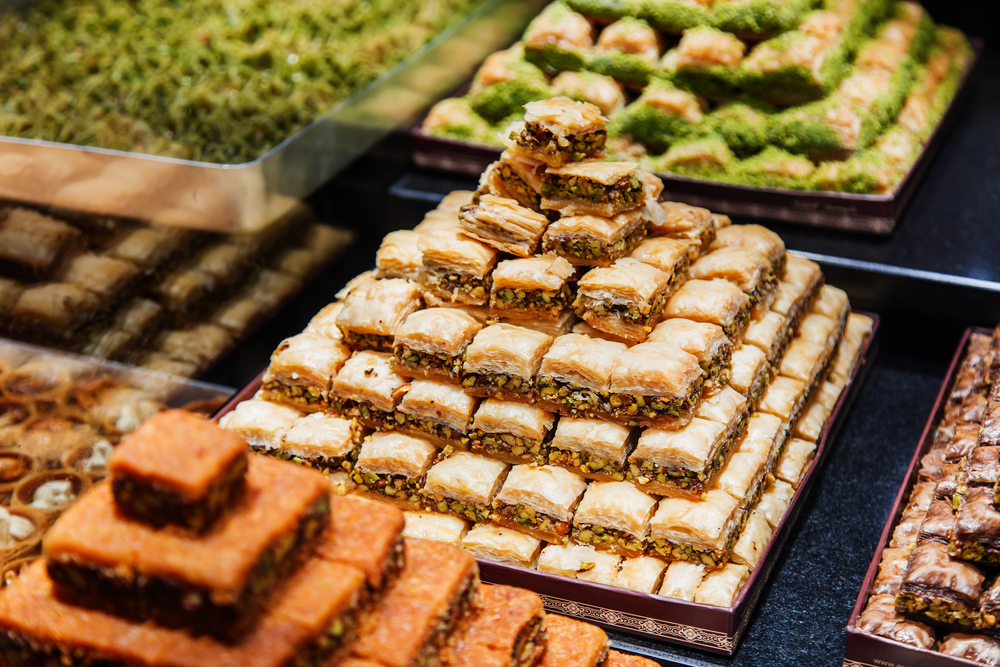 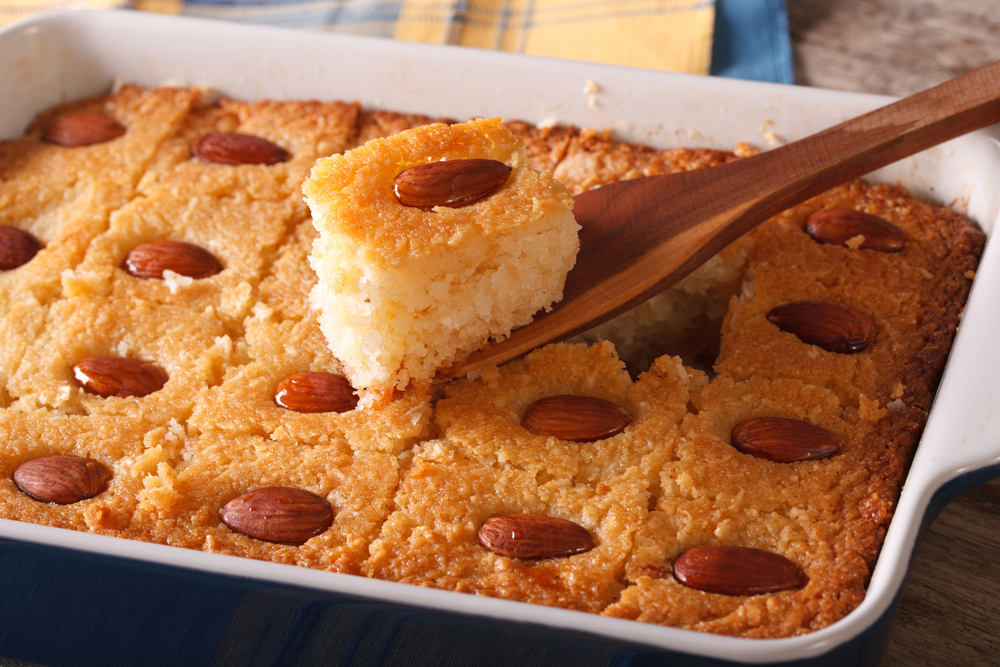 There are some delicious, finger licking Arabian sweets recommended trying, including mshabak (a Lebanese sweets popular during Ramadan), Turkish delight (traditonal Turkish confections made of starch and sweetened with honey and molasses) and biscuits or pastries such as kahk, ghorayeba, maamoul, qatayef (another Arabian Ramadan dish filled with Akkawi cheese or sometimes nuts), basbousa (an Egyptian sweet cake made of semolina, soaked in simple sweet syrup, sometimes topped with pistachio or cashew).

Some of these Arabian sweets are available in Lulu Hypermarket in Cakung, East Jakarta. Also known as Lugaw, Arroz Caldo is a Filipino-style congee, or rice porridge, topped with chicken, seasoned with onion, garlic, ginger and fish sauce, all topped with crunchy fried garlic. In addition to iftar menu, Arroz Caldo is also suitable to be eaten during suhoor because it gives a sense of warm and it's quite fulfilling. It sounds similar to Indonesian bubur ayam, but the taste is quite different.

You can try a bowl of steaming Arroz Caldo or Lugaw in Astig Filipino restaurant in Ruko Crown Golf, North Jakarta. 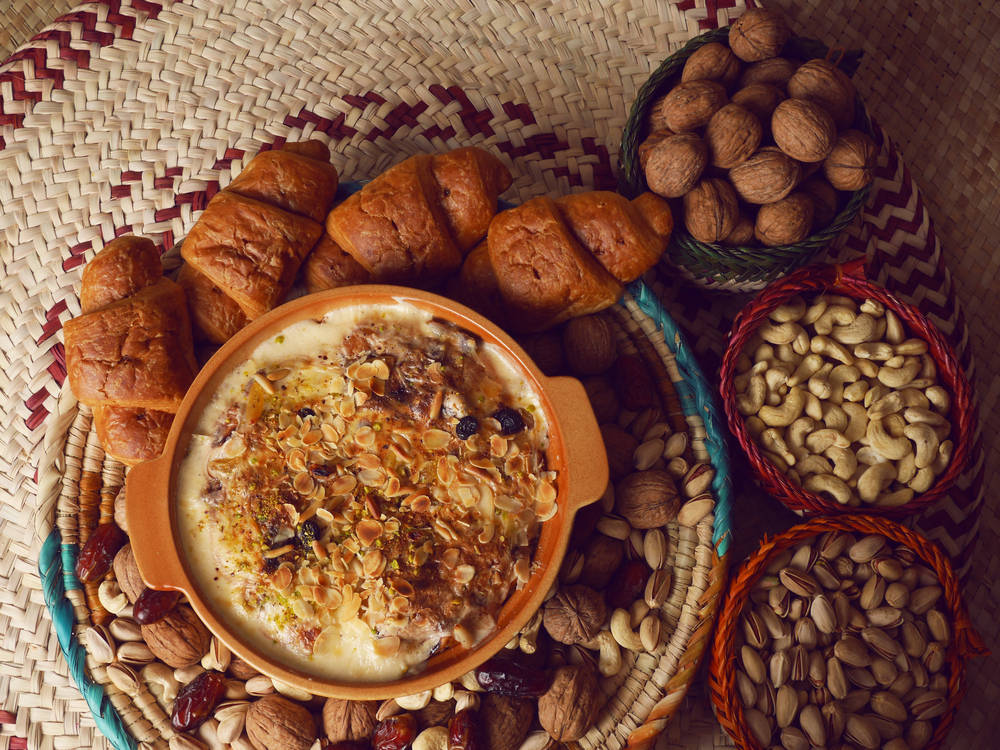 Umm Ali — means the mother of Ali — is one of the most popular dessert in Egypt. It resembles bread pudding and is made of double cream, phyllo pastry, milk, nuts, sometimes sprinkled with raisins, sugar and coconut flakes. In some regions, it also known as Egyptian Bread Pudding. Al Jazeerah Signature in Menteng has Umm Ali on its dessert menu. Pakora is a fried snack, or fritter, made from peanut flour, corn flour, rice flour, chili powder, turmeric powder and egg. It’s popular in India, Pakistan and Bangladesh. Pakora comes in vegetarian and non-vegetarian versions, which added some proteins such as chicken or prawn. At a glance, it resembles Indonesian fritter bakwan, but the taste is actually very different.

You can try a plate of crispy and satisfying pakoras in Indian restaurants such as The Royal Kitchen. 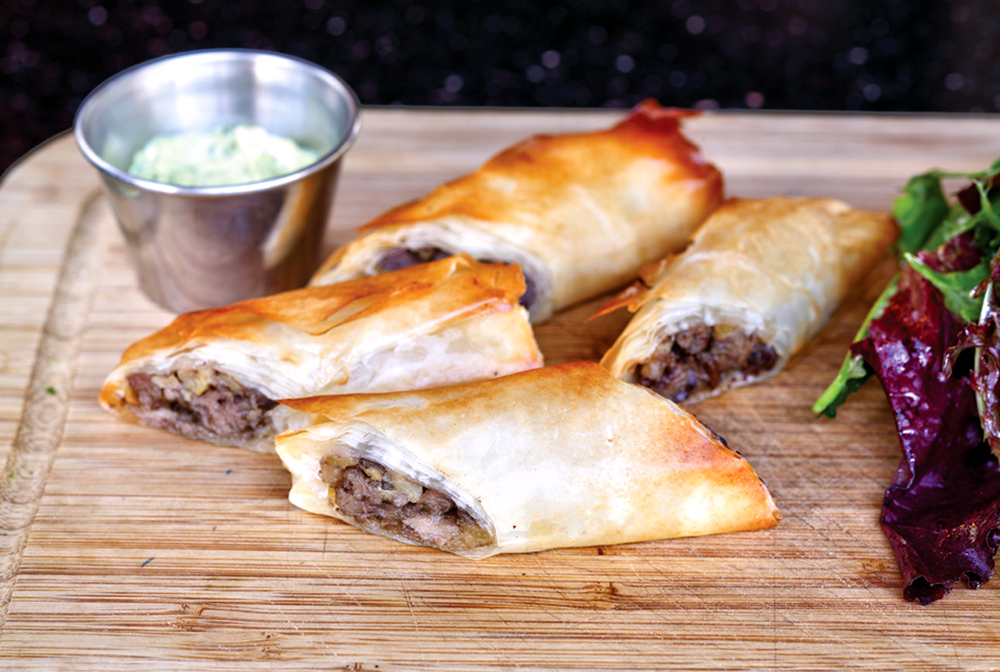 This delicious Turkish party looks like baklava, but bourek has a more varied stuff and tends to be savory. The pastry dough is made thin and stacked in layers, then filled with feta cheese, minced beef, olive oil and vegetables such as potatoes and spinach, and then baked. You can taste the tasty bourek at some Turkish restaurants in Jakarta, such as Anatolia and Shisha Cafe in Kemang. 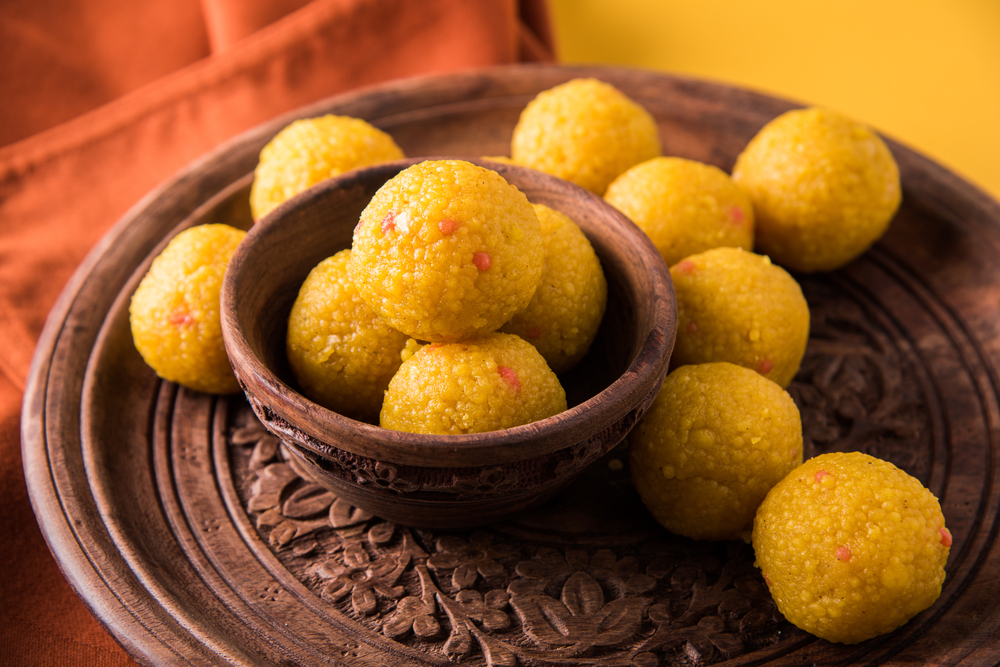 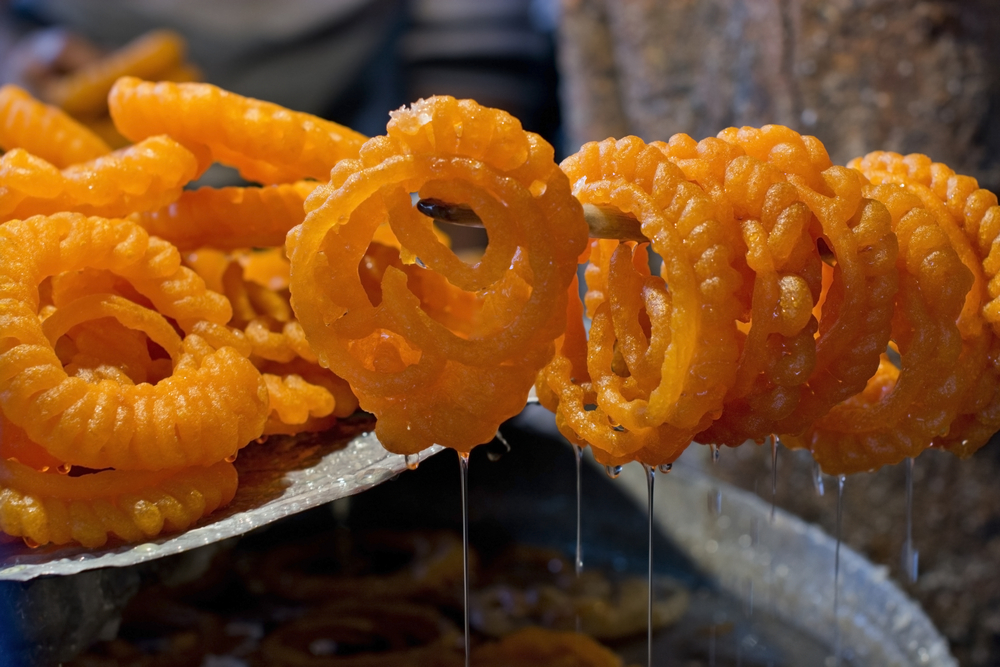 Various Indian sweets can also be your perfect iftar menu. One of the most popular is laddu (or laddoo), Indian ball-shaped sweets made of flour, minced dough and sugar with other ingredients such as coconut, almonds, cashews, dates and spices such as nutmeg and cardamom, poppy seeds, ghee and sugar. Laddu is often served at festivals and religious events. Another popular one is jalebi or zulbia, a pretzel-like fried dough, soaked in sugar syrup. You can buy both sweets in Lulu Hypermarket in Cakung.

Up Next: Susi Pudjiastuti Honored With Seafood Champion Award