During the preparation of Galungan, these series of ceremonies is performed before the big day itself.

Brilio.net - If you are living in Bali, even though you are not into Hinduism, you’ll bump into the ceremonies or rituals the Balinese are performing. During the preparation of Galungan, a Hindu holiday that happens twice a year (but once a year according to Wuku calendar), these series of ceremonies is performed before the big day itself. So you better get acknowledged if you want to watch those rituals—or to avoid traffic jam around the temples. 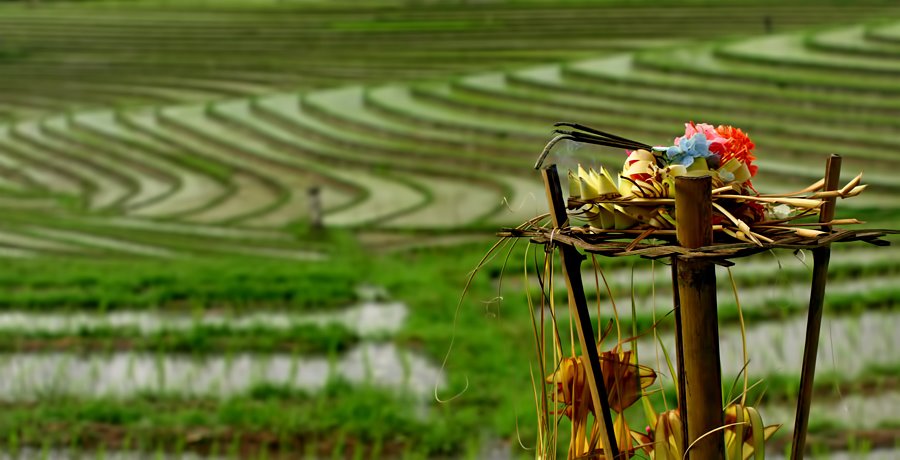 In Çaka calendar, it falls on Sanisçara day, Kliwon, Wuku Wariga, or 25 days before the Galungan. The ngerasakin and ngatagin rituals are performed to praise God Bhatara Sangkara, the manifestation of Hyang Widhi (The Almighty), to pray for the fertility of crops that would bring blessings for human life. It falls on day of Anggara, Kliwon, Wuku Julungwangi or 15 days before Galungan. The ritual performed is to give lelabaan to watek Butha by putting small mecaru in the praising altar (Sanggah pamerajan) and in temple (Pura), also to clean up the area in order to prepare Galungan day. The day is Buda, Pon, Wuku Sungsang or 7 days before Galungan. It is also called as Sugian Pengenten Day or the start of Nguncal Balung. Nguncal means to let go or remove, while balung means bones; philosophically it means to remove all negative powers (adharma). Sugian Pengenten means to remind (ngentenin) human to always be cautious to negative temptation. In the time of nguncal balung (that goes on for 42 days until Buda Kliwon Paang, it is not good for adults to build house, build sacred place, buy livestock and celebrate wedding (pawiwahan). 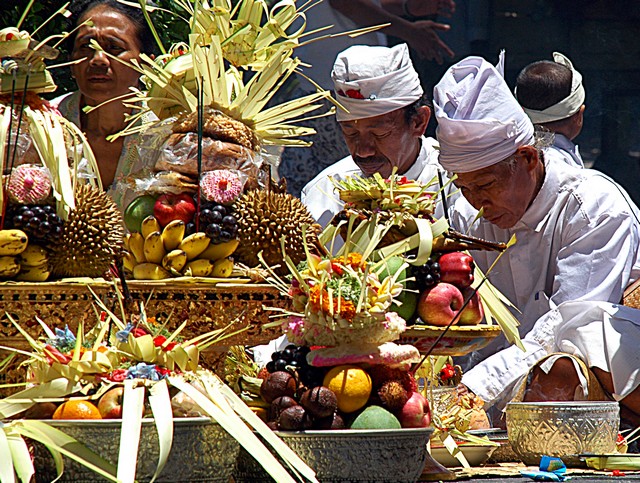 It falls on Wraspati, Wage, Wuku Sungsang, or 6 days before Galungan. The day is meant to praise Sang Hyang Widhi (The Almighty) in temple and praising altar with certain offerings (banten pereresik, punjung, fragrant canang burat, canang raka), to invoke for purity and the preservation of the universe (Bhuwana Agung). The day is Sukra, Kliwon, Wuku Sungsang, or 5 days before Galungan. It is to praise Sang Hyang Widhi in Pura and Sanggah Pamerajan with the offerings such as banten pereresik, punjung, canang burat wangi, and canang raka, to pray for purity and safety of one self (Bhuwana Alit). Falls on Redite, Paing, Wuku Dungulan, or 3 days before Galungan. It is the time of Sang Bhuta Galungan to go down on Earth and tempt human to do negative things. Galung in Kawi language means war; Bhuta Galungan is the human nature that likes to fight. Mankind is advised to strengthen them selves by praising to Lord Bhatara Shiva for keeping those negative characters away. Symbolically, women would brood fruits and make fermented rice/cassava on the day. The day is Soma, Pon, Wuku Dungulan, or 2 days before Galungan. It is the descent of Sang Bhuta Dungulan who seduces human even stronger to do bad things. Dungul means to subdue; Bhuta Dungulan is the human nature that wants to conquer others; to win. It is advised that man to pray to Lord Bhatara Shiva to get those things avoided. Symbolically, people would make jaja, that means to meaningfully removing the dungul character away (nyajaang). 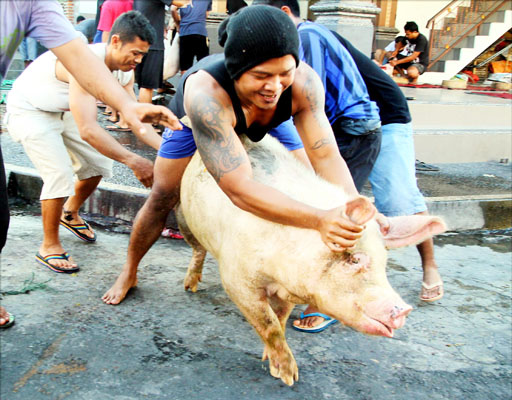 The day falls on Anggara, Wage, Wuku Dungulan, or 1 day before Galungan. It is time for Sang Bhuta Amangkurat to go down and tease human more to do adharma. Amangkurat means in charge. Bhuta Amangkurat is the human nature that wants to rule over others. Humans are advised to fight the temptation by praying to Lord Bhatara Shiva and to conquer the power of the Three Bhutas (Bhuta Galungan, Bhuta Dungulan, and Bhuta Amangkurat).

Symbolically people will slaughter pigs (nampah celeng). Nampa means to be prepared on receiving the arrival of Sang Hyang Dharma. Pig is a symbol of laziness so slaughtering it is a symbol of removing the human laziness. In the afternoon they also stick the penjor (decorative pole made out of young coconut leaf) as a symbol of gratefulness to Sang Hyang Widhi for the blessings. The whole family would do a purifying ceremony to welcome the Galungan. 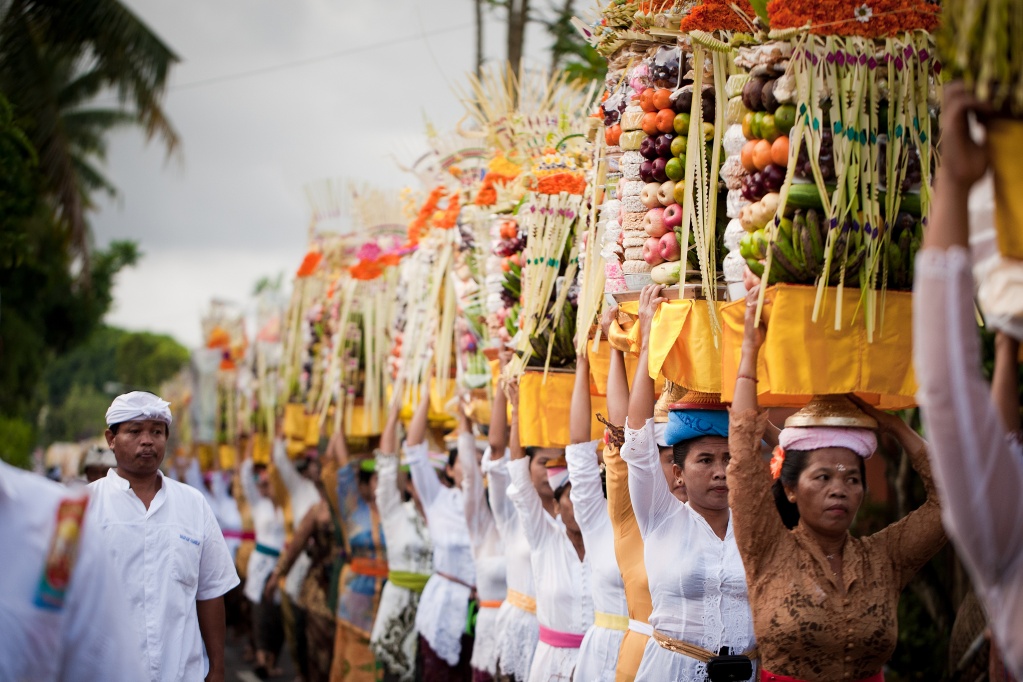 Falls on Buda, Kliwon, Wuku Dungulan, Galungan is the celebration of human victory upon the adharma. Gods and goddesses would go down from the Heavens and bless people. The prayers are done in temple and praising altar to give thank to Sang Hyang Widhi. The day of Saniscara, Pon, Wuku Dungulan, 3 days after Galungan is the last day of Wuku Dungulan. It continues with the prayers to Lord Nawa Sangga, especially to Lord Bhatara Brahma. Day of Redite, Wage, Wuku Kuningan, 4 days after Galungan, the gods and goddesses are returning to the Heavens. Prayers are done in temple or praising altar to give thanks for their blessings. 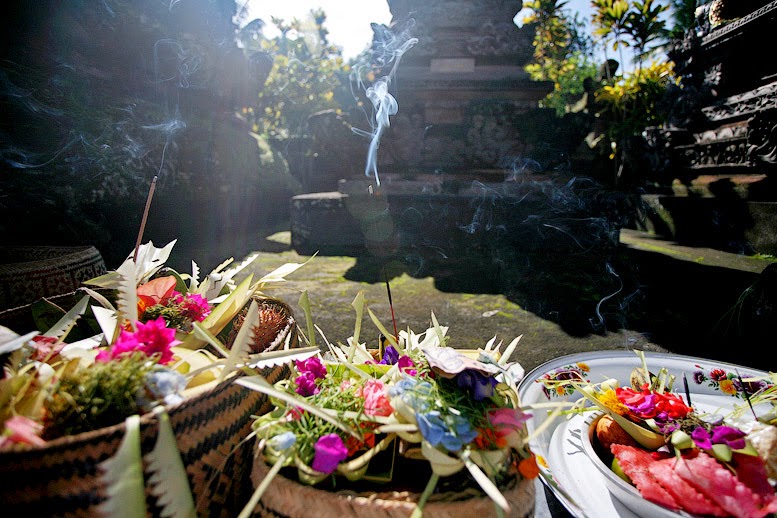 Falls on Soma, Kliwon, Wuku Kuningan, 5 days after Galungan. People do the offerings (sajen or caru) to the Bhutas to stay away from mankind and so the Trihitakarana could be materialized. The day of Sukra, Wage, Wuku Kuningan, is 9 days after Galungan. Humans are preparing to welcome (nampa) the Kuningan holiday. In the night is the last of prayers to Dewata Nawa Sanga, which is prayer to Sang Hyang Tri Purusha (Shiva, Sada Shiva, Parama Shiva). 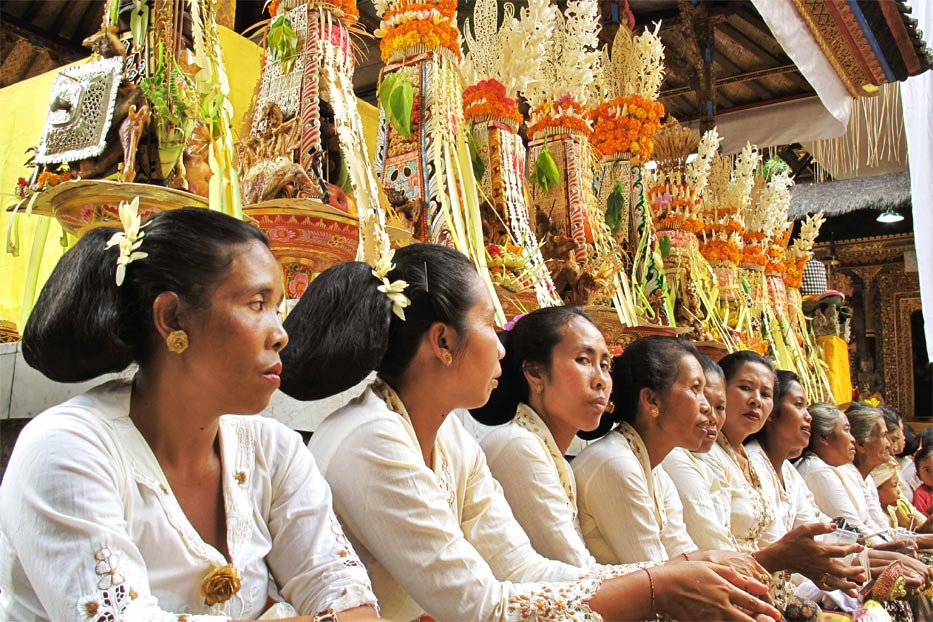 Falls on Sanisçara, Kliwon, Wuku Kuningan, or 10 days after Galungan. The gods and goddesses go down from Heavens until midday. Humans are giving thanks to Sang Hyang Widhi for the blessings and to pray to keep the evil away. Symbolically they will make offerings with yellow rice as announcement (nguningang) to follow the paths of their ancestors to celebrate the series of Galungan – Kuningan holiday. People also hang “tamiang” on the small altars as a shield from the negative powers. The day of Buda, Kliwon, Wuku Paang, one month or 35 days after Galungan, is the last day of the series of Galungan. Pegat means to separate, uwak means failures. Pegat uwakan means “to not fail doing dharma in life after Galungan”. The nguncal balung is over and the cycle of life goes on.

Up Next: The perks of being a firstborn daughter