The story of Taufik Noor who became famous after drawing einstein

Taufik admitted his parents still ask him to be an office worker but he consistently keeps drawing to earn money. Kudos to him!

Brilio.net - A year ago, when Yogyakarta was sprayed by the ashes of Mount Kelud , netizens  were once amazed by Taufik Noor Aditama’s (23) post. A few days after the tragedy occurred on February 14, Taufik drew an image of Albert Einstein using Kelud ashes on his house floor.

The picture he posted on social media suddenly went viral in Indonesia. The video he uploaded on Youtube was also watched by a lot of viewers. Because of this, Taufik attracted massive attention both locally and nationally.

“At that time, I was afraid the picture I made would be misinterpreted as an act of belittling the disaster,” said Taufik to brilio.net/en. Since that time, Taufik has become so addicted to experiment with different media.

Actually, Taufik was not an art or design student. Instead, he was a student of industrial engineering from a university in Bandung.  At his core, Taufik loves art even since he was a kid. Besides painting, he has also explored the art of photography and when he was in Bandung, he often received requests to draw something.  Thus, he was often called as a student who took a wrong major.

“When I came back to Yogyakarta, I wanted to develop my photographic skills but everything changed because of the Einstein picture I made,” said Taufik. 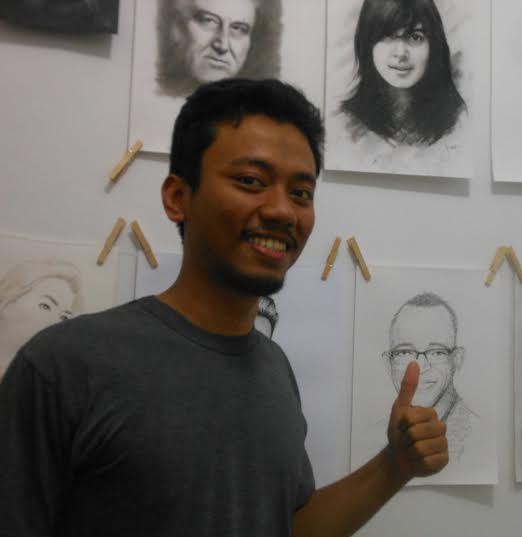 From the various pictures he posted on his Instagram account, portraits of people appear to be the most common one.

“I prefer to draw a figure with character, not stiff poses that face the camera like in ID cards, ” he explained.

Currently, Taufik spend his daily life mostly drawing. He explained that the orders commonly come from cities outside Yogyakarta. Even though he’s doing pretty well for himself, Taufik’s parents still encourage him to be an office worker.

“Most people think that work has to be done outside the house from morning until dusk. Maybe they still believe that if you’re at home, you’re not actually working, said Taufik jokingly.

Up Next: Mosquito repellent lotion to protect members of the army in Papua