Brilio.net - For the first time ever, street workers in Jakarta can have a decent life with enough salary. The governor of Jakarta has changed some regulations that will help those who haven’t been helped enough the “smaller” people. One of the rules is to pay IDR 3.1 million/month for the workers who sweep the streets in the capital city. These people usually come from unfortunate families with low education.

The new regulations require all of the workers to have at least a primary school certificate, but most of the workers do not posses it. It may sound weird but the rule was made to allow the old workers to keep their job while younger high school graduates also aims for these jobs. The certificate will allow them to continue their job contract until 2017.

That is why for the past three months, thousands of workers attend the night school in Palmerah area to be able to do the national test that was held last week nationwide, along with school kids. The school starts at 7 to 9 p.m. three times a week, but they are allowed to have shorter working hours for the test with a permit letter signed by the headmaster.

The workers weren’t so excited with the idea at first, as they were embarrassed to be attending elementary school. They even had to borrow the school uniform and pay the tuition to get the certificate. The school fee is IDR 800,000, and they are allowed to pay in several installments, according to their abilities.

“The most difficult lesson is math, the multiplication decker. (I’m) afraid I can’t pass this one. The others, (I’m) certain I did well,” said a 48-year old contract worker of Dinas Kebersihan DKI Jakarta (Jakarta Cleanliness Agency) Rahim. His duty is to swipe the roads between the Hotel Le Meridien and City Walk, Jalan Jenderal Sudirman, Central Jakarta Pusat. He usually works from 5 a.m. to 1 p.m. but during the test days he was allowed to leave work at 8.30 a.m.

For the test, Rahim studied with help from his child that is now in high school. He wants to provide his child a university-degree education, so he tried hard with the night school and test. Zaenal also has the same dream. The 52-year old man works as cleanliness agent at Jalan Gatot Subroto of Kelurahan Bendungan Hilir and dreams of continuing his study to get the certificates compared to junior and high school.

Even so, Zaenal admitted he wasn’t so confident about his test result. “Well, I’m quite old now,” said the father of 2. But for over 25 years working as road sweeper, this is the first time Zaenal is paid as much as IDR 3.1 million per month. Before, when he worked as janitor in a private company, his salary was only around IDR 1 million.

”Well because the salary is better now, I don’t mind to go to school again,” the third child said joyfully. He went to school in Lenteng Agung before when he was a kid, but only few months before the final test, his father had a stroke that made his family had to close their small shop to pay for the medicine and treatments. Besides, he still has 9 younger siblings.

The workers admit that the new rule was at first brought them down. Going to school had been something that is left far behind in their lives. Not having had a school certificate also brought embarrassment to them as they were viewed as less intelligent.

“Becoming a sweeper I only needed an ID card and family card. But now there are many competitors, young graduates from junior highs and high schools. (I) often get scared (of losing my job),” said 49-year old Chadiroh who works around housing complex in Gerbang Pemuda or Manggala Wanabhakti, Kelurahan Gelora, in Central Jakarta. To Chadiroh, the school certificate will be her safe guarantee to keep working. The shorthaired woman had never attended any school. She learned reading and counting from her friends.

The secretary of Jakarta Education Agency Bowo Irianto said that the Ujian Kejar Paket A (Package A test) is compatible with the primary school national test and followed by 4,866 workers of the Cleanliness Agency, Penanganan Prasarana dan Sarana Umum (PPSU or the Public Infrastructure and Facilities Handling), and the Badan Air (Agency for Water) in, Jakarta. 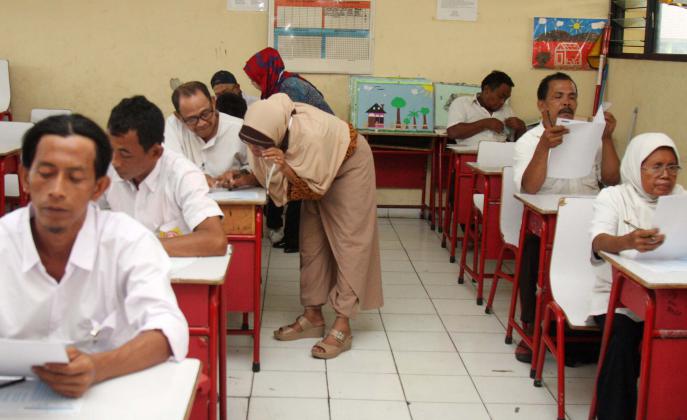 ”Not only Jakarta citizens, the people who take Ujian Paket A are also from other provinces who came to Jakarta to find job. It is the same with the participants of Paket B and C. They try to fix their economy condition and broaden their knowledge by following the programs Paket A, B, or C,” said Irianto closing the interview.

Up Next: Dying to know who were the folks behind Teletubbies? Here they are!