It was so special, because of the cooking process that takes time and at that time not so many were selling it.

Brilio.net - If you ever visited Yogyakarta in the South of Java, Indonesia, you might have been told to try its traditional food, Gudeg. It is the calling for cooked young jackfruit fruits (gori), coconut milk and melinjo (or known as tangkil in Javanese) leaves (Gnetum gnemon). To enjoy it is best served with steamed rice, cooked buffalo skin (known as kerecek) and other proteins like boiled egg, tofu and tempeh, fried kalasan chicken, amongst other delicacies.

The origin of gudeg to becoming Yogyakartan signature food is written by Murdijati Gardjito in “Gudeg Yogyakarta”. It was said that the history of gudeg began as the Mataram Kingdom was built in the Alas Mentaok, Kotagede, in the 1500s. Written in the book: “In the construction of Mataram Kingdom in Alas Mentaok, many trees were cut down, among them were jackfruit, coconut and melinjo trees.”

The excess of young jackfruit fruits, coconut and melinjo leaves had the workers creating food from the ingredients. Many workers began cooking the gori was made in large number as well. To mix it well, the tool used to stir it was a big row-like called as hangudek. The stirring process in cooking the young jackfruit is why the food is called gudeg. 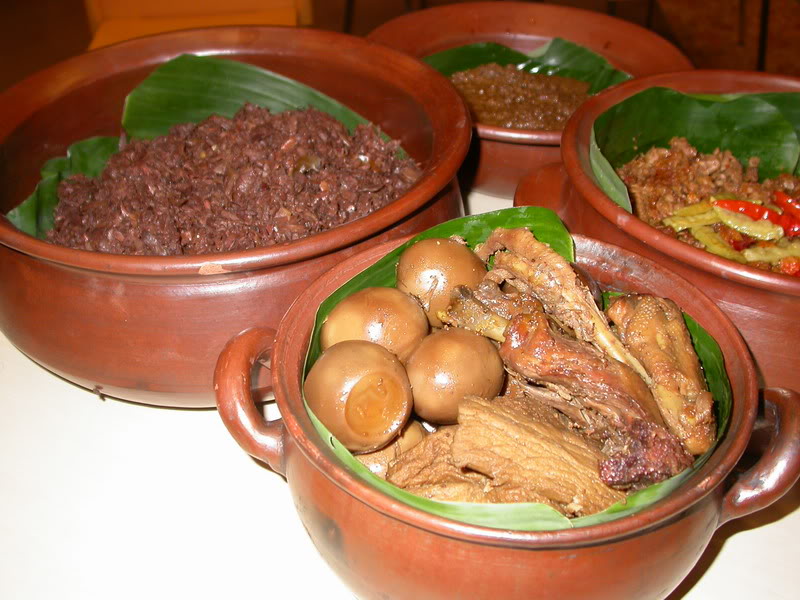 Gudeg was mentioned in Javanese literature Serat Centhini. In it was told that in the 1600s Raden Mas Cebolang was visiting Pangeran Tembayat’s place in Klaten area. Pangeran Tembayat feted his guest with various foods, and gudeg was one of them.

Gudeg was not the food that came from the royal neighborhood. It came from the commoners—worker level to be precise. But for Yogyakartan gudeg is so special that it has become the city’s signature food. In his book, Murdijati Gardjito said that it takes a while to cook gudeg, so even in early 19th century, not many people were selling gudeg.

“It was so special, because of the cooking process that takes time and at that time not so many were selling it, that many people make gudeg as thanksgiving food, as a form of gratitude. It’s like when a kid is sick, he is promised to eat gudeg once he’s recovered,” Gardjito wrote.

In the 1940s, when President Soekarno had an idea to build the Gajah Mada University (UGM) in Yogyakarta gudeg started to be sold in wider range and became well known in society. The concept of dry gudeg was also born at the time, because students from out of town wanted to bring gudeg home. The gudeg is dry cooked inside a clay pot to make it last longer.

The construction of UGM in the Bulaksumur also became the reason why the gudeg central area Mbarek is nearby. “The number of UGM students that needed to eat gudeg made the gudeg seller gathered in Mbarek village. This made the dry gudeg developed well,” said Gardjito, who is also a professor and researcher in the Centre for Traditional Food Study (PKMT) and Centre for Food and Nutrition Studies of UGM.

As time went on Yogyakarta saw a rise in tourism, especially around the Keraton area. This was why the regional government decided to construct a new gudeg central in Wijilan area, in around 1970s. Ever since, gudeg has been the iconic Yogyakartan dish that is easy to find in the whole city. It is also developed into various types, generally the wet and dry. The wet gudeg is where the process is stopped during boiling, and served watery with coconut milk. The dry gudeg is where the process is continued with stir-frying until the food is completely dry. Based on its main ingredients, the variants of gudeg are gudeg gori, which is the most common one with young jackfruit fruits; gudeg manggar with coconut flowers; and gudeg rebung with young bamboo. The latter two are hard to find, but if you seek hard enough, you can find it in some places in Bantul district in South Yogyakarta.

Up Next: 5 Popular types of Instagram photos to get you more likes