Leefa ,an Indonesian woman sits in a room following her arrival at the Ain Issa camp, 50 kilometres north of Raqa, after fleeing the Islamic State (IS) group's Syrian bastion on June 13, 2017.(AFP Photo/Ayham al-Mohammad)

Meet Leefa and Nur, two Indonesians who went to Syria’s Raqqa to get a better live under ISIS, but encountered the exact opposite.

When Leefa set out from Indonesia for the Islamic State group's Syrian stronghold of Raqqa, she says she thought she was headed to an earthly paradise for the faithful.

She and her family imagined being surrounded by true believers and expected free healthcare and jobs paying salaries they could only dream of in Indonesia, the world's most populous Muslim-majority country.

But now, as IS battles to defend its onetime bastion, Leefa and 15 other Indonesians are among thousands who have fled Raqqa in northern Syria.

They are sheltering at a camp for the displaced in Ain Issa, 50 kilometres (around 30 miles) north of Raqqa, waiting to learn their fates as the US-backed Syrian Democratic Forces (SDF) advance inside the jihadist bastion.

In broken English, scattered with Arabic words picked up during their 22 months in Syria, Leefa and her compatriots admit they chose to travel to IS territory.

They tell piecemeal stories, with details missing and lost in translation.

"When we in Indonesia... we read, we watch in the internet, Dawlah Islamiya is a place to live, to become a real Muslim," said Leefa, 38, using the Arabic for Islamic State.

"I have health problems, I need an operation in my neck and it's very, very expensive in Indonesia," she added, her eyes downcast behind her black-rimmed glasses.

"But in Daesh, there's all free, all free," she said, using the Arabic acronym for IS.

"We come to Daesh for become a real Muslim and for my health," she added, her face framed by a green headscarf.

As she speaks, a young girl with the group wearing a purple headscarf uses a flattened plastic bottle as a makeshift fan to battle the heat.

Ain Issa is overflowing with people displaced by the campaign to oust IS from Raqqa province. 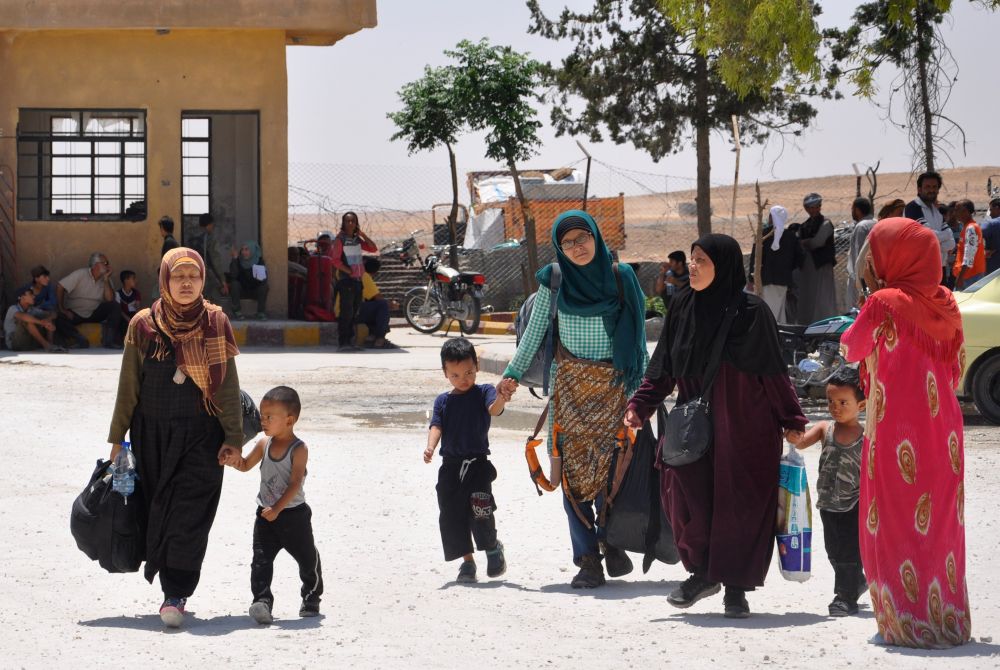 Leefa (C) arrives at the Ain Issa camp, 50 kilometres north of Raqqa, with other Indonesians after fleeing the Islamic State (IS) group's Syrian bastion on June 13, 2017.
© 2017 AFP Photo/Ayham al-Mohammad

Leefa explains haltingly that she was in contact with IS members in Syria over the internet, who told her that those who made it to Raqqa would be reimbursed for their tickets and would enjoy good lives.

But upon arrival, they found the situation harshly different from their expectations.

Leefa discovered the operation she needed was not free after all, and went untreated.

"Everything is lies," said 19-year-old Nur, another of the Indonesians at Ain Issa, her beige headscarf pinned neatly below her chin.

"When we enter Daesh, enter their country, turns out all of them very different from what they said on the internet."

Nur said she and her family expected the male relatives among the group to have jobs.

But when they arrived they were told that all men were obliged to join the ranks of IS fighters.

"Our men enter to the jail, my father, my brother," she said, speaking a mixture of Arabic and English, without explaining when her relatives were imprisoned and why.

And she found she was constantly pursued by IS fighters seeking to marry her, she said.

"There are many divorced (IS fighters), just married for two weeks or two months," she said.

"Many men come to my house and tell to my father, I want your daughter," she said with disgust.

Her brother was even stopped by a stranger in the market in Raqqa, who asked him "do you have some girl or some sister, I want a wife."

"Everywhere they talk about women," she said bitterly.

The stories told by members of the group, among them eight women, three children and five men, are impossible to confirm.

But they match accounts by some other foreign escapees from IS territory who describe being seduced by online depictions that differed vastly from the reality they discovered upon arrival in the jihadist group's self-declared "caliphate."

The SDF fighters now advancing inside Raqqa against IS are interrogating the members of the Indonesian group but expect to free them, said Ain Issa camp official Fayruz Khalil.

"From what I understood from them... they were tricked," she told AFP.

"They discovered that the picture the Islamic State group has painted for them was false... For the last 10 months they were trying to leave, but they only managed in the last few days to flee."

The SDF plans to send the group of Indonesians over the border to the Iraqi city of Arbil and hand them to the Indonesian embassy.

According to Indonesian authorities around 500-600 Indonesians are believed to be in Syria at the moment.

Around 500 more have sought to reach Syria but were deported before reaching IS territory.

So far, authorities have registered over 60 people returning from Syria, who mostly face light vetting before being released without further monitoring, experts say.

IS has provided a potent new force for the country's radicals to rally around, and there has been a string of plots by local militants linked to the jihadists.