This picture taken on May 23, 2017 shows an Indonesian hamlet dubbed

Using bright colors, residents of Wonosari gave their neighborhood a makeover and then, themselves a better livelihood.

The collection of about 200 modest homes on a hillside above a river in Central Java used to be a typical, low-income Indonesian neighborhood that was filthy and gloomy.

But residents of the Wonosari community in Semarang decided an extreme makeover was needed, and received money from the local government and several companies to carry out the project.

The houses were re-painted in a dizzying array of colors during a month-long overhaul which cost about $200,000, and the polluted river nearby was also cleaned up.

The local mayor opened the newly decorated hamlet on Java island to the public in mid-April and the community quickly became a local landmark known as "the rainbow village".

The buildings — many of which are decorated with art such as pictures of angels' wings and whales — can be seen for miles around, climbing up the hillside like a gigantic staircase. 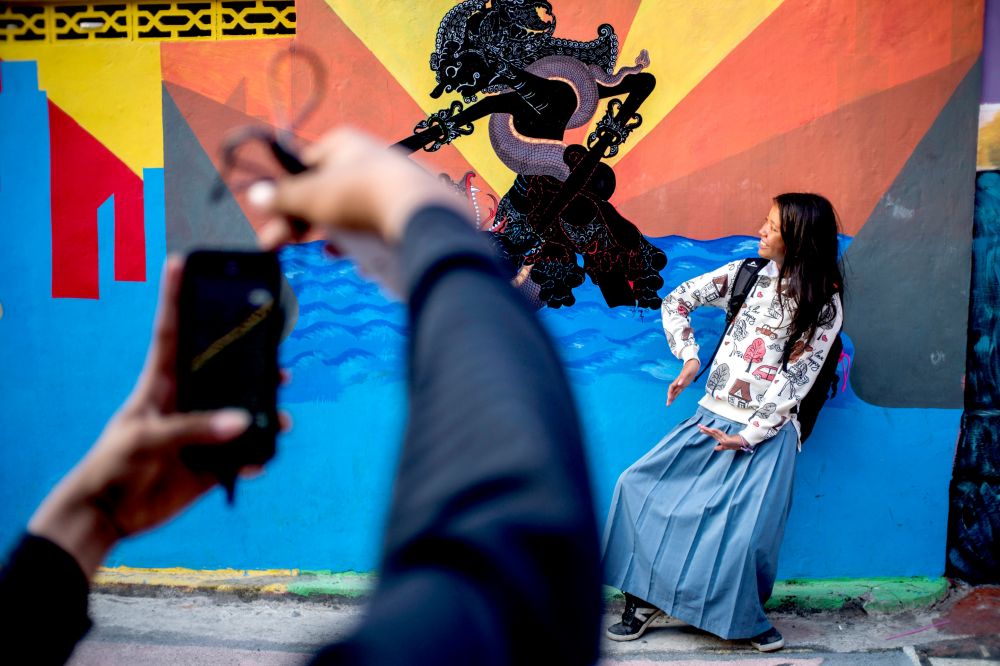 This picture taken on May 23, 2017 shows visitors posing for photos along a path at an Indonesian hamlet dubbed "the rainbow village" in Semarang, central Java, that has become an internet sensation and attracting hordes of visitors. (AFP Photo/Suryo Wibowo)

Domestic and foreign visitors have been flocking to the village to snap pictures, which have been rapidly spreading on Instagram and Facebook.

"This is very special, extremely creative," Maya Susanti, an Indonesian visitor who came to the village with her friends told AFP.

"The village used to look plain but now there are so many good spots for taking pictures."

Community leader Yosep Tri Prawoko added: "Every single alleyway has become a favorite spot for a photoshoot, it's great."

Villagers are enjoying the tourism boom sparked by the makeover.

Surani, a local flower seller who like many Indonesians goes by one name, said local people were feeling the benefits: "I hope our livelihoods keep on getting better."

The makeover and flow of visitors has also encouraged residents to keep the community clean, and rubbish bins have been put up around the hamlet.

Up Next: Sriwijaya Air Plane Slides Off Runway In Manokwari