Brilio.net - Ridwan Kamil has been mayor of Bandung since 2013, winning praise for how he runs the city. He is hugely popular with citizens in West Java’s capital, but it’s his mastery of social media that really makes him a star!

The 44-year-old Bandung native, known affectionately as Kang Emil (“Brother Emil” in Sundanese), is an urban planning architect who has earned national recognition, Ridwan revitalized public facilities in Bandung and brought in popular initiatives from wearing traditional clothes every Wednesday to riding a bike to work.

Ridwan has 3.7 million followers on Instagram and calls himself “the caretaker of lovely Bandung. Forever a happy soul. broadcasting daily happiness to you,” in his profile. Ridwan shows off his sympathetic side, supporting a very single user surrounded by couples. Reposting from @neniiasni’s account, Ridwan wrote “Follow Neni’s account, who has been patient and strong facing the tough temptation during this Ramadan month.” 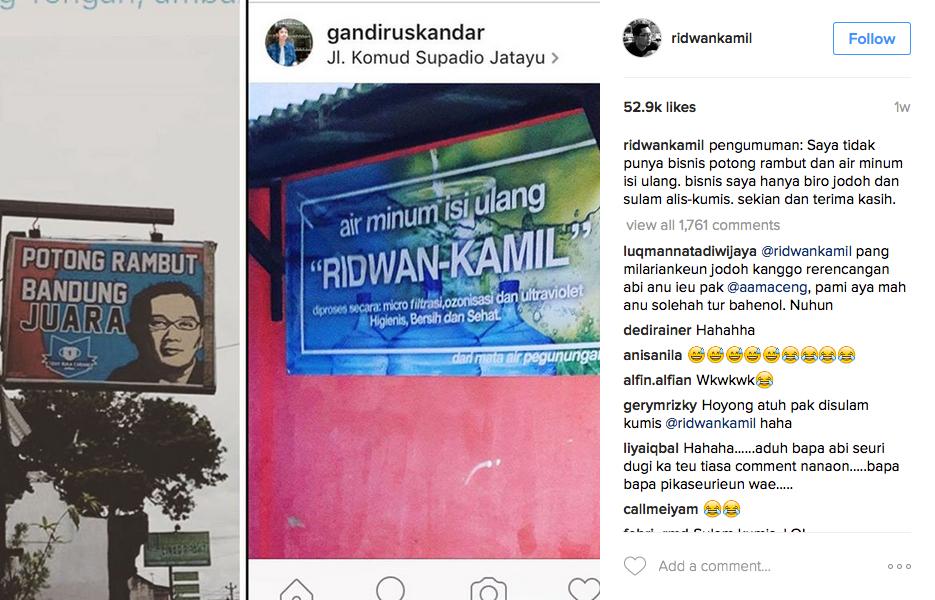 Ridwan’s face is so well-liked that people used his face to advertise their businesses, but the man had a sense of humor about it! Reposting from two other accounts, Ridwan wrote: “Announcement: I do not own the barber and mineral water refill business. My businesses are only a dating agency and an eyebrow-moustache embroidery. That’s all and thank you.” The handsome young politician is very popular with female voters! During a visit to a local hospital, a pregnant woman asked him to put a hand on her belly! He wrote: “In Santo Yusup Hospital, a sick pregnant woman had a craving for me to stroke her belly. If I didn’t stroke it, I was afraid she would get cranky and give birth right away. I fulfilled her craving.” 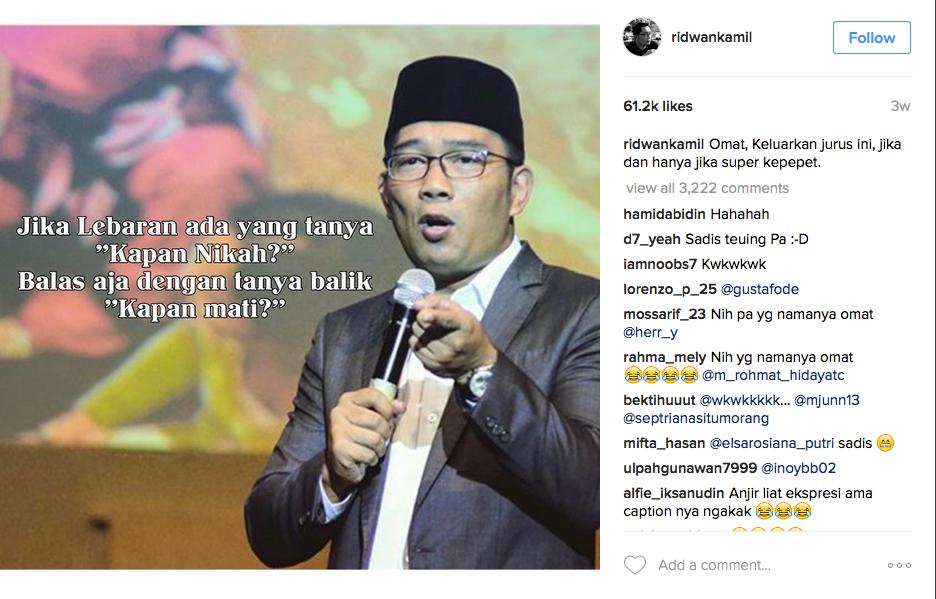 Ridwan posted this before the Lebaran holiday, when families get together to celebrate the end of Ramadan: “If at Lebaran someone asks you ‘When will you get married?’, reply with ‘When will you die?’” - He perfectly captures the generation gap and the question every young Indonesian gets asked by their elders! 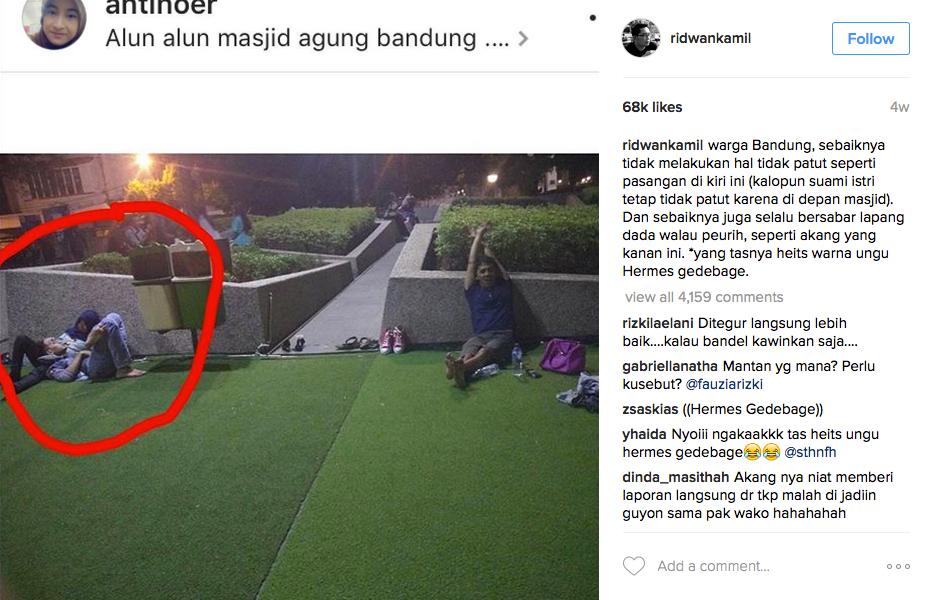 The mayor also knows how to please both sides of the political spectrum reposting from @antinoer’s account, Ridwan wrote: “People of Bandung, it is better to not act improper as the couple on the left did (even if they are man and wife this is still improper because it is in front of a mosque). And it is good to be patient all the time even though it hurts, like the young man on the right. *whose bag is a fabulous bright purple fake Hermès.” You might have expected a bigger reaction to him shaming the young couple - but commenters were way more focused on the bag! “Which one is more stressful, getting chased by a T-rex, chased by the ‘when will you get married’ question, or chased by an ex who looks like Valak?” While promoting a local theme park, Ridwan gets props from Indonesia’s horror-loving young people for his reference to the ghost in The Conjuring 2. 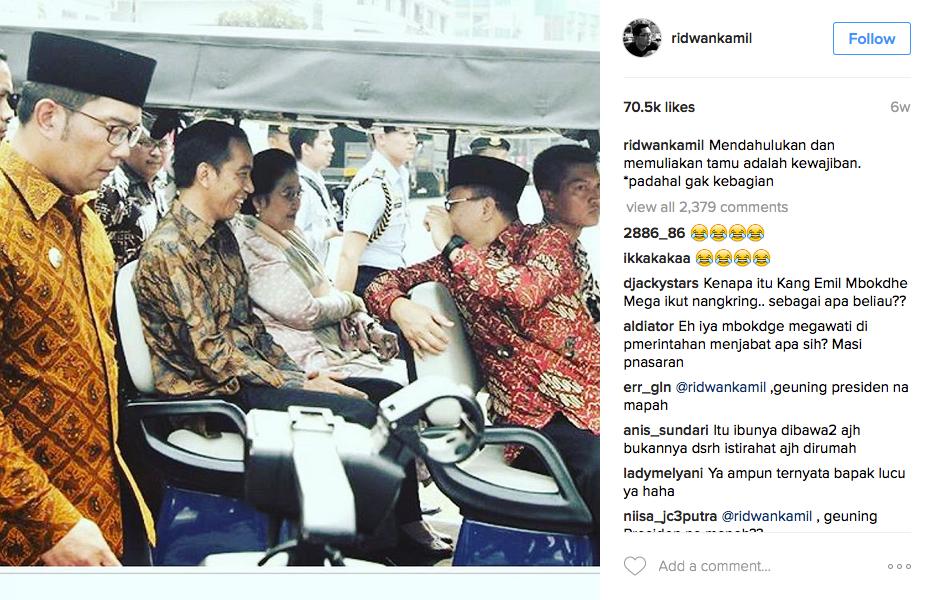 Ridwan posted this candid shot of him walking next to a buggy carrying President Joko Widodo, Vice President Jusuf Kalla and former president Megawati Soekarnoputri with typical good humor: “to prioritize and glorify guests is an obligation.” On a trip to nearby Bogor at the invitation of the city mayor Bima Arya to celebrate its 534th anniversary, Ridwan took this WE-fie, saying “behind the selfie men there are patient wives” - showing off his friendship with the fellow West Java politician.

HE IS INDEED OUR MOST LOVED MAYOR! CLICK NEXT TO SEE HIS OTHER POSTS!

Up Next: How well do you know Ratna Sari Dewi, Soekarno’s beautiful wife?