'Why We Defend The Islamic Defenders'

We've heard from the leaders, now it's time for the protesters to tell their side of the story.

Jakarta's election will conclude in less than a month, but his case is expected to continue at least until May.

So far, we have seen four massive rallies demanding the governor's imprisonment and impeachment — the 112, 411, 212 and 313 rallies — and numerous weekly protest held in the capital.

The coverage on the rallies are omnipresent, but we've never really got to know those rallying for a cause that almost divides the people of Jakarta. We've only the leaders' sides of story, from Islamic Defenders Front (FPI) leader Rizieq Shihab and his cronies, prominent clerics like KH Abdulla Gymnastiar to the police chiefs like Gen. Tito Karnavian. So I went to the rallies to meet those who were willing to spend the day on the street and let them tell their stories. 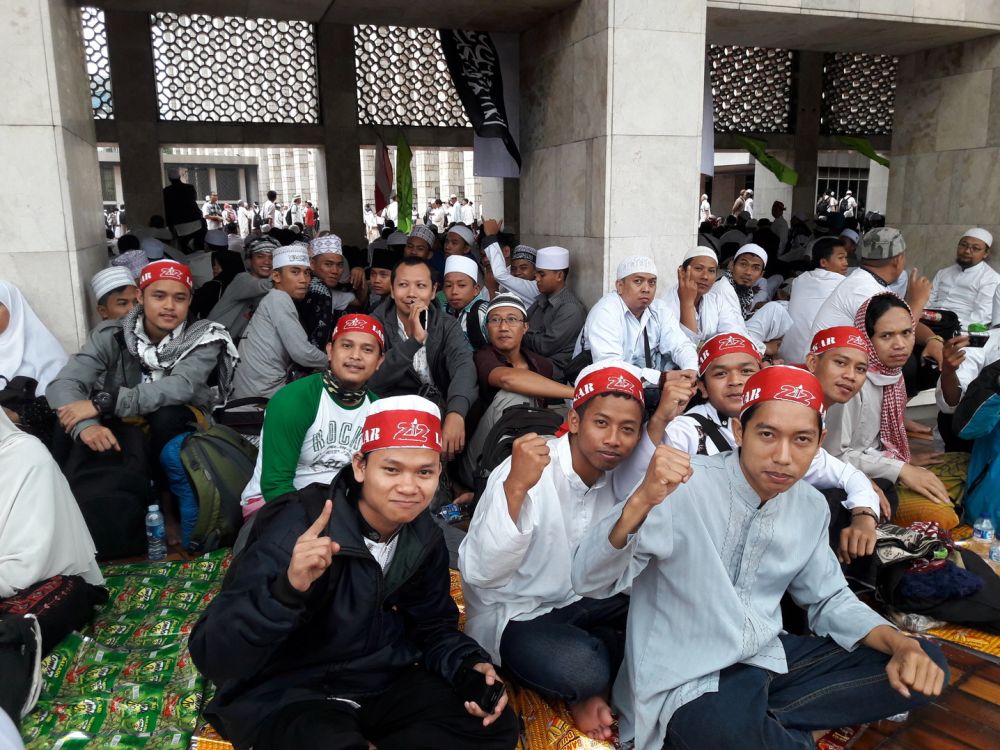 During the 212 rally on Dec. 12, I met Rachmat and his friends who came all the way from Sukabumi and Bogor in West Java. They told me that they attended the rally as it was what their conscience told them to do.

“We were moved by the previous rallies and came here to follow our conscience. We see the political turmoil happening in our country lately and the government seems to be oblivious to the situation,” Rachmat said. "We would've regretted if we don't come here."

He also expressed his sympathy to Rizieq Shihab, FPI and the National Movement to Safeguard the Indonesian Ulema Council's Fatwa's (GNPF-MUI) 'struggle to uphold the sentence of God'.

“Habib Rizieq is a modern Islamic leader like no others,” he said. 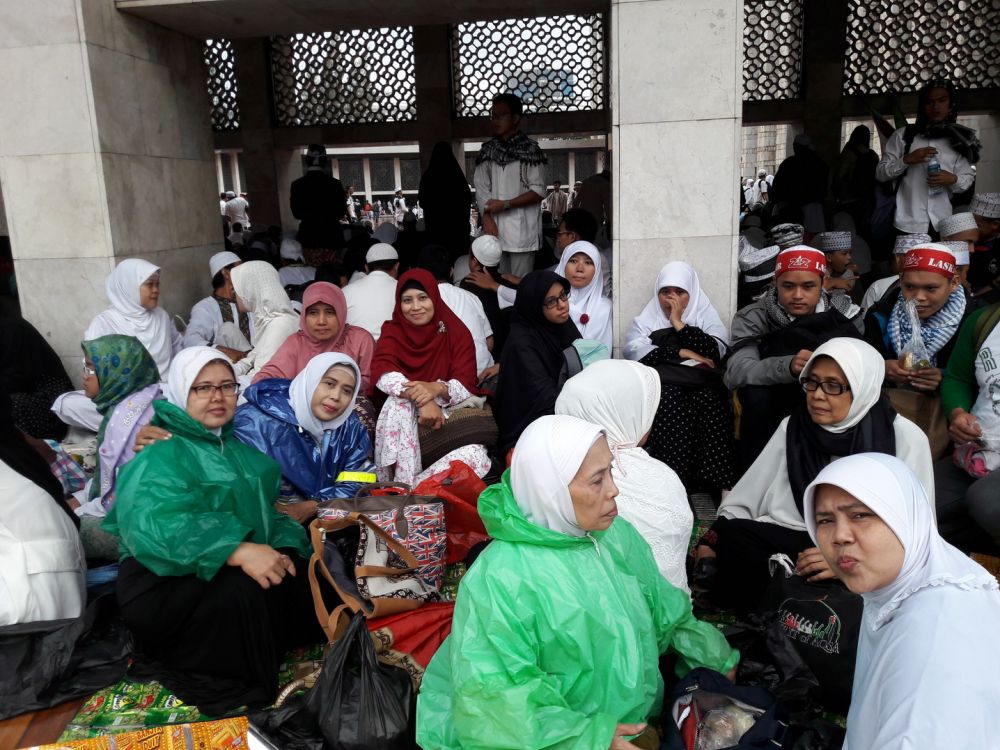 There were also a group of women from a congregation in Yogyakarta who left their hometown for the rally three days before the big day.

“We came from Yogyakarta. Although we’re only a few, we want to do something for this country and for fellow Muslims,” said an unnamed woman from the group to me. “We’re happy to be here because we wanted to join the previous rallies but we didn’t have the chance to do so.”

They also told me that they were impressed by FPI and Rizieq.

“In this modern time, a figure of ulema like Habib Rizieq is so hard to find. This country needs someone not only to preach and told us to do good (amar ma’ruf), but also to do nahi mungkar (to forbid the wrongdoing).  As for now, only Habib Rizieq and FPI dare to do so. They fear nothing but God,” she said. 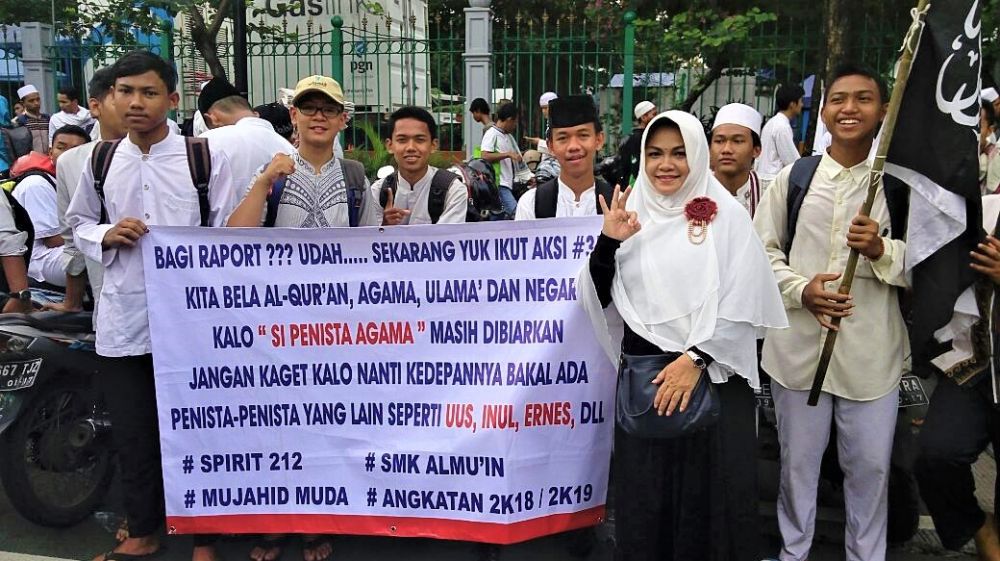 I came to Friday's 313 rally to seek answer from the rally participants and like what I encountered during the 212 rally, they also shared the same anger towards Ahok and admiration for FPI and its leader.

First, there was Abu Umar Ali from Tangerang. I could tell that he's a staunch supporters of the cause as he took part in 112, 411 and 212 rally before. However, he told me that his support is not exclusive to FPI, but to all who will fight for justice against Ahok.

“What drives me the most is our demand of law enforcement towards the blasphemer has not been answered until today. Then, there's a good feeling we feel after joining every rally. Muslims in Indonesia are moderate and tolerant but often misunderstood. We will continue to take action as long as the law is not enforced," he said with a fiery tone.

"Some of us are angry because they think that the government and officials are taking Ahok's side," he added. "The integrity of the Republic of Indonesia is under threat but people are busy with social media, uploading photos of food from fancy restaurants and all."

Then, I met Wenny from Jakarta (the only woman in the picture above) who also joined the 212 rally.

“I support FPI because we share the same mission. We want to defend Islam, to conduct amar ma'ruf nahi munkar (do good and forbid the wrongdoings) and to strengthen the bond between Muslims in Indonesia,” she said.

Erwin, who was in the same group photo, said that he's defending his religion by going to the streets.

"Not only FPI, anyone who is consistent in defending Islam will be supported. It is our defense for the religion of Allah," said the three time rally participant. Meanwhile, Yaman from Surabaya, said similar thing, but with an additional motivation.

“This is a call from the heart. I am very sad to see a man who insulted my religion belief proudly occupying the office of governor, leading government meetings to make policies. I often hear about Muslim workers in government offices who are found guilty of a mistake, they will immediately be fired without being given a chance. I have come to seek justice for them as well, he said.

With no finish line in sight, maybe Yaman and other protesters will need to take more time to get back to the streets to express their aspiration should a catchy date come again.

Up Next: 322 Million People Are Living With Depression, Says WHO