Brilio.net - Former President of Indonesia Susilo Bambang Yudhoyono said he had a premonition of Mike Mohede’s death when the late singer sang Don't Forget to Remember Me at his 40th wedding anniversary celebration with wife Ani Yudhoyono in Sarinah, Central Jakarta, on Saturday.

“At the end of the celebration, when (he sang) the last song, I and all the guests that night knew there is something about the song which he sang along with Vina Panduwinata and Lala Karmela. It was Don't Forget to Remember Me,” recalled SBY. 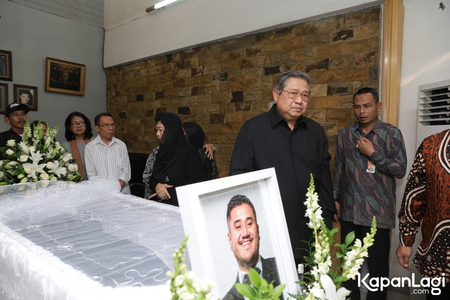 “I believe that the last song he sang (implies a message) to the public. Like (the lyrics in) the song, we won’t forget about Mike Mohede. Believe me, this is God’s provision and is the best way for him,” he added.

“People may know that only two days ago, on July 30, when we were holding our 40th wedding anniversary celebration, Mike Mohede was on stage with two other singers. At the time, Mike looked so relaxed, fine, his voice was mellifluous and smooth. He was at one of his best performances,” said SBY.

In the wedding anniversary, Mike also sang Juwita Malam, To Love Somebody, and a song composed by SBY himself, Kuyakin Sampai di Sana. Up Next: Fellow Idol contestants Regina and Kamasean mourn for Mike Mohede