Balinese village Penglipuran names the cleanest in the world

Another reason to say that Bali is a land of paradise!

Brilio.net - Bali is known as the most favourite holiday destination for international tourists, and home to so many migrants who find peace and home on the small island. The island that is full of cultural tradition and natural beauty has made it so special and won the award as The Most Beautiful Island in the World in 2015 and 2016, according to the readers’ choice in travel magazine CN Traveler from Moscow, Russia.

Apart from the beauty, Bali is also credited for its cleanliness. Penglipuran Village has been named the top three cleanest villages in the world, next to Giethoorn Village in the Netherlands and Mawlynnong Village in India. Located at 700 meters above the sea in the Bangli Regency, north of Gianyar, the village is famous for its special architecture that features the same shape in each of the buildings along the road. No motorized vehicles are allowed to enter, which makes the village even more peaceful—only bicycles are seen as transportation.

Besides being free from pollution, the 112 hectares village is also free from garbage strewn mindlessly on the streets. It is tidily organized to follow the ancient rules of a village. The houses are arranged on both sides of the road, from upstream to downstream, with the main building located on top. It might look like the villa compounds that are found all around Bali now; only this one is the original prototype with real Balinese people living there. Penjor, the yellow coconut arched poles that placed in front of the houses on special occasions, add a more sacred feel to the neighborhood. The natural scene as the background creates an impression of living in heaven, or perhaps it is where the “paradise” term often used to refer to Bali comes from. 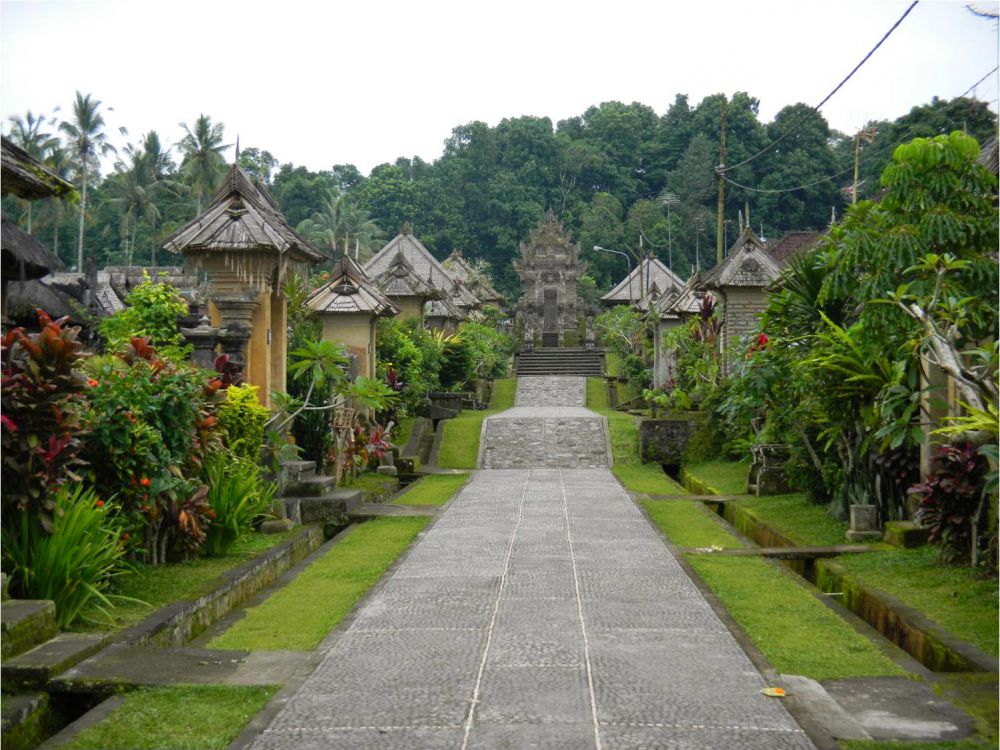 The name Penglipuran in Balinese means pengelingan putra, which is a close relation between responsibility and task in completing the religion’s duty. Penglipur also serves as a reminder to the ancestors. The people in this village believe that their ancestors came from the northern village Bayung Gede in Kintamani, still in the same regency of Bangli. Before Penglipuran, the people were known as Kubu Bayung, who got the King’s order to build a project in the current location. Those people then liked the area and decided to stay to make a new village.

The village is now a tourist destination where people can visit, take a look at their daily activities inside the homes, and see how living in such natural village would feel like. The price for adult visitor is IDR 30,000 and for children is IDR 25,000 per person.

Up Next: 17 Painstakingly detailed drawings formed by thousands of tiny dots