People paraded on a tank during the attempted military coup in Turkey (Photo: ABC)

Under the storm of bombs and bullets, they had nowhere to run

Brilio.net - Jeff and Diana are Indonesian travel bloggers who have traveled to many parts of the world. They’ve had plenty of wild experiences, but perhaps their last journey around Europe will be the one they remember for a lifetime.

The pair were trapped in Istanbul's Ataturk Airport in Turkey during the coup attempt against President Recep Tayyip Erdoan on July 15.

“We’ve never imagined such thing could ever happen to us because we were in a group on a free city tour earlier that day and everything seemed fine,” Diana told Kompas Travel.

They eventually separated from the tour and left for the airport. At 10 p.m. local time, they were strolling around Ataturk's shops while waiting for their flight, which was scheduled for 2 a.m.

“Suddenly, our couch surfer (host) in Helsinki sent a message on Facebook, asking if we’re okay because he heard about unrest in Turkey. I Googled it immediately,” recalled Diana. Jeff and Diana via Pasangan Traveling

As Jeff and Diana learned of the coup attempt, flight information screens at the airport began to switch. Over 100 flights were delayed, and desks usually filled with staff, were suddenly empty. The staff left at the Turkish Airlines counter didn’t want to answer any questions.

“They didn’t want to talk at all. Maybe they don’t want to be presumed to be taking a side,” said Diana.

Diana’s WiFi suddenly disconnected. She tried to search for an Internet connection in another area while Jeff remained at their boarding gate. However, shortly after that, Diana heard people running in panic and screaming, “Shooting! Shooting!”

“I was panicked in that situation. At first, I ran, but then I decided to go back to Jeff,” she said.

There were three waves of fighting at the airport.

After the first exchange of gunfire and explosions, people ran for cover anywhere they could. 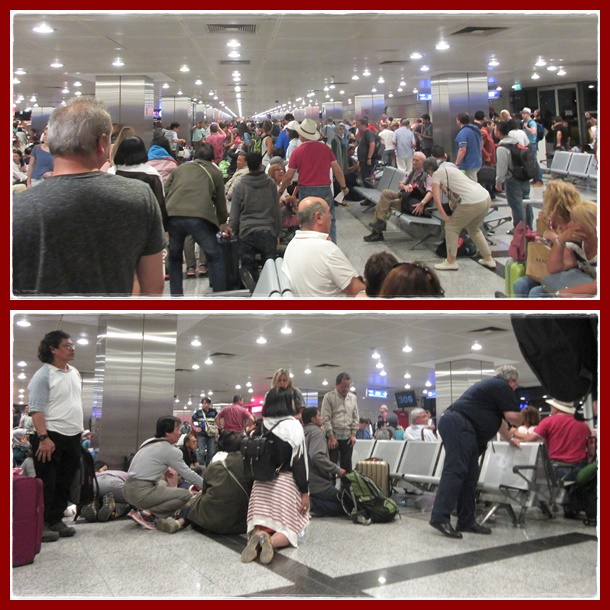 Situation after the first attack via Pasangan Traveling

“While people were running after a shooting, we chose to take cover behind a wall. If we run, we’re afraid of being trampled,” said Jeff.

The second wave occurred around 1 a.m. when Jeff was about to go to the toilet. People were screaming once again, while dozens rushed to take shelter in the toilet. After the second attack, people came distributing drinking water for those in the airport, but the coup was far from over.

Around 3 a.m., just as Diana and Jeff began to relax, the third wave hit.

They heard combat aircraft flying low, followed by the sound of explosions. The building shook, and Diana and Jeff said they could see fear in their fellow passengers' eyes.

Diana: “In such a situation, all I can do is give up. I didn’t have any idea about the situation. The explosion occurred many times and for quite a long time. It’s kind of traumatic.” 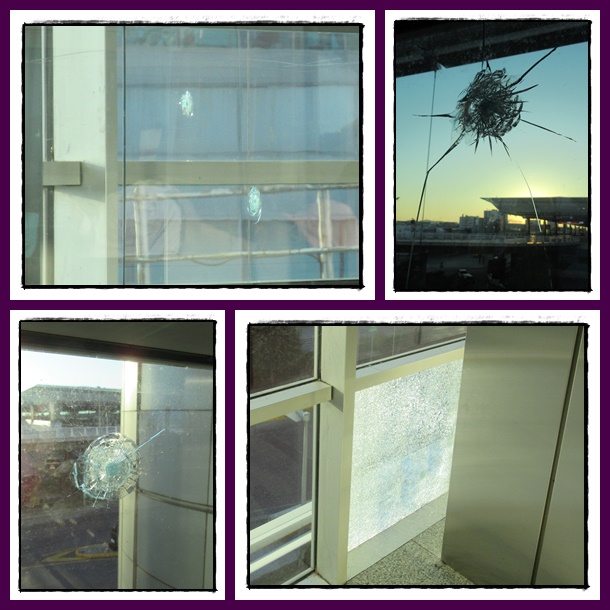 The broken windows in the airport via Pasangan Traveling

After the third wave, Jeff and Diana tried to sleep until the morning came.

Slowly, the airport started to come back to life. Airport staff and officers came, and eventually, Jeff and Diana were called to board their flight at 1 p.m. local time.

There was a final moment of drama after the bus taking Jeff and Diana to their airplane was ordered back to the terminal and they were ordered off for their safety.

Fortunately, they were eventually sent back on and made it to the plane.

“Although the take-off took quite long, it was a great relief once we arrived in Jakarta. Up there on the plane, we were afraid of the air raid and combat aircraft,” said Diana.

Jeff and Diana are prominent travel bloggers in Indonesia, and they’ve launched a book entitled Pasangan Traveling (The Traveling Couple) about their experiences while visiting 22 destinations in the world, from 2004 to 2015.

Up Next: 8 Places to visit if you’re not afraid of heights!