Dad makes fairytale costumes for kids and the results are incredible!

Brilio.net - Most kids love dressing up as characters from their favourite fairytale movies, but not all of them even had a chance to do so. But this man’s children are lucky, because while costumes and carnivals are usually things left up to mommy, in their case it’s daddy who takes charge in making their dreams come true.

Meet Nephi Garcia, a 32-year-old fashion designer and father of three who lives in Orange, California. For the past nine years he worked in high fashion, but things started to change when his kids were born.

“Once I had kids, it started to feel like the industry wasn’t really working for me,” Garcia told BuzzFeed.

Last year, when the family planned a trip to Disney World, 6-year-old Lili asked her dad to make an appropriate costume to be worn in the theme park. Since then, Garcia’s started to uncover his hidden potential for creating out-of-this-world fairytale costumes from scrap.

And that’s how he transforms into “Designer Daddy,” much to the delight of his little ones, Lili, Eddy, and Leo.

Here are some of Garcia’s masterpieces:

1. Each piece is meticulously crafted to be a wearable work of art, like this Alice costume for daughter Lili.

It's been a while since I've made Lili a dress, so here's a surprise #lolita inspired Alice dress for her tomorrow!!! Also, we have a surprise for you guys this week! Hint* it involves a small Alice... And singing... With @bethaniegarcia so keep an eye out!!! #disney #designerdaddy #aliceinwonderland #cosplay #costume #disneycosplay #alice #aliceinwonderland #bethaniegarcia #musicvideo

2. Lili and her mommy Beth in fairy godmother costume daddy made for the Disney World trip. Garcia made it from scrap fabrics, and people instantly started freaking out. 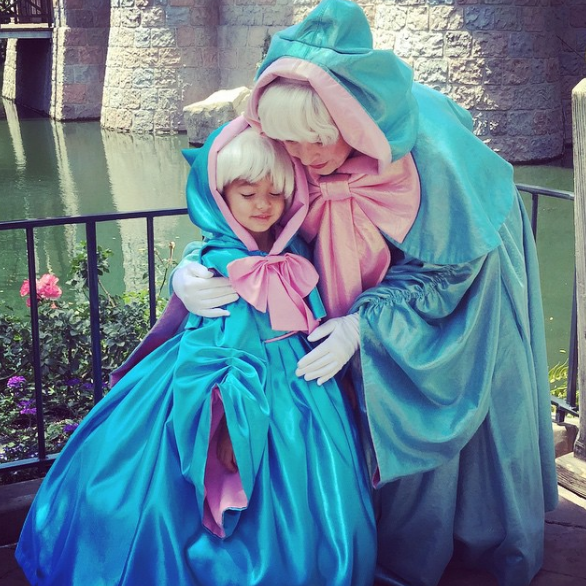 3. Garcia’s dresses with floating veils carried by birds are particularly amazing. “I try to make costumes that go outside of the box,” he said.

"A dream that you wish will come true" #cinderell #designerdaddy

4. To make these dreamy costumes a reality, Garcia used some wire and two fake birds. “I altered the birds’ wings to make them look like they were flying,” he said. 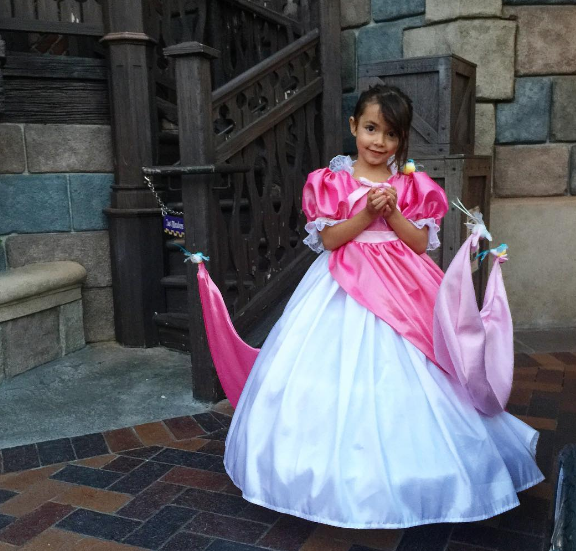 5.  It takes Garcia roughly four to six hours to make one of his children’s costumes.

#flashbackfriday when Lili made the perfect little #Belle! Can't wait to be back at the parks on Monday!!! See you soon @disneyland!!! #designerdaddy #beautyandthebeast #beourguest

"New and a bit alarming Who'd have ever thought that this could be?" Belle #beautyandthebeast #belle #designerdaddy #disneycosplay #disneyprincess #princess #cosplay #costume

6. “I hate repeating designs, so I always try to vary each dress so that they’re unique,” he said.

7. When the family was at Disney World, people were asking for Lili’s autograph and Garcia got orders for ten more costumes right on the spot.

8. Garcia uses a lot of organic silk and gets materials shipped from Europe. “I don’t charge cheaply, but I also don’t deliver a cheap product,” he said.

10. “And my son really loves to be dressed as the villains, especially Gaston.”

No words... I can't believe I made this... I want one in my size now... #princephillip #paradeoffantasy #wdw #cosplay #costume #designerdaddy @littlepanatdland

I'm in love with this #beast inspired long tailed tuxedo!!! Overnighting this today with its vests, and ascot tie #beautyandthebeast #designerdaddy @littlepanatdland

11. Adults also frequently ask Garcia to design for them, and the costumes are equally stunning.

I LOVE this photo!!! Thank you @princessperplexity for tagging me! I wanna inform you guys ahead of time that I will be closing my etsy shop September and October! So if you guys want Halloween costumes, you'll have to order earlier to ensure superb quality and will get to you in a timely manner #designerdaddy #costumedesigner #cosplay #costume #cinderella #princess #ballgown #disneyprincess #disneycosplay #disney

Check out this amazing photo of @tracihines in my #Anna dress!!!!!!! Thank you Traci!!! And thank you @songstaforlife for taking it!!!! Can't wait to see this project finished!!! #designerdaddy #annaofarendelle #anna #cosplay #costume #disneycosplay #disneyprincess #tracihines #musicvideo #music

Up Next: The magical video of Disney’s opening ceremony in China