Trump Met by Women Dressed as Handmaids in Poland

The latest in a string of similar protests.

Activists marched through the streets of Warsaw waving rainbow flags and holding signs that read ‘Dumb Trump’ and ‘Together Against Racism.’ In a show of solidarity, the women ripped up their white bonnets in unison. Thursday’s protest is the latest in a number of similar demonstrations attracting media attention. 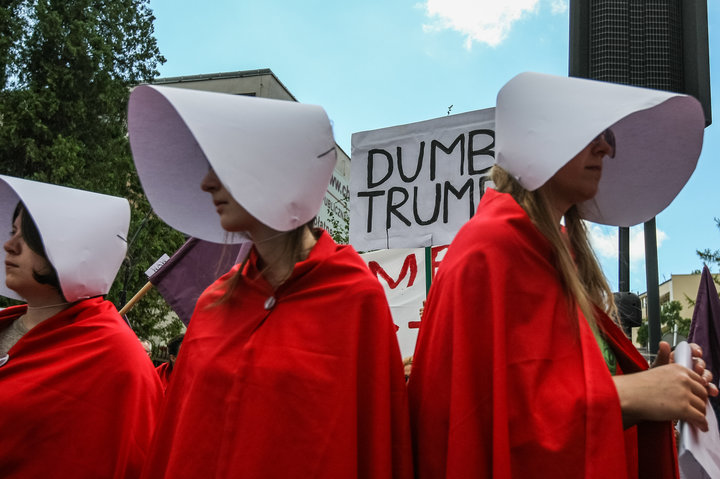 ‘The Handmaid’s Tale’ details a dystopian future in which women are property of the government and their reproductive rights are supressed. Comparisons have since been drawn between the novel and America’s current political climate.

Now a symbol of unity, Atwood’s novel has ignited a global movement to defend women’s rights against the Trump administration and its rollbacks on reproductive and health care coverage. Demonstrations have taken place in Washington DC, New Hampshire, Ohio, Missouri, Texas, New York and since Thursday- Australia and Poland.

A rat in a maze is free to go anywhere, as long as it stays inside the maze.#HandmaidsTale pic.twitter.com/k6S9OlvMTF

Prior to the Warsaw protest, organisers held gatherings to sew the capes and create the bonnets, with fabric tips and sewing patterns shared on Facebook. While Margaret Atwood refrained from directly commenting, she has retweeted a number of news articles in support of the protest.

Up Next: Bambang Pamungkas Named 'Asian Football Icon' By AFC