The giant statues are put to entertain children while parents donate to their coffers.

Superheroes are coming to the rescue of Thailand's temples, where monks have commissioned giant statues of comic book icons and toy robots to entertain children while parents donate to their coffers.

Instead of the traditional tranquil Buddhas and mythical beasts that adorn most monasteries in the land, the shimmering Wat Ta Kien temple outside Bangkok is guarded by three towering Transformer robots.

The enormous and intricate sculptures, made from bits of scrap metal and painted bright orange, yellow and blue, "have no spiritual purpose", explained monk Pra Vichien.

"It's for children so they won't get bored when they come to the temple with their parents," he said.

Other temples are following suit in a country whose monasteries compete to draw visitors and keep donations flowing. 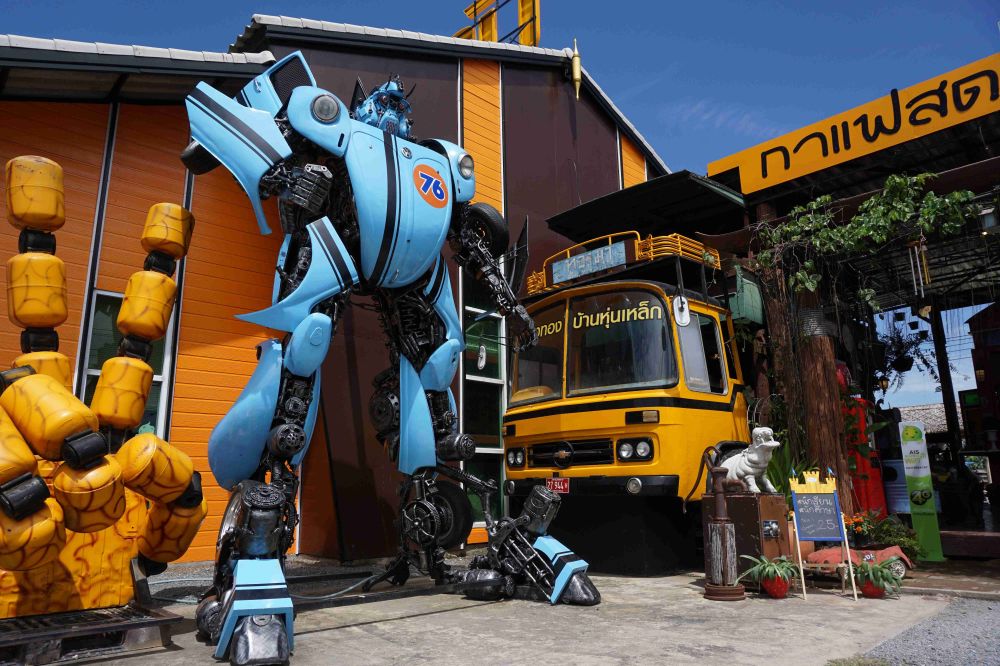 This photo taken on June 13, 2017 shows a statue inspired by the Transformers franchise in front of Ban Hun Lek, a metalworks shop renowned for giant statues of Transformers, the Hulk and other pop icons, in the central Thai province of Angthong.
© 2017 AFP Photo/Lillian Suwanrumpha

At least four Buddhist temples across Thailand and a meditation center have bought superhero statues, according to Pairoj Thanomwong, the Thai artist who runs the workshop where the sci-fi monsters and comic book figures are manufactured.

Armed with blow torches, heaps of metal bolts and twisted car parts, the artists piece together the elaborate sculptures in a warehouse in central Thailand called "Ban Hun Lek", which translates to "House of Iron Robots".

The largest sculptures — around seven to eight meters high — can be sold for thousands of dollars, he said.

The factory also sells its wares to local restaurants and bars but its biggest customer base lies abroad, especially in Europe, with around 80 percent of sales made to overseas clients who have seen the statues on social media.

Pairoj started with comic book classics but has expanded production to include everything from steely desks and chairs to polished replicas of luxury cars and motorcycles.

Nearly 90 percent of the materials are recycled metal, a cost-cutting measure that also means each piece is unique.

Tastes have changed quickly since he went into business, he said.

"Over the past 10 years, people used to like (characters from) Aliens and Predator, but now they like the Transformers."

Up Next: AG Prasetyo Responds To Hary Tanoe's Lawsuit Against Him