The film, which was directed by 23-year old Wregas Bhandtedja and completed within just two days, won the Leica Cine Discovery Prize.

Brilio.net - The 69th annual Cannes Film Festival was recently held on May 11-22 in Cannes, France. It's the most coveted film festival in the world, that sees entries from all over the world from the most talented directors and videographers. And this year, Indonesia made headlines for one of its short film submissions, "Prenjak".The 12-minute film, which was produced in the city of Yogyakarta, revolves around the life of a widow by the name of Diah. In desperate need of money, she decides to earn by selling a matchstick to a man for Rp. 10,000. In return, he can light up the matchstick to take a look at her body in the dark. The plot is based on Yogyakarta’s cultural practice in the 1980s, where it was common to witness girls push the limits in order to make ends meet. 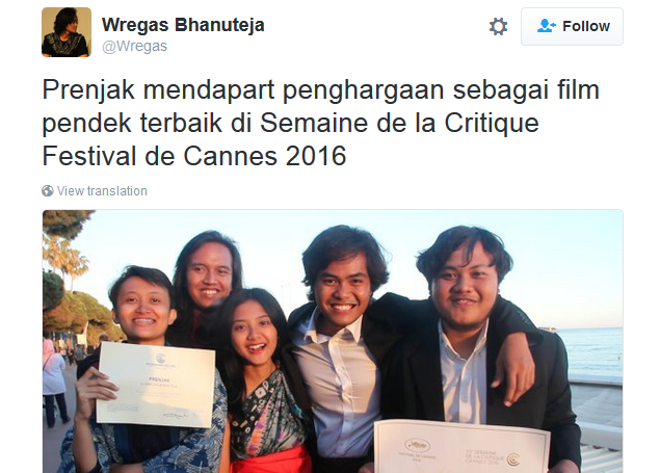 All smiles from the crew. (Source: Twitter/@Wregas)

May this accomplishment inspire the people of Indonesia who have the passion for producing creative films. With the vast size and growth potential in the movie industry today, the future is very bright indeed!

Up Next: Indonesia avoids tsunami after large earthquake in Sumatra