Update: Three Killed in Series of Blasts Across Thailand

The nation has been rocked by multiple bomb blasts across the country over two days.

Brilio.net - A series of bombings has hit Thailand just a day after its military-backed government announced potential threats to the nation after cementing its new constitutional power with a popular vote, killing at least three and injuring 27.

On Thursday, a bomb exploded near a market in the southern Trang Province, leaving one dead and six injured. As the day progressed, another two blasts hit the Hua Hin resort town in Prachuat Khiri Khan Province, killing a woman and wounding 21, including nine tourists.

The carnage continued on Friday. Just minutes after the national anthem to commemorate the Queen’s birthday had concluded at the coastal palace of Hua Hin, the town was hit by another two bomb blasts.

Three other destinations were also hit: Surat Thani, Phang Nga and the Patong beach in Phuket were also targeted on the day. Altogether, two people had died and six were left injured. 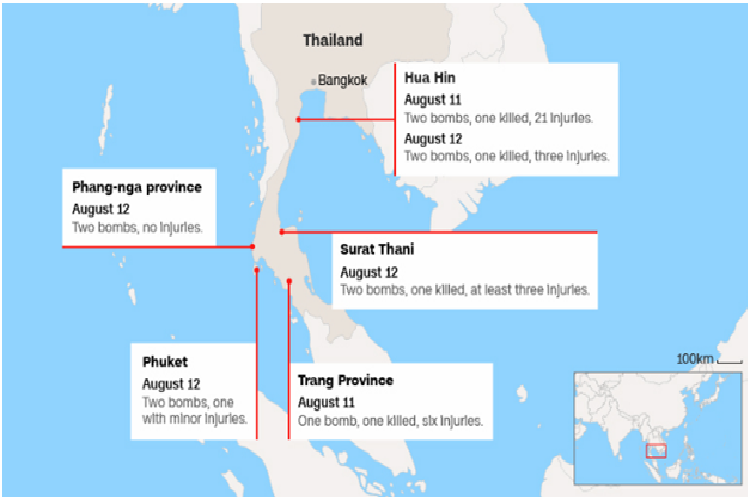 Locations of the bomb blasts
© 2016 brilio.net/edition.cnn.com

Police say the bombs were hidden in pot plants outside beer bars and detonated by mobile telephone at 30-minute intervals.

Authorities were quick to dismiss Islamic terrorists as the culprits.

In his statement, he revealed that “this is different from the terrorism that has taken place in many countries. This is local sabotage.”

Almost exactly a year ago on August 17, a bomb planted by a member of the Turkish nationalist group Grey Wolves killed 20 people and injured 125 at the Erawan Shrine in central Bangkok.

Zachary Abuza, a professor at the Thai National War College and a researcher on politics and security in Southeast Asia, believes that the masterminds behind the attacks are those opposed to the military government that took power in 2014.

The bombings had taken place just four days after Thai citizens approved of a consitutional change tightening military. Opponents of the military, however, were restricted from campaigning against the decision.

Abuza said “the restrictions on campaigning ahead of the referendum must (have) convinced some that only extralegal means can be effective.”

He further added that, “it’s been years since they have been able to pull off coordinated attacks across multiple cities and provinces, and when they have, it’s always been confined to the deep south.”

Up Next: Huge Pokémon GO tournament this Sunday in Jakarta!