Everything you need to know about the 10% brain power myth

Most of us have been convinced that we only use or have access to only 10 percent of our brain’s ability.

Brilio.net - How often have we heard a line stated that “humans are actually using the only percent of their brains? Just imagine what we could accomplish with using the remaining 90 percent of our brains!"

Chances of hearing similar statements are high because most of us have been convinced that we only use or have access to only 10 percent of our brain’s ability. Following this statement is often the speculation about the extent of human abilities if only we could utilize our brain's full capacity.

But have you ever really imagined it? It’s only 10 percent! Considering all complexities our brain have handles every single day, from breathing to thinking to overcoming pains and more, it sounds impossible, right?

Fortunately, as absurd as it may sound, the 10 percent claim is actually a 100 percent myth. We use all of our brains. Nothing is wasted. The only situation where there are unused regions of the brain is those in which brain damage or disease has destroyed certain regions.

What had this myth emerging in the first place? According to researchers, this popular urban legend has existed since at least the early 1900s. It may have been influenced by people misunderstanding or misinterpreting neurological research. The 10 percent myth is suggested to have emerged after the writings of psychologist and philosopher William James.

In his 1908’s The Energies of Men, he wrote, “We are making use of only a small part of our possible mental and physical resources.”

Like other urban legends, the myth has been perpetuated from mouth to mouth, and movies started to depict characters with remarkable finesses when the supposedly unused 90 percents of their brains are “unlocked.”

Parents, teachers, motivational speakers and other well-intentioned people are citing the 10 percent myth to demonstrate that people should strive to live up to their full potential. Unfortunately, there’s been misuse of the not so well intentioned manipulators the myth to sell products and services that they claim will somehow “unlock” brain’s hidden abilities. 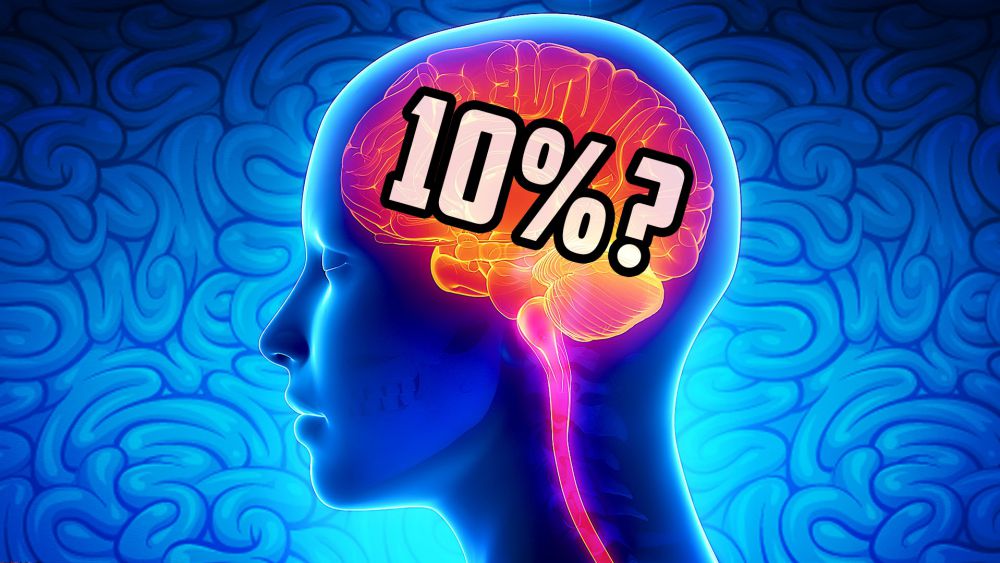 Why is the 10 percent myth false? This is what neuroscientists said:

Brain imaging technology reveals that almost all parts of all brain lobes are active during even the most routine human activities, such as talking, walking and listening to music.

If humans are only using the 10 percent part of their brains, it probably would be impossible for people who suffer from brain damage due to accident or stroke to notice any real effects. In reality, there isn't a single area of the brain that can be damaged without resulting in some sort of consequence.

We wouldn’t have evolved such large brains if we were only using a small part of them. Just like animals with small brains, that’s because they only need small portion of brain. Nothing in nature is wasted.

The brain uses approximately 20 percent of energy of our body. It would make a logical problem to have such a large portion of our energy resources utilized by such a tiny amount of the brain.

Brain mapping research has yet to find any part of the brain that does not serve as specific function. “Numerous types of brain imaging studies show that no area of the brain is completely silent or inactive,” wrote Dr. Rachel C. Vreeman and Dr. Aaron E. Carroll in a study of medical myths. “Detailed probing of the brain has failed to identify the 'non-functioning' 90 percent.”

But the myth persists...

Despite all the scientific denial, the 10 percent myth remains popular. We can find it in popular culture in many forms from advertisements to TV programs to Hollywood blockbusters such as Lucy, the 2014 movie starring Scarlett Johansson and Morgan Freeman.

But at least now you know the fact, and next time you hear someone claim that we only use 10 percent of our brains, you will know what you have to say.

Up Next: 4 Pork dishes other than suckling pig to find in Denpasar