The values of humanity should not be limited to a person's sexual orientation, religion, or race, the singer writes on Facebook.

Brilio.net - Anggun C. Sasmi's has again become the talk of Facebook town after posting two more updates addressing issues of discrimination against minorities. The updates follow previous tweets from the singer who spoke condemning acts of terrorism and the blasphemy case for which Jakarta Governor Basuki Tjahaja Purnama has been named a suspect.

On the recent posts, she mentioned that as a United Nations Goodwill Ambassador, she has always made efforts to speak for the oppressed, minorities, refugees, and the LGBT community. 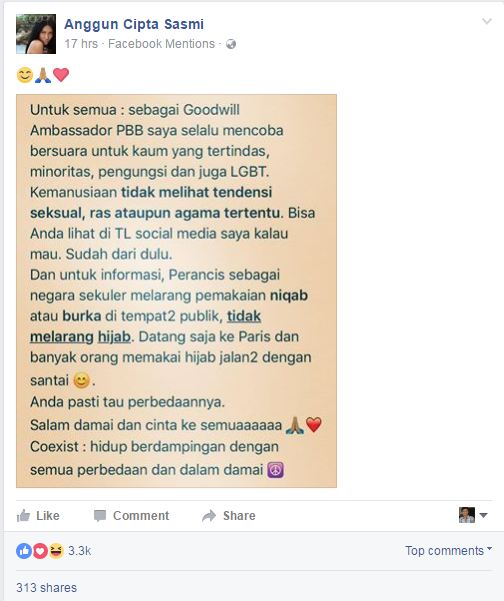 “For all: As a United Nation Goodwill Ambassador, I always try to give my voice for the oppressed, minorities, refugees, and LGBT. [The values of] humanity is not limited to a person's sexual orientation, race, or religion. Look at my social media timeline. [I have been doing this] for a long time. And, for your information, France as a secular state bans the wearing of niqab or burqa in public places, not hijab. Go to Paris, there are lots of people walking around casually with a hijab. You certainly know the difference. Peace and love for everyone. Coexist: live in peace with one another despite all differences."

While many agreed with what Anggun had to say in that post, an earlier post drew a lot of criticism. 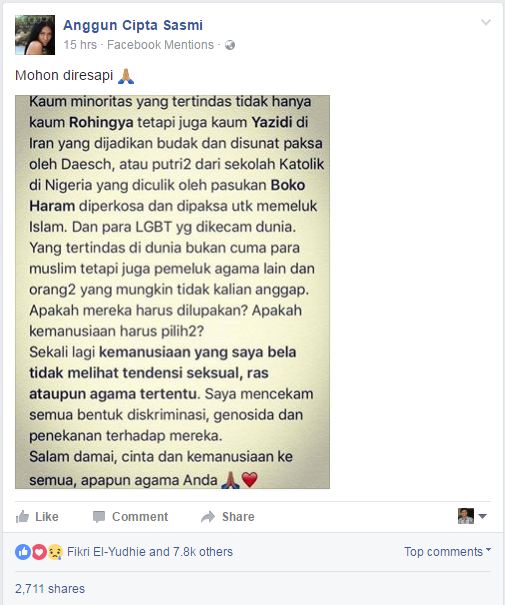 “The oppressed minorities does not only include Rohingnya but also Yazidis in Iran who have becomes slaves and are circumcized by force by the Daesh, or the girls from Catholic schools in Nigeria who have been kidnapped, raped, and forced to convert to Islam by Boko Haram. [It also includes] the LGBT community who are condemned by the world. Muslims are not the only ones opressed in the world, but also other religions and people you may not have considered. Should they be forgotten? Is humanity limited for certain groups only? Again, the  humanity that I defend does not look at a person's sexual orientation, race, or religion. I condemn all kinds of discrimination, genocide, and pressure against them. Peace, love, and humanity for all, no matter your religion.”

The post attracted a lot of comments from followers.

“Everyone are gifted to assess [things] through [their] point of views. Nothing can be blamed. Because the right one is only Allah SWT. You may agree, you may disagree.” - Ade Izhar Priamsyah

“Nice, Anggun. Let them say anything.. what matters is that [you keep on] working and being useful for others, without seeing their background. Keep your spirit up Anggun… GBU…” - Thomas Budiyanto Saputro.

“It’s difficult to explain to people whose minds are really really closed. It’s just like a sophist.” - Variando Wahyu.

“It seems like Anggun has had too many picnics abroad, putting Rohingya and LGBT in the same box. May Allah SWT forgive your statement and you receive enlightenment.” – T Setiawan.

“Just be a singer. Too much talking about humanity, but where are your actions?” – Atya Asriyanti.

“Just prove it, don’t just write about humanity… if you want just go all out like Angelina Jolie, go and meet those who suffer, not just talking on social media :) :)” – TheSartika Sartika.

Up Next: Want To Buy An Indonesian With An Escape Guarantee? Go to UAE!