Meet The Artisans Thinking Outside Of Jakarta’s Air-Conditioned Box

Here are some of the people behind Jakarta's emerging creative scene.

Gridlocked traffic jams, towering malls, exhaust fumes and inescapable smog often come to mind when one mentions Jakarta. Poor infrastructure and limited mobility make it a city that is easy to write off.

Yet beneath all that lies a group of artisans opening up Indonesia’s creative potential on a global scale, challenging the traditional role of air-conditioned malls as the hub of all social activity. By reviving community spaces and showcasing local talent on an international stage, a new generation are defying the norms that come with living in Jakarta. Many artisans grew up abroad and have returned to explore the potential of Indonesia’s raw materials and skills. The individual profiles below are only a snippet of the people and creative energy emerging in Jakarta. Meet Agus, Talita, Helianti and Caroline. Not many people can say they’ve tasted a soto-flavored pastry cake. Talita Setyadi, owner of BEAU, wants to change this.

The musician-turned-pastry-chef-turned-manager has a fascinating story worthy of a movie. As an Indonesian raised in New Zealand, Setyadi often visited her Grandmother’s bakery in Yogyakarta as a child. She studied music at university, was part of a three-piece folk trio and sold homemade macarons at her gigs. After graduating, she trained as a pastry chef in France. Ironically, “I found out, during my internship there, that I wasn’t actually a good working pastry chef. I would get bored doing the same thing,” she says. New York was next, where she studied restaurant management and bread baking.

In 2013 she returned to Indonesia and opened BEAU. “What I found was, oh my gosh, this is totally the best country in the world to do pastry. Because you can do something new,” she says. “Coming back, I saw a plethora of food ingredients that I was not able to play with in France. Like coconut sugar. You can hit five birds with one stone.”

However, Talita believes the remnants of a colonial mindset remain entrenched in Indonesia’s society. “Here it’s about survival. So, we just copy what works. Which is cool but I think that Indonesia is on the threshold, we’re developing and we need businesses like this to get people to wake up. I wanted to be that for Indonesia,” she says. “I want to empower people. From the beginning I wanted to be a pioneer, a trailblazer. The young kids in Indonesia, they need someone to look up to.”

For Talita, pastry is a medium for art expression, just like music. Opening a business in South Jakarta meant she could finally do something that had never been done before. “I could make an Indonesian brand that eventually can be brought overseas and enjoyed globally,” she says. A growing community of artisans, like Talita, is an evidence that there is more to Jakarta than just its face value. However, “the city’s untapped potential can only be reached by an understanding and awareness of the creative process," according to her. 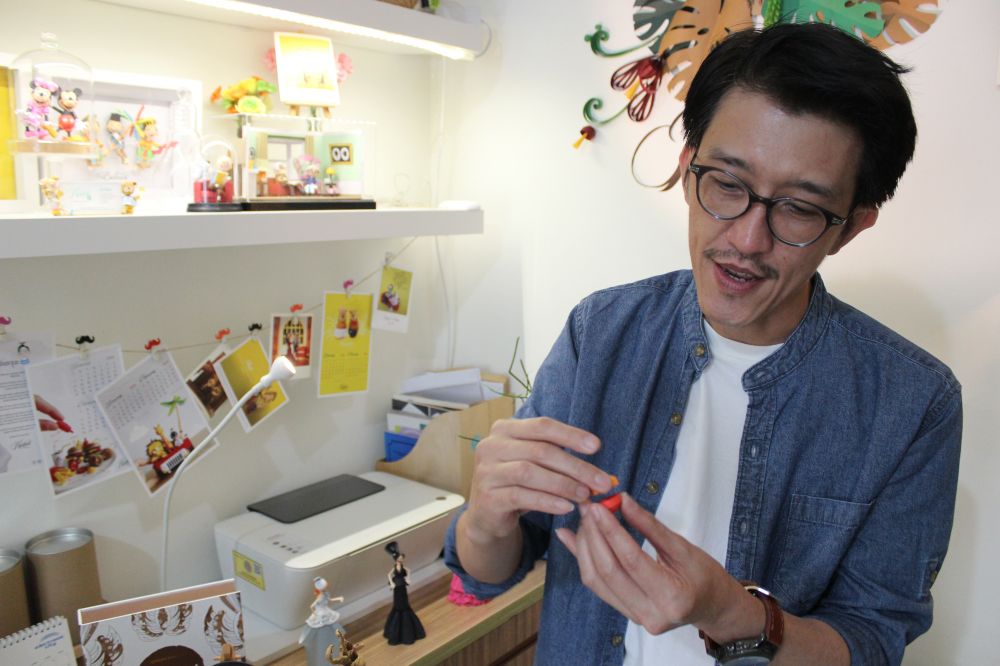 This man is determined to bring back paper quilling, in style.

Agus Winarto lives in West Jakarta in an apartment that also doubles as his studio. Pieces of paper are strewn across his workbench and figures hang from the ceiling. “What I like most about paper quilling is that you can always create. Nothing is ever ruined, I just recycle it again,” he says.

Paper quilling was always a hobby for Agus, who studied graphic design in Jakarta. He says it was a book about paper art that sparked his interest in the craft because at that time, “you couldn’t just look at Instagram or Facebook for paper quilling photos”. In 2014, he made his hobby a reality by starting Kertase. The name Kertase reflects a need to understand and love your own culture. Starting off simple and gradually working into more complex designs, many of Agus' creations are based on the wealth of culture available at his fingertips. “My creations depend on and reflect my mood. If I’m happy, I make flowers and bright colored figurines,” he says.

Each paper design is customised especially for the customer based on the colors they like, their favourite foods, hobbies and more. Agus has previously held workshops in Kota Tua and hopes his business will continue to grow. This woman is sustaining the livelihood of 52,000 indigenous farmers across Indonesia.

Helianti Hilman is the CEO of Javara Indigenous Indonesia, a community-based organic food company. Starting with just 8 farmers and products in 2006, the company has now grown to over 52,000 farmers and supplies more than 750 products to countries all over the world. But to Helianti, Javara is much more than a company. It’s a way of life.

“Basically what we are carrying is an indigenous food system. For us it’s not just about selling a product but conveying the story behind it. The farmers decide what season to start growing based on star signs and ancient techniques. These are skills we want to nurture and keep alive,” she says.

In 2007, Helianti visited her network of farmers on what she calls a three-month roadshow. During this time, “I moved from one place to another and that’s when I started to learn about the beauty of the ancient wisdom of the Indonesian food system".

With all of their assets remaining at a local level, Helianti’s business model focuses on nurturing the growth of local entrepreneurs. Javara is investing in youth ‘farmpreneurs’ and this year launched a ‘school of artisans’ that helps young farmers, foragers and fishermen to transform themselves from conventional farmers into farm entrepreneurs. To compensate for a rapidly decreasing number of Indonesian farmers, the company is aiming to create 25 artisan schools across Indonesia in the next five years.

It takes a strong woman to stand up to big companies and dedicate their life to representing the minority. Passionate is only one way to describe Helianti Hilman. Her motto? “Do not settle for less.” 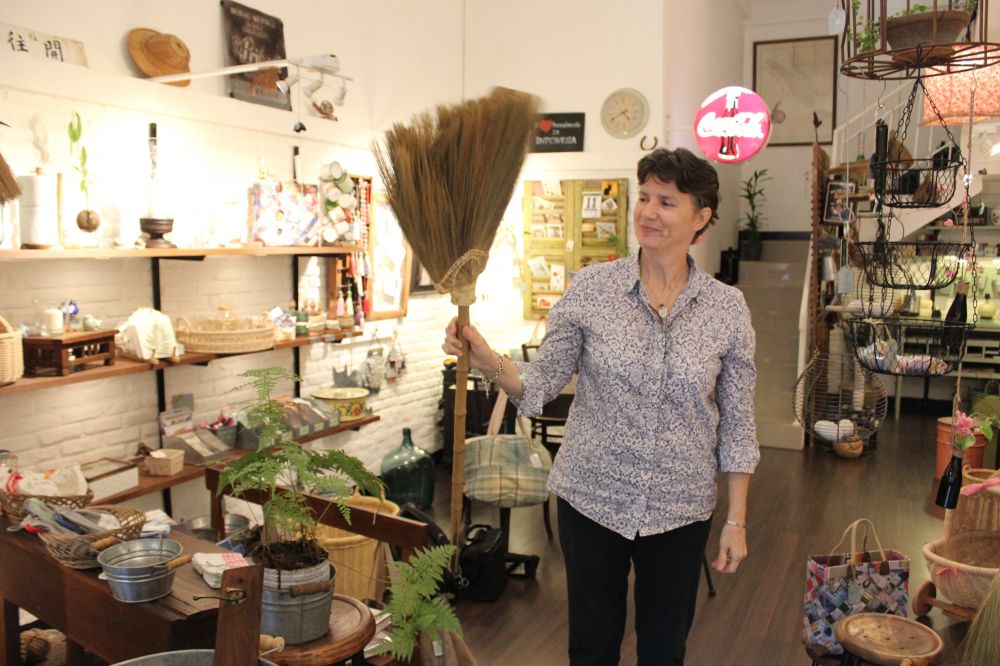 The most important thing for Caroline Tobing is that people understand the story behind each of the handcrafted items she sells.

“The number one reason why I don’t let other people sell these products is because behind every single product there is a person. And I want you to know about this person because I don’t make a living out of this, it is purely a non-profit foundation.”

Born in France, raised in Indonesia, schooled in Singapore and educated in the US, Caroline’s tale is one that eventually leads back to Jakarta and Paisley Things. What begun as a mild fascination surrounding a hand-made broom, developed into a full-blown appreciation and cultivation of Indonesian ‘things’. As a non-profit program under the Darius Tobing Foundation, Paisley Things supports local artisans across Java by working with them in their own environment. All the money from the sale of the items in her shop goes back into the foundation to help more people, develop more programs and support more artisans in their villages.

“Each of these artisans have skills which are heritage skills. Skills that are hard to duplicate because they learn it from somebody in their house when they were a child. These skills, if you don’t keep them working, will die when they become a driver or a maid and will not be passed on,” Caroline says.

Up Next: Schools In Yogyakarta Refuse To Receive Measles Immunization Program