Apparently not only university graduates and urbanites can earn millions of cash in addition to their income. The villagers of Indonesia’s densest island, Java, have taught themselves to become graphic designers. They mostly live humble lives in simple houses and work as paid farmers, carpenters, house builders or factory labors. Filmmakers Amron Muhzawawi and Muhamad Aprianto highlighted the latest trending profession in Kaliabu village around Magelang by filming the documentary Desainer Kampung, which means “village designers”.

In 2012, Fahmi Baehaqi was one of the only two graphic designers in the area. In the next two years he had influenced his neighbors to follow his path and the community members have expanded to include 250 graphic artists in 2014. They got their projects online and had received tasks from all over the world. One of them had even won an online graphic design contest with the prize of USD 450. The winner, Khoirul Muhibin or also nicknamed Kang Ibin, had never even touched computer all his life. But within a year he could won a contest and became a motivation for his neighbors. “If he could do it, we are also able to do it,” they would encourage themselves. 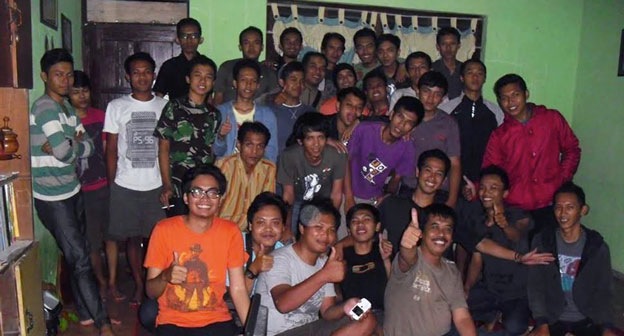 Of course, being only high school or junior high school graduates created certain obstacles for them. Even their language was a barrier as they use their native Javanese and barely the national Indonesian. Furthermore, English is an alien language to them. Thankfully they found Google Translate that bridges one of their main problems. Another problem is electricity and Internet connection. In 2012, said Fahmi, the signal was very bad and the electricity would often cut out. Living in the village limited them to facilities more easily accessible in the cities.

Another problem they encountered was art and design. Although they are all now work as designers, they all learned by doing without understanding the basic theories, rules, or concepts of art and design. They are problem solvers anyway, and invited local artist Deddy Paw to give insights about art and design to the new designers, as documented in the film. Not only was the bank suspicious, but his own parents even doubted their son’s rapid increase in income while they didn’t see him really doing anything outside the house. They didn’t understand anything about computers and even forbid Fahmi to do whatever he was doing because he always went out of the house at night to learn how to use the computer. He didn’t go home until morning because although he owns computer, the houses didn’t have electricity back then and they had to work at a friend’s house. But being persistent, Fahmi isn’t afraid if people second-guessing his profession. “What is more important is the result of the work, not the background of the person behind the work,” he stated firmly.

This new profession surely has given many positive effects to the village besides increasing each of the designer’s confidence and dignity in their society. Youth are no longer found drinking and hanging out irresponsibly, migrants are going home to learn design, and even criminality level have decreased. At the time being, even when there is no security on patrol, they don’t get robbed anymore as they have to work late for their profession, which doesn’t give a chance for burglars to break in.

With the increase of designers in the area, the village is now lacking what it used to have in abundance: construction worker. It is only natural that people would prefer to learn how to use the computer than work as labourers, both because of the work type and the money.

The documentary was in the running for finalist at the Metro TV’s annual documentary contest in 2014. As a response to the film, an open forum of Indonesian graphic designer enthusiasts, Forum Desain Grafis Indonesia or FDGI, created a program to help these village designers. The supporters are the FDGI from Jakarta, Semarang, Bandung and Yogyakarta. They provide workshops and seminars in Salaman village to improve their knowledge of designing and skills to make a sustainable living among themselves.

Up Next: Indonesia to castrate sex offenders