From The Field: Anti-Trump Protest In Jakarta

A group of protesters gathered for Dump Trump rally in front of United States Embassy in Jakarta on Feb. 4, 2017.

Though the crowd size is small, the anger towards the new US President is evident. 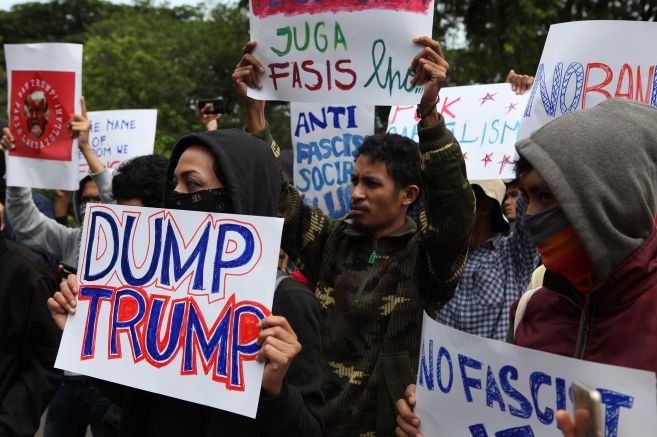 A group of protesters gathered for Dump Trump rally in front of United States Embassy in Jakarta on Feb. 4, 2017.

A group of protesters held a rally at United States Embassy complex in Jakarta on Feb. 4 morning.

Calling the action as “Dump Trump Rally”, around 25 protesters brought posters and expressed their disagreement to the new president’s executive order that bans entry of visitors from seven Muslim-majority countries and stops admission of Syrian refugees for 120 days.

Despite being a country with the largest Muslim population, Indonesia is not one of the seven banned nations. The Indonesian government has also expressed its indifference to the executive order, saying that the country is not affected by the policy, thus Indonesian people should just keep quiet about it.

Here are some pictures of last weekend's protest in Jakarta taken by our photographer, Jefri Aries.