This is what a hijab-wearing alumni from the university had to say.

Brilio.net - The Yogyakarta Muslim People Forum (FUI) has called on the Duta Wacana Christian University (UKDW) to remove a billboard ad promoting the school, which shows a hijab-wearing student as one of its models. The organization claims it is not appropriate that a Muslim student was featured in a Christian-majority university. 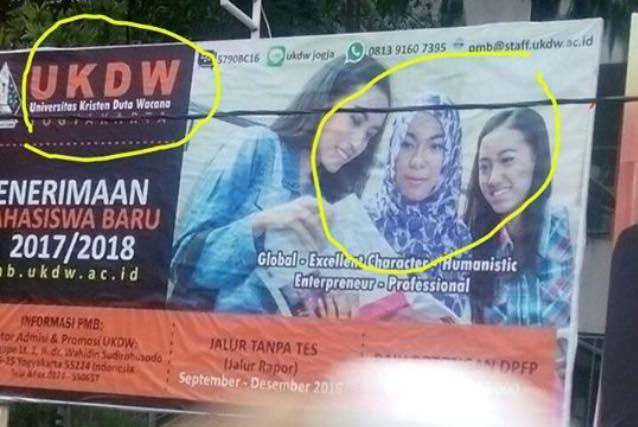 The university has agreed to comply to requests to take the ad down, but the protest against the ad has sparked criticism against the act of religious intolerance portrayed by the organization.

Siti Rofiah, a Muslim who is also a UKDW alumni gave spoke out on her Facebook page:

“I am a woman with a hijab, [also]a UKDW alumni, responding to the Coercion to Drop Billboard in UKDW.

After acts of religious intolerance in Bandung, it seems there is a wave of religious intolerance spreading to other areas, one of them Yogyakarta. Yesterday, I received a news from my friend that FUI Yogyakarta insisted UKDW to drop a billboard showing a picture of a student in hijab. According to FUI, universities with majority Christian students do not deserve to have banners with a woman in hijab [as their model].

In my opinion, FUI’s insistence is a really unfounded action. On what basis do they think that Christian universities are not allowed to install a billboard with a picture of a woman in hijab? One of the functions of a university is as a research institution where academic freedom is highly valued. Academic freedom is a person or a researcher’s freedom to study problems and express his or her conclusions without interference from political authorities or religious authorities and/or institution that employs him or her unless the method he or she uses is inadequate or contrary to professional ethics or contrary to the authorized institution in his or her scientific field. Academic freedom is the freedom of the faculty’s members to teach with their own thoughts and promote speculations and conclusions made independently or free from what the institution desires.

In academic freedom, students are free to study, take, save data or viewpoints given during lectures and judge the materials or point of view. Students get the same treatment during learning process and should not be forced at class or academic environment to accept opinion or ideas about philosophy, politics, or other issues. 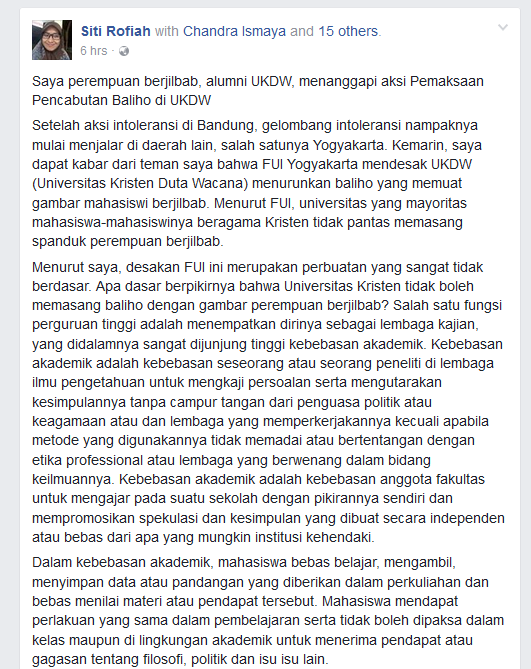 During their activities, if one cannot find anything that violates the academic freedom or law, then no one can force their wills towards the rules in the university. As for example, if there is a Muslim student studies in a Christian university, and he is forced to follow the lecturer’s opinion, or forced to follow the lecturer’s belief, then this is what we call as violating the academic freedom, and this is actionable.

Once more, the coercion to drop the UKDW’s billboard [showing] a woman in hijab is a really unfounded action. I am talking as a part of UKDW’s academician and alumna. I, whose most my life time I spent in Islamic boarding school is an alumna of UKDW. As an alumna, I really understand the learning environment in UKDW. I think there is no wrong if they install billboard with a picture of a woman in hijab as they truly accept students from different religions, with whatever accessories they might wear, including a student in hijab like me.  During the learning process, there is nothing deviates from academic freedom. Even after 5 years I became their student, I think that this university is very Islamic. Why? The values in Islam that have been taught to me including manners and morals, I found them there.  I felt I was treated very well, very “humanizing human”.  As a minority [in the campus], I did not feel like I was treated differently. I could pray easily as [the worship place] was provided. I even remember clearly how a cleaning service man always help to find my slippers when I was going to wudhu. That is just a small example of “Islamic” I found in the Christian university UKDW. There are still a lot more than that. It reminds me of what Gus Dur said, “Tolerance is not about comprehension, but experience.” And I experienced it. 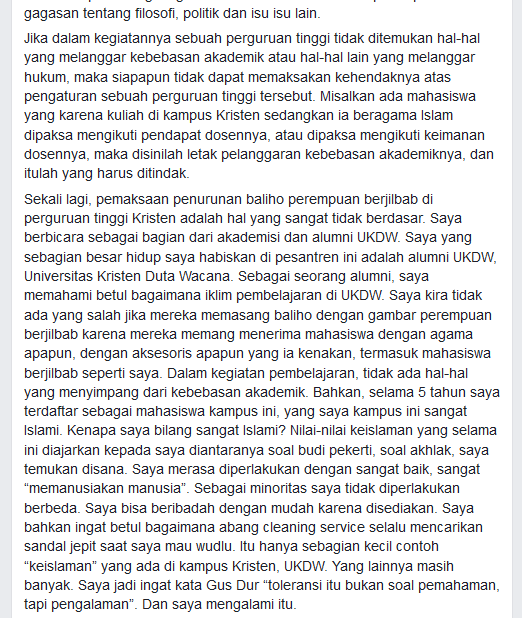 In this case, FUI probably imagine universities as a propaganda institution, not knowledge institution. FUI and whoever has the same opinion are supposed to understand that in universities, everything (I mean the object of study) are put as a knowledge system, not a belief system. That’s including universities teaching theologies.

For this one, I think government should be more assertive. They should not be confused with which one they have to protect and which one they have to take a legal action to. It’s enough for us to learn from the intolerance actions that have been done for these tens of years which become more prevalent these days. 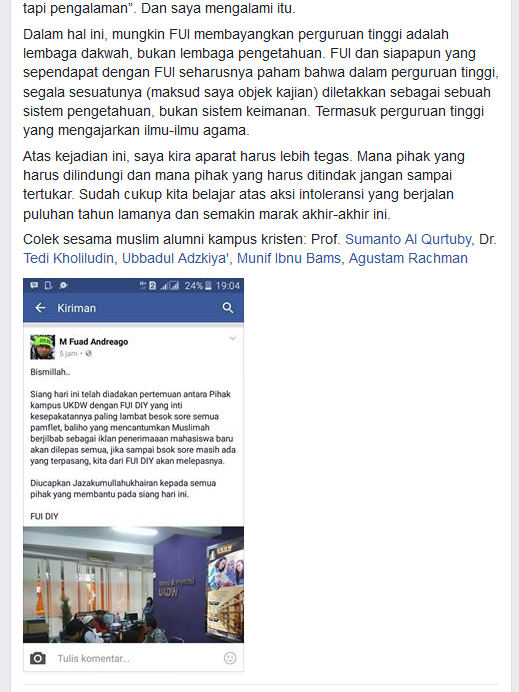 “I have read this post and millions of people will share this inspiring writing. I just don’t believe that they are religious people, even I found people who admit that they have no religion but they don’t act like that. Then, what are they [really are]?” one of the comments written by Maz Firdaus.