Students are already back in SMA 8 Jakarta even though flood hit the area yesterday. (Brilio/Jefri Aries)

SMA Negeri 8, or Public High School 8, is famous for its good academics and its resilience in the face of regular flooding.

The school in Bukit Duri, South Jakarta, suffers everything from annual 1-meter floods, to the the massive big ones that come in a 5 year cycle —though the latter has turned to 3 or 4 year cycle in current years.

This year is no different. The school was inundated on Wednesday evening and the water had reached 70 centimeters by the next day. 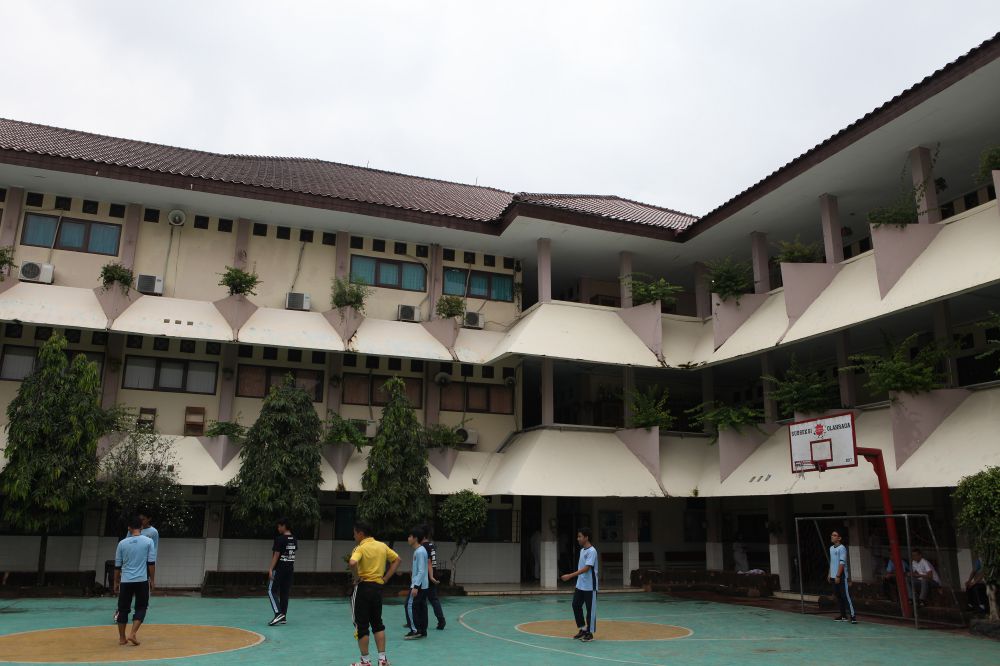 Students are already back in SMA 8 Jakarta even though flood hit the area yesterday. (Brilio/Jefri Aries)

But the school says its reputation has given birth to exaggeration.

“Media reported that the flood reached 1.5 meters,” said headmaster Agusman Anwar.  “Just check the stain on the wall, does it look like 1.5 meters?”

Lessons, though, continue as if nothing happened. Today, staff are still busy cleaning carpets and desks, but the school in general is already clean and students are studying in their classrooms.

Agusman says this year is better than previous ones, because the water retreated fairly quickly. But then again, this is his first experience with flooding at SMA 8.

Desi Purnama has been teaching at SMA 8 since 2000 and has witness countless floods. 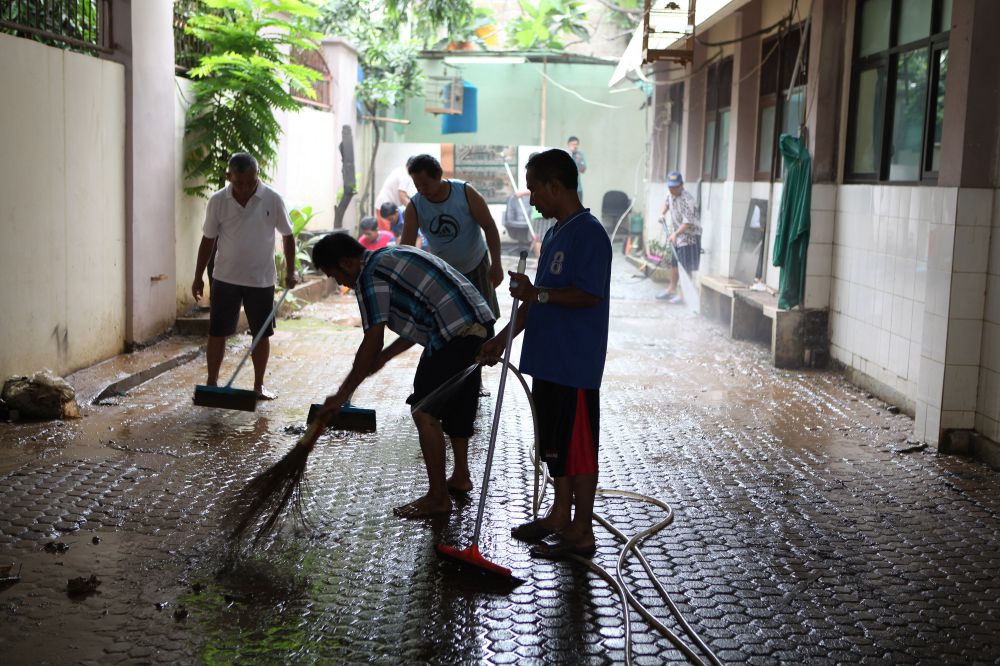 Staff of SMA 8 Jakarta are still cleaning parts of the school on Feb. 17, 2017. (Brilio/Jefri Aries)

“We’ve become accustomed to the flood and we know how to handle it fast. We’ll survive. We always survive.”

Students don’t seem to be bothered by the floods either. They looked happy when we visited the school this morning.

Kevin, an 11th-grader, says although they have to deal with the muddy aftermath, he and his friends are not too disturbed by the floods.

“We even get days off!” he said cheerfully, before rejoining a football game.

Plans to relocate the school have been mooted since 2007, when a major flood hit Bukit Duri. The water was "only ankle high…. on the second floor" — a joke that long-time teachers and local residents know by heart.

But up to now, there is no solid plan on where or when a relocation will happen.

Headmaster Agusman says it's up to the government to relocate the school, not him.

Samlawi, the head of South Jakarta Education Agency, said it was not within his authority either. “It’s the provincial education agency’s decision to do so.”

But no one is sure whether relocation is the best answer to SMA 8’s problems.

“We like it here, it’s easy to access. We’ve shared so much memories in this buildings. The alumni won’t like it too. We only need better river management,” Desi says.

Last year, Jakarta Governor Basuki Thajaja Purnama promised there would be no more flood in the school and all of Bukit Duri. The promise, apparently, failed to come through.

The governor claims the Ciliwung river revitalization program has not finished, though the government evicted hundreds of homes from the river bank in Bukit Duri last year, so the water influx from Bogor is still going to inundate the area.

Though improvements have been felt by those living and working in Bukit Duri, the 2017 floods came on the day of the election, and have become a major sticking point with the incumbent governor.

This week, according to Jakarta Disaster Mitigation Agency, a total of 7,788 people or 3,393 families living along the Ciliwung river were affected by the flood, including in Bukit Duri. 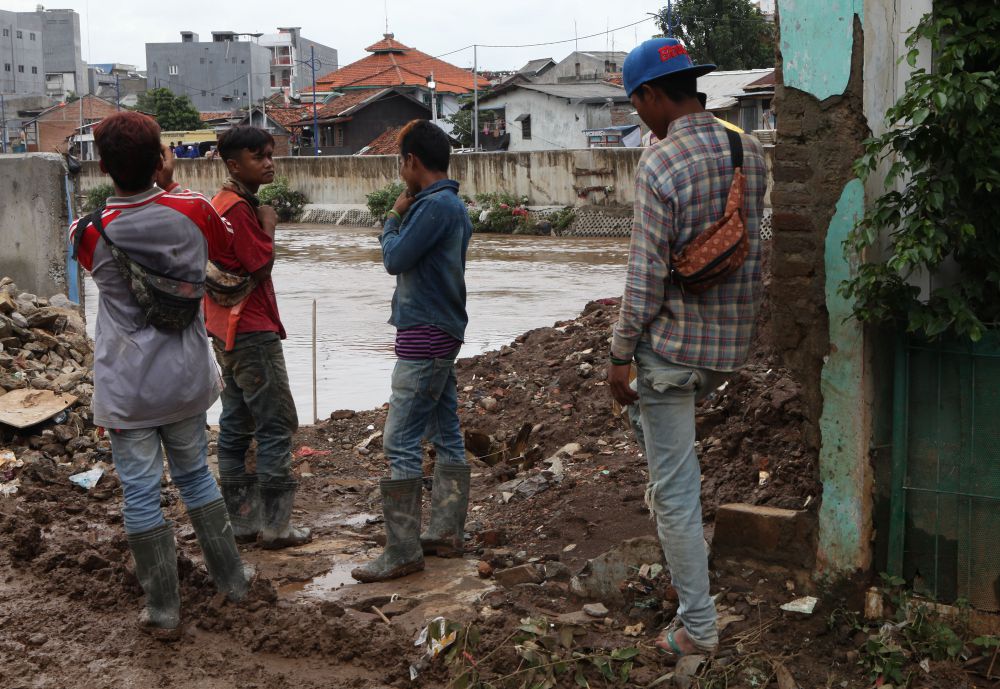 Gubernatorial runoff hopeful Anies Baswedan weighed in on the issue.

“I thought there’s no more flood,” Anies told reporters. “Sometimes (the way he says it) it seems that all problems are solved, when in fact there is still a lot to handle.”

Anies says the government only focuses on how to channel water to the sea, while the problem is in the city’s drainage system.

“In the end, we need vertical drainage as well. It’s not enough to channel the water. We still need to put water into the earth because Jakarta needs water,” he said.

Deputy Speaker of the House of Representatives Fadli Zon also offered his comment.

“Flood in Jakarta keeps happening even though Basuki promised that it won’t happen again. (He) must not be arrogant,” he tweeted yesterday.

People are also using pictures of SMA 8 flood to claim Ahok’s administration is lying about the floods. Pictures spread in social media show the school during its 2013 floods where water levels reached over 2 meters.

Others used pictures of this year’s flood to express their resentment towards Ahok.

But the incumbents are not budging.

“Infiltration wells have been used since a long time ago. We’ve dredged the rivers,” Deputy Governor Djarot Saiful said today. “It’s been done for so long, but it needs process and time. Now (the flood) is so much better and we always check whether anyone needed to evacuate. There’s none this time.”

“I cant comment on that. But it’s impossible to do anything without river normalizaton,” he said. “We need time to build flats. We need three years to educate people to move to those flats.”

Up Next: New Zealand Part Of Sunken 'Lost Continent': Scientists