A Tale of Two Painters: Story Behind Indonesia's Most Famous Artwork

Brilio.net - If you happened to see the Presidential Palace exhibition on this month at the Galeri Nasional, you would have noticed one painting getting far more attention than the others.

Penangkapan Pangeran Diponegoro (The Arrest of Prince Diponegoro) by Raden Saleh is not just a masterpiece that's barely ever been seen by the public. It is an iconic painting by an iconic painter with almost mythical status as the greatest-ever Indonesian artist and (largely due to the painting) a legacy inextricably tied to Indonesia's struggle for independence. Then there is the actual painting, of legendary independence figure Prince Diponegoro getting arrested by Dutch colonial authorities after they invited him for peace talks.

The importance of Penangkapan Pangeran Diponegoro to the culture and nationhood of Indonesia is hard to overstate.

Just at first glance, the painting churns up emotions tied to the colonial era of the Dutch East Indies. The tension in the painting burns – and it is meant to. It shows the protagonists of the anti-colonial Java War - the Dutch general Hendrik Merkus De Kock and the Indonesian Prince Diponegoro.

Raden's work was in reaction to that of Dutch artist Nicolaas Pieneman. Pieneman painted The Submission of Prince Dipo Negoro to General De Kock in 1835. That work was commissioned by the De Kock family.

On seeing it, Raden decided to paint a different version of events. His was finished in 1857. Here are both below. 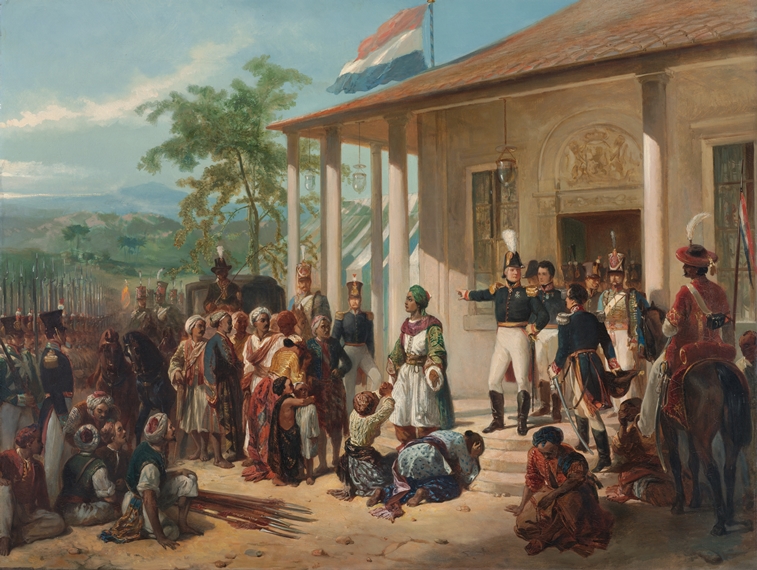 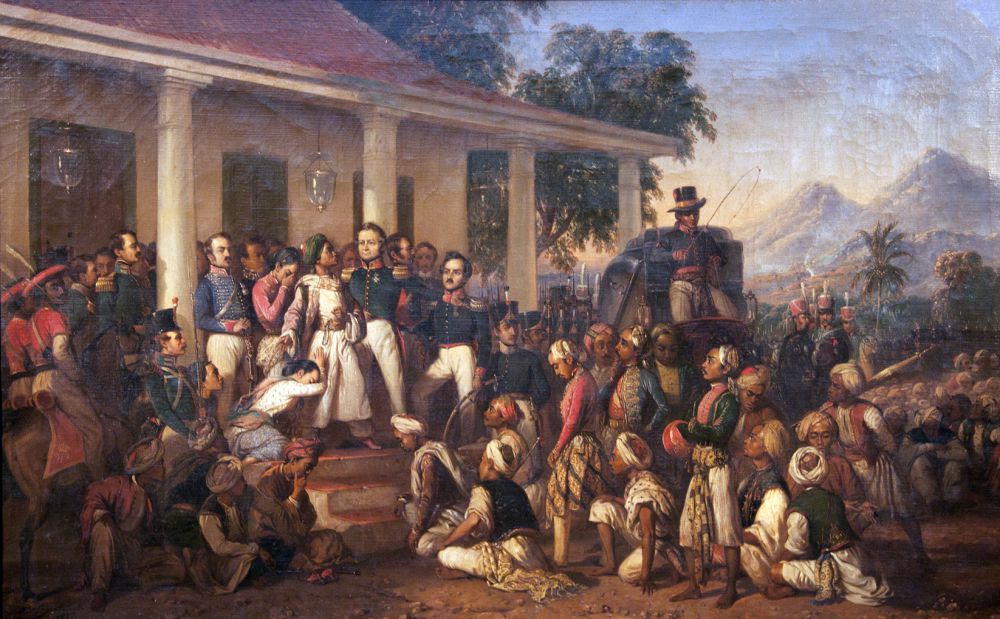 Prince Diponegoro never surrendered. In Raden Saleh’s painting (and as the title suggests), we can see that he was set up. During the long Java War in 1830, the Dutch asked Diponegoro to come and talk about an opportunity to end the war. But when Diponegoro arrived in Magelang, Central Java, the Dutch arrested him. Raden's view on the event is clear even from the basic composition, which is set in opposition to Pieneman's, who had his main subjects on the right. Raden's are on the left.

In Raden Saleh’s painting, Diponegoro’s face looks tense as he is overwhelmed with anger by the betrayal. But in Pieneman’s painting, the prince’s face is plaintive.

The Dutch officers' heads are slightly bigger. This show Raden’s feelings towards the Dutch and his anger at what they did to Diponegoro. Standing at Diponegoro’s side is his captor, De Kock.

There are at least four Raden Saleh’s faces in the painting. If you have a keen pair of eyes, you must have noticed four men with the same face and fashion: they have moustaches and wear blangkon (Javanese headdress for men). According to Palace Artworks curator Mikke Susanto, those faces are those of the painter himself, suggesting Raden was Diponegoro’s supporter.

The painted situation is very accurate. Raden Saleh is known for his attention to detail. He even painted a gemstone ring in one of Diponegoro’s supporter’s finger and paid great attention to the intricate patterns of the Indonesian and Dutch clothes. He even painted Mount Merapi and Merbabu in the background.

On the other hand, Pieneman’s painting showing that the painter has never been to the Dutch East Indies. He depicts Indonesians with Arabic faces, which have very different characteristics to Javanese people.

Soon after he finished the painting, Raden Saleh gave it to King William III of the Netherlands.