Questions and explanations behind the Garuda's apparent existence

Questions arise over the existence of Garuda, an iconic symbol of Indonesia.

Brilio.net - All Indonesians recognize the Garuda as their national symbol. Its giant wings and fierce expression projects a sense of strength. The image also raises the question of whether the Garuda existed; and if so, what did it look like?

As quoted by brilio.net/en from various sources, The Garuda is a mythical bird in the Hindu epic Mahabharata. As the mount for the god Vishnu’s expeditions around the world, the creature is described as strong, loyal, and brave.

In Balinese tradition, the Garuda is believed to be a great king of birds. Like its Hindu antecedent, it is said to have an eagle’s head, beak, wings, and claws. However, it has a human’s body and arms.

The Garuda Pancasila as we know it today was created by six Indonesian national figures: Ki Hajar Dewantara, Muh Yamin, Sultan Hamid II of Pontianak, Raden Mas Ngabehi Poerbatjaraka, Moh Natsir, and MA Pellaupessy, as well as a foreigner, the German Dirk Rühl Jr. Originally, the Garuda’s head looked similar to the bald eagle that symbolized the United States. But Rühl, an expert in Symbolism and Semiotics, gave the Garuda the distinctive topknot on its head that we know today.

The experts then tried to find a bird that can represent the Garuda’s strength and character. Of the many birds that exist in Indonesia, their choice fell on the Javan hawk-eagle (Spizaetus bartelsi). 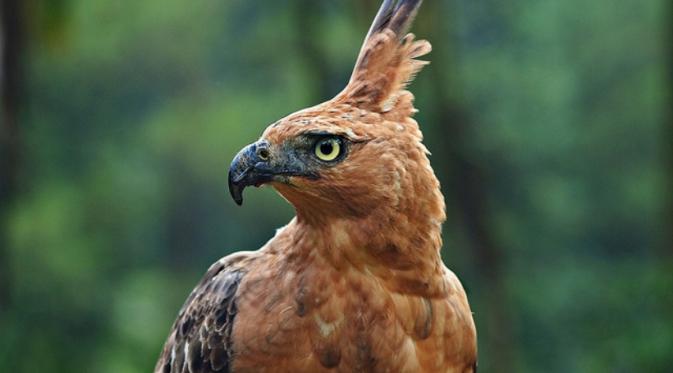 The Javan hawk-eagle. It has the same character as Garuda

The Javan hawk-eagle is a rare bird endemic to Java. The Lembaga Burung Indonesia or the Indonesian Bird Institute estimates that there are only 600 of these birds living in the wild on Java. The institute adds that the bird is endangered, as female Javan Hawk Eagles of the species only lays its eggs twice a year.

On the other hands, some people say that the mythical Garuda may have once truly existed. They cite the existence the now extinct Dan Haast’s eagle in New Zealand. Known to the Maori as Hokioi, the species was notorious for preying on moas, and was strong enough to carry a human.

Up Next: 5 one-time favorite vehicles now almost extinct in Indonesia