Rurik Jutting closed his eyes and shook his head at times when the videos were being shown in court.

Brilio.net - Jurors in the murder trial of British banker Rurik Jutting viewed harrowing iPhone footage Tuesday showing his attacks on an Indonesian woman whose decaying body was later found dead in a suitcase in his Hong Kong flat.

Jutting, 31, is standing trial for the murders of two Indonesian women, both of whom were killed in his luxury apartment two years ago.

The former securities trader for Bank of America-Merrill Lynch pleaded "not guilty" to the two murder charges Monday, on the grounds of diminished responsibility. He pleaded guilty to manslaughter, which was rejected by the prosecution.

Jurors Tuesday watched around 20 minutes of footage of Jutting attacking the first victim, Sumarti Ningsih, 23, who prosecutors said was tortured for three days after she arrived at his flat on October 25, 2014. Jutting had offered her money for sex.

Reporters in court did not view the disturbing footage, which was shown on individual screens to jurors, but were able to hear the audio.

"Do you want me to hit you? If you say yes, I hit you once. If you say no I hit you twice," Jutting was heard to say.

"If you scream I will punch you, you understand?"

Jutting repeatedly asked Ningsih if she loved him.

The only sound from Ningsih in the video was a muted squeal, according to an AFP reporter in court.

The prosecution then showed a number of clips of a topless and ranting Jutting talking to the camera after he had killed Ningsih.

The court heard Monday that he had cut her neck with a serrated knife in the shower after forcing her to lick a toilet bowl.

"About five minutes [ago] I just killed, murdered this woman," says Jutting in the iPhone footage.

The start of the footage showed a brief glimpse of Ningsih's body lying awkwardly in the shower.

"Three days of torture, rape and mentally brutalized," he says. "I've never seen anyone that scared."

He had used pliers, sex toys, and a belt in the attacks on Ningsih, the court heard Monday.

Jutting said the sense of dominance was "addictive".

"I feel a bit sad because she was a good person, but I don't really feel guilty," he said in the video footage. 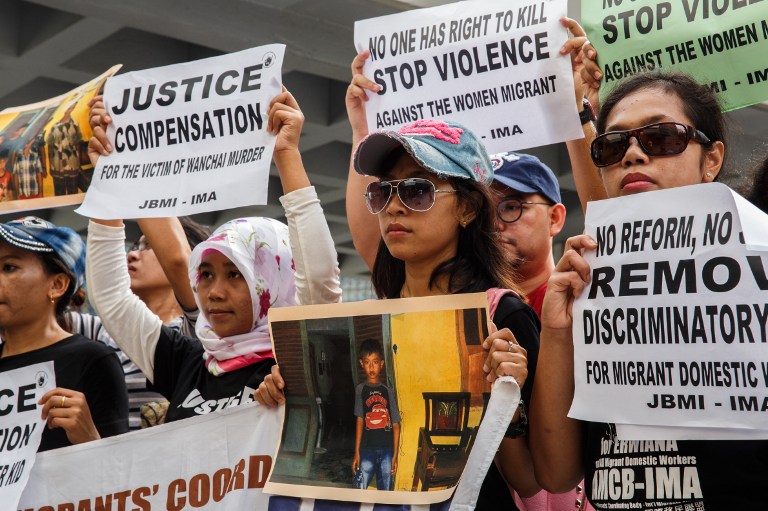 A group of protesters from Indonesian migrant worker organisations hold placards and a photo of victim family members outside the High Court at the beginning of the trial of British banker Rurik Jutting.
© Agence France-Presse/Anthony Wallace

"When I'm high on coke I have the propensity just to do bad things," Jutting said in the recording.

The Cambridge graduate closed his eyes and shook his head at times when the videos were being shown in court.

Ningsih and Seneng Mujiasih, 26, were found dead in Jutting's flat in the early hours of November 1, 2014, after he called police.

Jutting cut Mujiasih's throat on October 31 after he had met her at a bar near his home in Wan Chai and offered her money for sex, the prosecution said.

Police found her in the living room while Ningsih's body was discovered in a suitcase on Jutting's balcony.

The killings shone a spotlight on the seedy underbelly of the finance hub. Jutting's flat lay streets away from one of the city's red light districts.

Indonesian migrant organizations in Hong Kong have called for justice for the women, and compensation for their families. Mujiasih was in Hong Kong on a domestic helper's visa, while Ningsih had a visitor's visa.