Air conditioned Bajaj is ready to operate in Jakarta

Brilio.net - Jakarta has a unique public transportation named Bajaj, originated in India. It is a small three-tired vehicle where the driver sits in the front and two passengers are sat in the back. The driver is controlling the handlebar like in the scooter instead of steering wheel, and the side windows don’t have glasses to let in the fresh air breeze.

The famous vintage orange vehicles have been operating since 1975. The amount of Bajaj drivers in Jakarta are as many as 14,000: 8,000 are driving the 40-year old orange Bajaj while the other 6,000 drive the blue ones with renewal in gas fueling. The latter has become a favourite as the machine sound is less noisy.

A palm oil businessman Christoforus Richard, had the Bajaj drivers around his home at Blok M area, South Jakarta, complained about how the old machines are getting slower or broken, and how it affecting their incomes. Chris, as the man is usually called, thought of a solution to make electrical Bajaj.

“I see that electrical Bajaj is the most realistic (solution) right now. The operational cost is less and it is environmentally friendly,” the man who was born in Gorontalo 48 years ago explained about the reason he’s developing the innovation.

As he saw this as a good business potential, Chris started to gather technicians since 2013 to make a prototype. He established a company under the name of PT. Arrtu International at Cawang, Jakarta.

He didn’t expect that he could get all of the components in Jakarta, which made the path easier for him to get the necessary permits and meeting the requirements of local content (Tingkat Kandungan Dalam Negeri or TKDN), as 95% of its material uses local products. Only its dynamo is imported from China. Currently Chris is building a factory in Cirebon, West Java, to produce up to 50 units per day. He also plans to work with a local dynamo supplier, thereby sourcing all of his supplies 100% from Indonesia.

Once the assembly was done, Chris picked white and green for the body paint to give a fresh and a spirit of clean energy. Series of tests had been conducted and the result is satisfying. Even the SOE Minister Dahlan Iskan had tried the electric Bajaj. He also often lends the Bajajs to his driver neighbors for a little test drive. “The drivers said it’s smooth and the passengers are happy,” Chris reported.

With the refined product, driving experience and testimonials, Chris was finally ready to ask for the permits and had brought a group of drivers to meet Minister of Industry Saleh Husin for support. Now he has both of permits from Ministry of Transportation and Ministry of Industry. 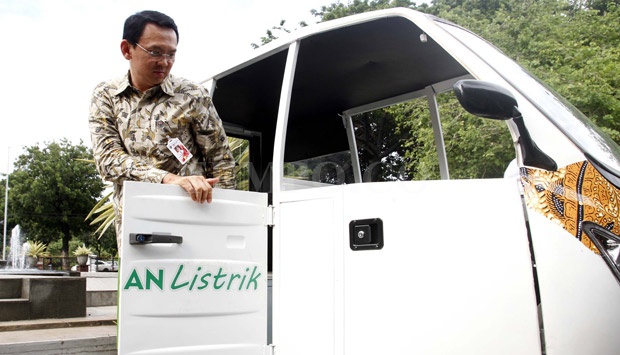 The six batteries each have capacity 200 Watt. The charging needs power of minimum 1,300 Volt Ampere. With 5 hours of charging the Bajaj can go up to 150 kilometers away, enough for a whole day city trip. He offers the renting-buying system, whereas drivers have to deposit IDR 100,000-120,000 per day in the two first years—which is cheaper than the current deposit to the orange Bajaj owner—then the Bajaj can be theirs to own. The maintenance fee will be IDR 25,000-30,000 per day, and the charging is IDR 5,000 per battery. This would allow the drivers to have income 5 times their current daily income.

Inspired by the uprising app-based public transportation, Chris is now developing an application to connect users with his Bajaj drivers. He even plans to put on air conditioner (AC) in the vehicle, as the air in Jakarta is becoming highly polluted and extremely hot now. Chris’ great innovation has given the public transportation in Jakarta new option and solution.

Up Next: 25 Pictures of celeb’s Instagram parody poses will make you laugh