The Absurd Explanation On Why ATMs Are Off Limits To Tuyul

Supernatural beings might need to up their tech training.

Brilio.net - We've recently written at length about what a tuyul is and why this bald-headed child demon is one of Indonesia's most fascinating supernatural beings.

But while a tuyul is highly skilled in sneaking around at night stealing people's money, one does wonder how ATM machines have stayed secure all these years with these creatures supposedly visibly roaming around. Could banks have cast anti-tuyul spells on their machines so as to ensure the loads of cash in them stay exactly where they need to be?

One netizen has a logical yet laughable explanation on the situation:

"Tuyul is a creature from ancient civilization, while the ATM is secured digitally using a computer. There's no way tuyuls are able to figure that out," said Julian Sulistyo, as quoted from 1cak. 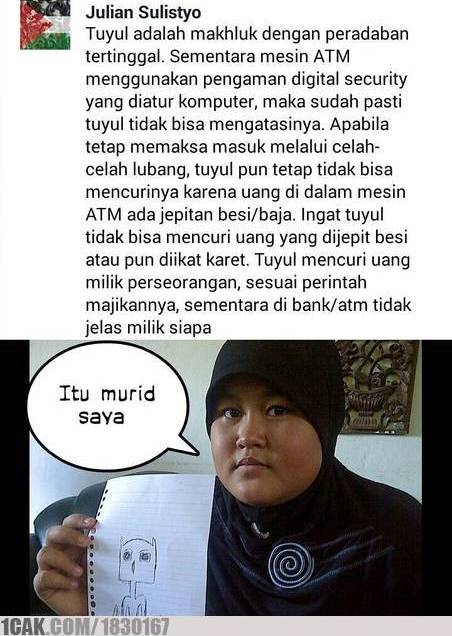 Moreover, Julian explains that even if a tuyul wanted to try and use its powers to slip into the machine, it won't be able to do so thank to the machine's iron or steel clip.

"Do note that tuyuls are not capable of stealing money that's pinned with iron or tied with a rubberband. Tuyul steals what is private property, as part of an order from its master. Meanwhile, there's no clear ownership when it comes to ATM money," he added.

O"Be a smart tuyul.. don't just steal money, go study and be a successful tuyul who can get the money from ATM," commented F Nauval Reyz.

Up Next: 10 Best Museums In Yogyakarta