These are 12 strangest house with the most bizarre architectural design ever built.

Brilio.net - Are these strange houses being perfect reflections of the owner’s personalities? It’s not our right to say, but we can still enjoy the picturesque shapes and details they designed the houses with. From around the world, these are 12 strangest house with the most bizarre architectural design ever built:

As you drive up Signal Mountain in Tennessee, beyond the thick foliage you accidentally catch a glimpse of a huge oval figure that looks so much like a UFO. Maybe you consider calling the FBI. Before you capture any pictures and spread a viral hoax about an alien abduction on Twitter, you better stop by and take a closer look! It is actually a house, and it’s inhabited by humans.

We can’t blame you, though. The house greatly resembles a spaceship, especially with the space between the large pillars that are big enough to park a couple of cars underneath. And how about a retractable door at the bottom? It appears as if entrance where the extra-terrestrial being will emerge to abduct a cow! Don’t worry it’s not going to happen. It’s a normal human house. 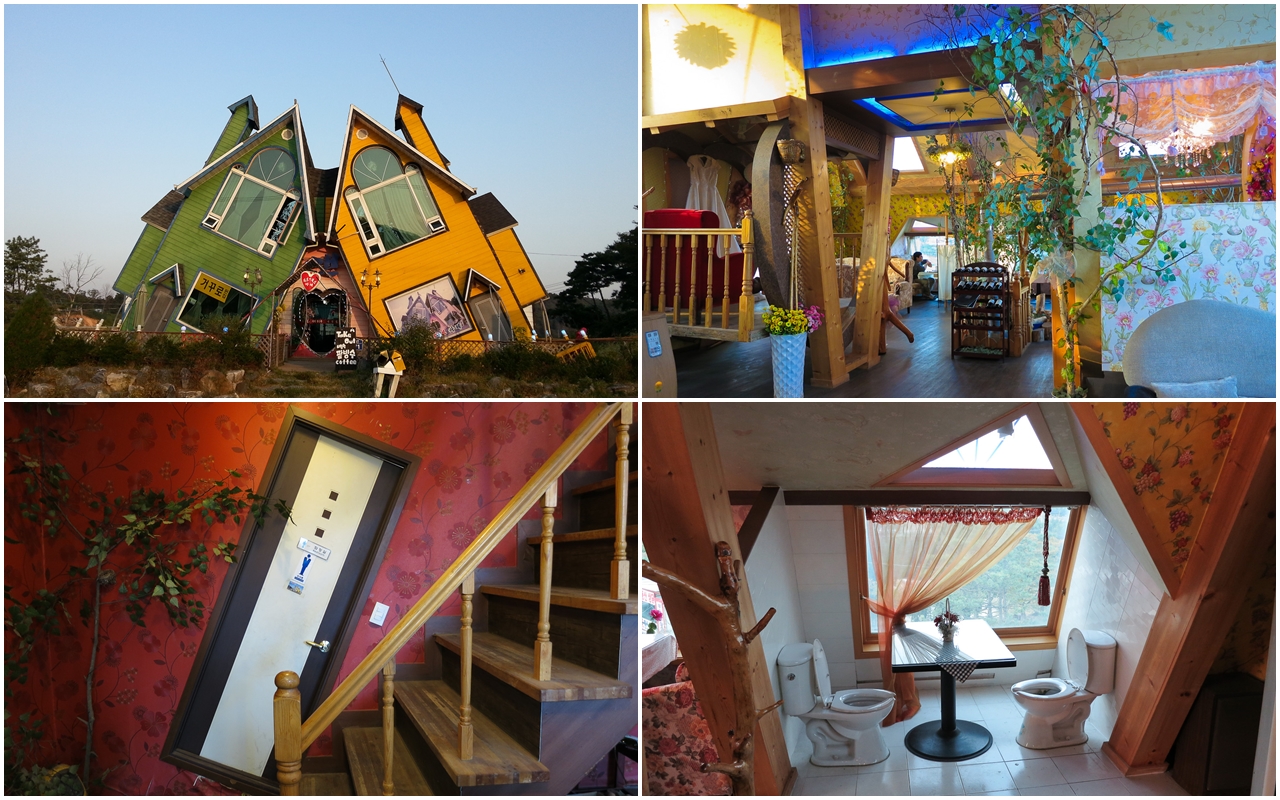 These two intimate buildings aren't actually a house. They serve as a cafe in Ganghwa-do, South Korea, that lean on each other at a 50-degree angle. According to some curious visitors that finally managed to satisfy their desire to see what’s inside, most things are upright, except some slanted mirrors and the restroom. With tilting toilet and washbasin, activities we used to do every day will turn into challenging drama. 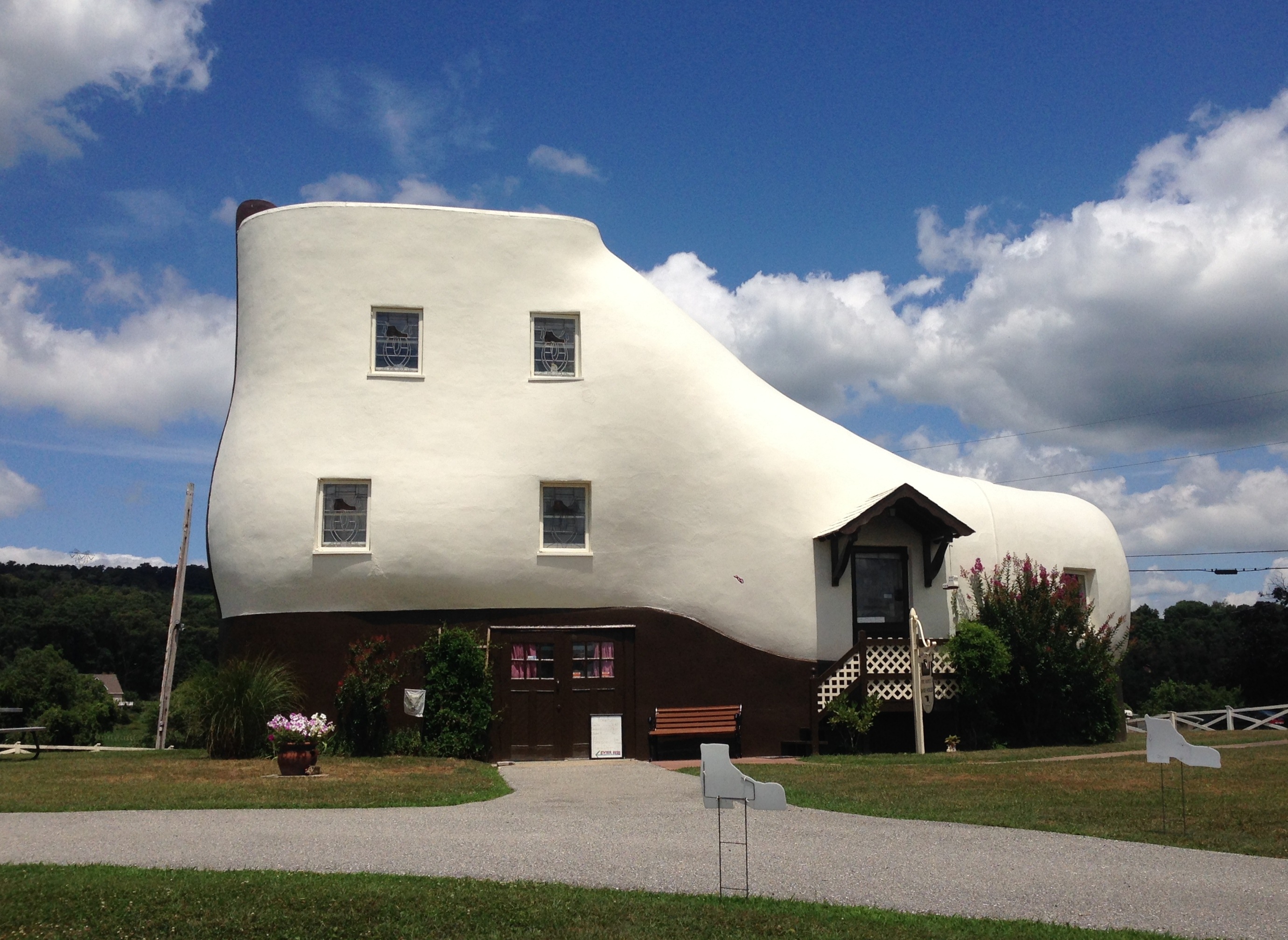 We don’t know if the designer of this house was inspired by an old nursery rhyme. That goes: “there was an old woman who lived in a shoe. She had so many children, she didn’t know what to do.” It might be easy for you to imagine an old woman lived inside of it with her fussy children spoiling the kitchen.

Okay, forget about that poor woman. This giant shoe was actually built in 1948 by a man who was known as “the Shoe Wizard.” Colonel Mahlon Nathaniel Haines had this 25-foot tall shoe house erected as an advertisement for his forty shoe stores that he had in the other states. You can take a look at this cool house while visiting Hellam, Pennsylvania.

If mermaids were to go on a land holiday, they would no doubt choose this quirky Shell House as a place to stay. The Shell House, also known as Casa Caracol, lies in the beautiful Isla Mujeres, a Mexican island in the Caribbean Sea.

Everything related to this house was created as a tribute to the ocean. Overlooking the pristine white sandy beach with 180-degree turquoise ocean views, this house is the perfect choice for a fantastical vacation or a sea-themed wedding.

The natural beauty of the three waterfalls might be the ultimate reason to visit the Niagara Falls. But perhaps the Upside-down House could be your additional incentive to spend a summer around there.

Located near the bottom of the falls in Ontario, Canada, the house was built topsy-turvy on purpose. The owner offers daily tours for curious tourists who want to know what the interior is like. This peculiar house is also across the street from Ripley’s Believe it or Not. Coincidence?

This cute yet funny house looks as if it popped out of the Smurf comic books. You may imagine dwarfs are inhabiting this bizarre dwelling, but (sorry to let you down) this house in Cincinnati, Ohio was actually designed and built by an old architect with the help of his 35 students.

Professor Terry Brown was a lecturer at the University of Cincinnati College of Design, Architecture, Art and Planning. He and his students used many different items to make this house look like a giant mushroom, and thus the name given by the residents of the neighborhood.

Despite the Mushroom House only having one bedroom, it took 14 years of those involved to complete the project. Sadly, Professor Brown died in 2008, but his home is still standing as a great spectacle for those who passed by.

When an RV apartment is not an option, what’s more, suitable to support a nomadic life than the N55 Walking House? If you have a small family who gets bored easily when settled on the ground, this “walking-house” will take you across the country without even leaving your cozy living room. This funny yet cool house was built in Copenhagen, Denmark, and can accommodate four people. 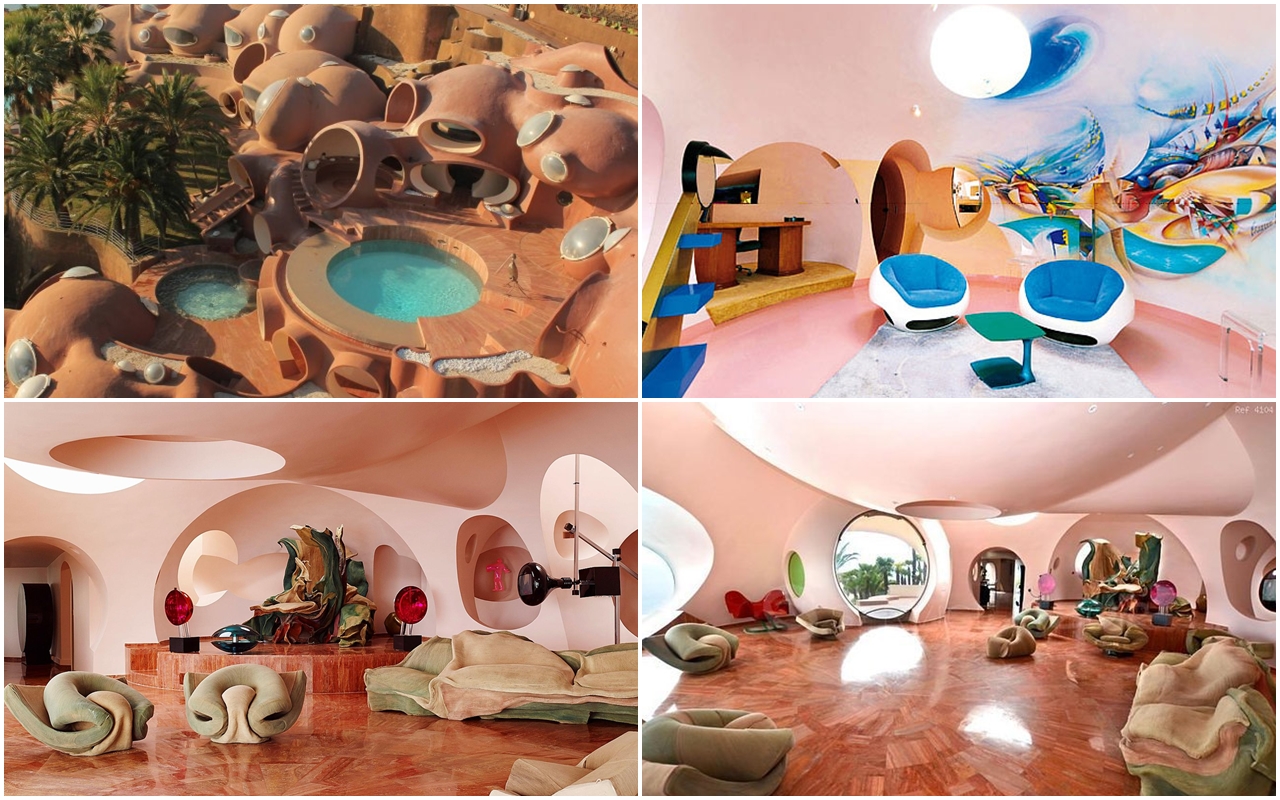 Overlooking the Mediterranean Sea, the Bubble House in Cannes, France, was built for French designer Pierre Cardin in the 1970s and extremely popular during the disco era. But it seems that this bizarre-looking house will never go out of style. The house, which is big enough for party-goers, has 28 rooms that are all shaped like giant bubbles.

Though this entire house looks so artsy, it’s impossible to place any painting in its interior’s walls. There are too many curves! 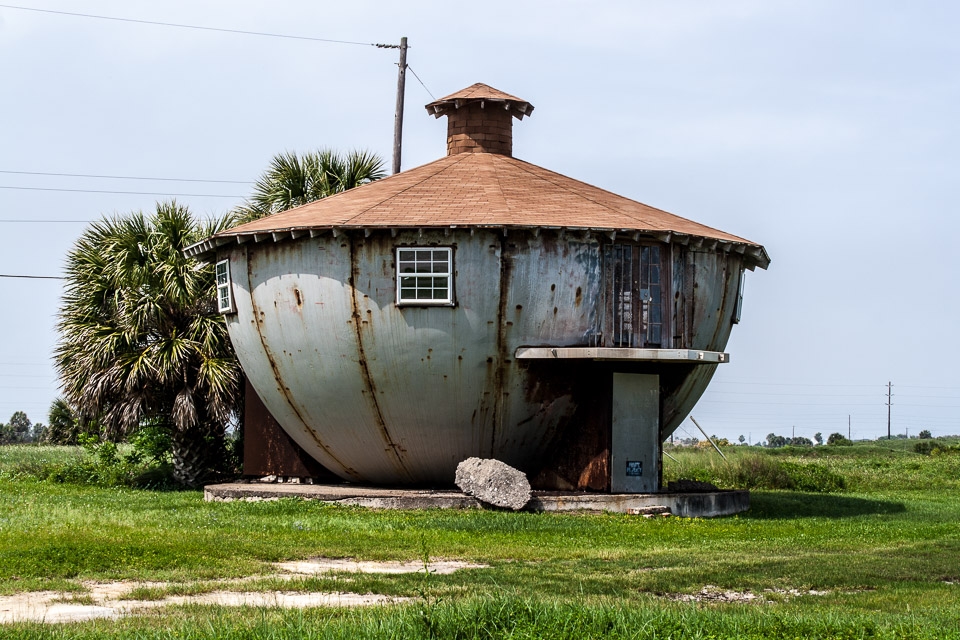 This Alice in Wonderland sort of thing can be spotted near Galveston, Texas. It looks just like a huge kettle that has been sitting too long. Only it’s missing its stove. The house is made with a steel dome and the roof that made of wood shingles.

It’s amazing that the house has been sitting in the same spot in the Gulf of Mexico for over 50 years without any decent explanation about where it came from or who the owner is. The mysterious Kettle House, which has withstood hurricanes, severe weather, and many heavy storms, is rumored to have been built by the owner, who left it to his son. However, nobody ever claimed for the house’s ownership. 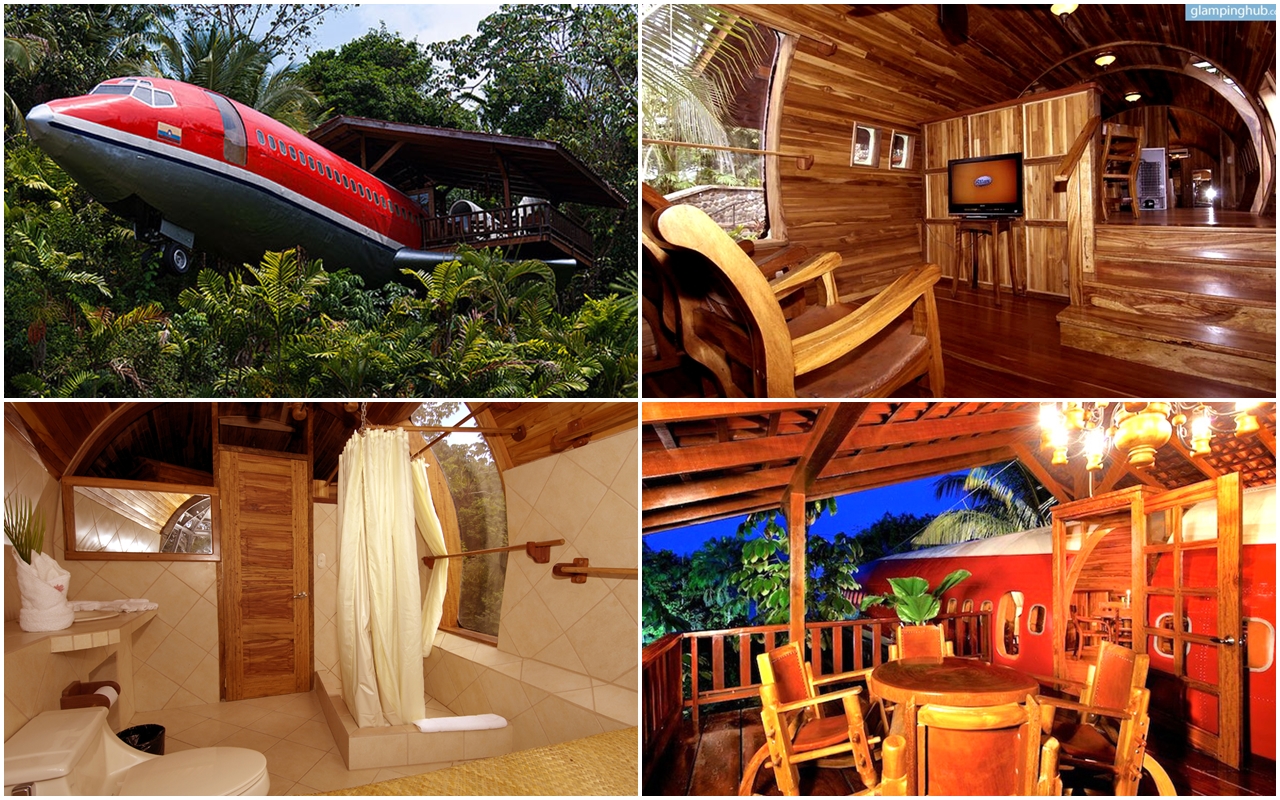 This real 1965 Boeing 727 add truly spectacular views into a house. Perched on a 15-meter-high platform, it offers fantastic ocean views as well as views over the forest canopy. It’s actually a bookable vacation house in Costa Rica with two bedrooms, a kitchen, a bathroom, dining room and an outside terrace. About the interior, well, it’s not exactly a duplicate of that we found in a Boeing 727. Instead, the house features wall-to-wall teak paneling and much of the furniture also features hand crafted wood from the local forest.

This is a perfect house for those who want to yell “yabba-dabba-doo!” while washing the dishes. This cave-like mansion formerly owned by TV personality Dick Clarke, who recently passed away. Everything inside and outside the house will bring you to the Stone Age, and show you what it was like to live a caveman life. It was recently sold for US$1.7 million. This Mexico City’s seashell house design is heavily influenced by Antonio Gaudi’s works, with the smooth round shapes nodding to the Spanish architect. Javier Senosiain from the Arquitectura Organica added the colorful mosaic window, which makes you feel like you are in a magical world. Everything about the house is just “different”, with a 360-degree couch in the living room, circular kitchen and indoor gardens.

Up Next: Sustainable Jewelry grows a Jungle while you wear it