The Aftermath of Bukit Duri Eviction

A girl walks on a muddy road that used to be her neighborhood in Bukit Duri, South Jakarta. (Brilio/Jefri Aries)

For residents of Bukit Duri, eviction is more than just a topic in the political debate.

The neighborhood located in Ciliwung riverbank, Bukit Duri, South Jakarta had existed for decades before the Jakarta government, under Governor Basuki Tjahaja Purnama demolished it last year to make way for a revitalization program to handle the city's flood problem.

The neighborhood is now gone, leaving some half-demolished houses and a mosque. Parts of the river are now framed by concrete fences while the development process is still ongoing.

The eviction was conducted by the Jakarta government in September 2016 despite protest from residents and activists. The eviction was then taken to the court by local residents with help from Jakarta Legal Aid Agency. Jakarta State Administrative Court (PTUN) granted their lawsuit in January, saying that there was a procedural error and that the Jakarta government has to compensate the residents.

Evictions conducted in various places in Jakarta, including Bukit Duri, have become a hot political topic during the election season. Incumbents insisted that their decision was intended for a greater good, while contenders blamed the current government for neglecting their citizens.

Just after the first round of election was finished, Bukit Duri became hot topic again. Heavy rain caused inundation in several spots throughout the city, including Bukit Duri —an area that the Governor once promised would never be flooded again.

While the heated debate among politicians and their supporters continue, residents of Bukit Duri try to resume their daily lives with whatever they have left.

We went to the evicted neighborhood on Friday and met Andre, 31, whose house is now gone. He, along with the rest of the neighborhood, had to move to Rawa Bebek, Cakung, East Jakarta where the government provided subsidized apartments for the evictees. But living in Cakung is not a good option for Andre whose job is in the city center. Andre often left his family in Rawa Bebek and chose to crash in a friend’s home in Bukit Duri.

“My friend’s house on the riverbank is still intact, though the bathroom was demolished during the eviction,” Andre said. “I often sleep there because the distance from Rawa Bebek to my work location in Cawang is quite far and the traffic is heavily congested.”

“It’s far from our workplaces and we have to pay rent. It’s Rp 500,000 per month including water and electricity,” Andre said. “And where’s that compensation from the government?”

Being forced to move and commute is not easy for Andre who grew up in Bukit Duri.

“I was born here. My grandmother moved here when she was young and single. My family also lived here all their lives,” he said. “It’s sad, having to leave it all behind just like that.”

Eno, a woman who owns a small food stall in the neighborhood, is also affected by the eviction.

Though Eno only rents a place in the neighborhood, the eviction made her life more difficult.

“Since the eviction, fewer people com here,” she said. “I used to earn Rp 15 million every two months, but now it’s even hard to earn Rp 5 million per two months.” 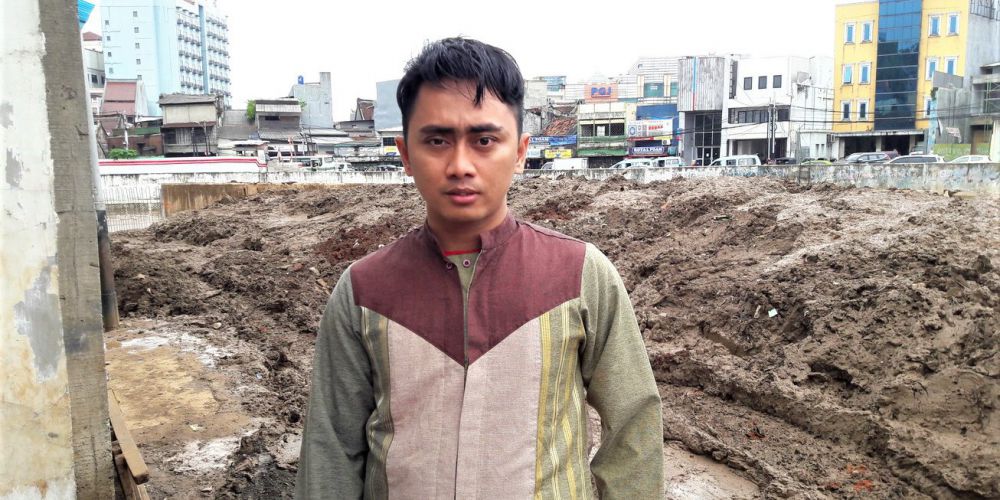 Andre, one of Bukit Duri evictees, stand behind what used to be his neighborhood. (Brilio/Retno Wulandari)

With the eviction and relocation program, the government promised Jakarta’s flood problem will be solved. But Andre has little confidence in the government.

“The flood still came. Yesterday, water came and inundated the first floor of my friend’s house. Thank God there’s a second floor for us to sleep,” he said. “We don’t like this condition so much we took effort to vote on Thursday to make sure Jakarta has a new leader with new policies. Even those who already moved to Rawa Bebek, they were still registered here so they came all the way just to cast their ballots.”

But the bitterness varies among people we met in Bukit Duri.

Rahmat, a minicab driver who usually rests in Bukit Duri, was indifferent to politics and dispute.

“Whoever becomes the government won’t change my fate. I’ll still be a driver, she (Eno) will still sell food,” he said.

But despite his indifference, Rahmat admitted something Rahmat would not.

“Well, the recent flood was better than before. I mean, before the eviction, when flood came, houses could be drowned up to the roof and it took a long time for the water level to decrease. Now it’s much faster. So, I guess there’s a difference?”

Up Next: Faces of Jakarta: Affi Assegaf, The Biggest Women Community Initiator