Anggun C. Sasmi Speaks Out On Blasphemy And Terrorism

"Why do we nurture hypocrisy?"

Brilio.net - Another celebrity has recently spoken up in response to accusations of blasphemy against Jakarta Governor Tjahaja Purnama, who was recently named a suspect after a video of him mentioning the Al-Maidah 51 Quran verse drew protests from hardline Islamic groups.

"Many are raising their voices on the issue of an 'alleged blasphemy', but there aren't that many speaking up against 'acts of terror in the name of religion'. Why do we nurture hypocrisy?," singer Anggun Cipta Sasmi said on her Twitter account.

Anggun was referring to the recent bombing in a Samarainda church that injured many and killed a toddler named Intan Marbun who suffered 70 percent burns from the explosion. The bomber, Jo bin Muhammad Aceng Kurnia has previously been arrested for a separate bombing case in Tangerang in 2011. 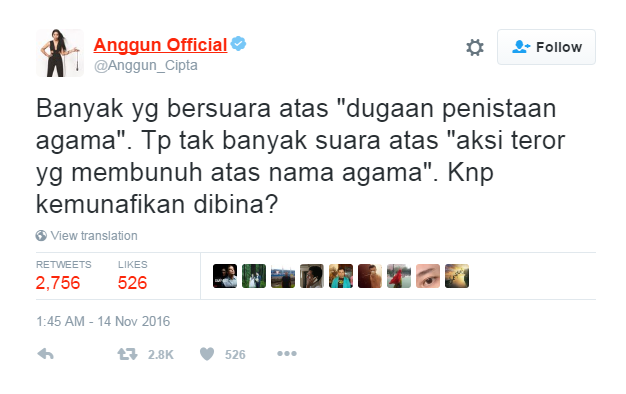 The tweet soon quickly gained more than 500 likes and 2,756 re-tweets, and other Twitter users also took to sharing their opinions.

“Indonesians must be saved from radical groups. If not, the country will be destroyed slowly. @Anggun_Cipta,” says user @FerryMaitimu. Up Next: Woman Angkot Driver Breastfeeds On The Job, Inspires Working Mothers