'Orangutans are rare, and an albino orangutan is even rarer.'

A rare albino orangutan has been rescued in Kalimantan where villagers were keeping the white-haired, blue-eyed creature in a cage, a protection group said Tuesday.

In an extremely unusual discovery, authorities picked up the female, estimated to be five years old, in a remote village in Kapuas Hulu district.

The Borneo Orangutan Survival Foundation (BOSF), which is caring for the critically endangered ape -- believed to be albino -- said the organisation had never before in its 25-year history taken in such an orangutan. 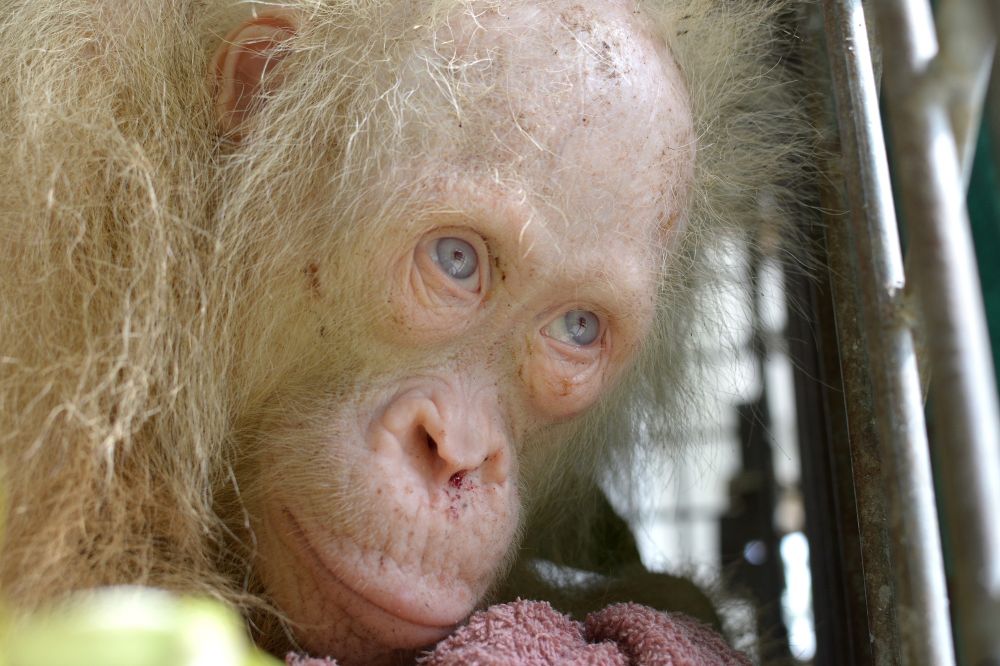 Villagers said they captured the ape -- who has not yet been named -- on Thursday. Authorities rescued the ape two days later.

"Orangutans are rare, and an albino orangutan is even rarer," Nico Hermanu, a BOSF spokesman, told AFP.

"Since BOSF was founded 25 years ago, we had never before taken in an albino orangutan at our rehabilitation centre."

Pictures showed dried blood around the creature's nose, with the foundation saying the injury could have been sustained when the ape was fighting the villagers' attempts to capture it.

The orangutan has been taken to BOSF's rehabilitation centre for further assessment. Almost 500 orangutans are kept at the centre.

The Bornean orangutan, which along with the Sumatran orangutan are Asia's only great apes, is classified by the International Union for Conservation of Nature as "critically endangered" -- just one step away from extinction.

The creatures have seen their habitat shrink dramatically as the island's rainforests are increasingly turned into oil palm, rubber or paper plantations, and are sometimes targeted by villagers who view them as pests.

Up Next: Jakarta Will Probably Have 'Jomblo Card' For Single Citizens