Manny Pacquiao returns to the boxing ring for one last fight. He will face off against Jessie Vargas in Las Vegas.

Brilio.net - Just when we thought the public wouldn’t ever see another fight from Manny “Pac-Man” Pacquiao, the Filipino boxing legend confirmed he will come out of retirement to fight WBO welterweight champion Jessie Vargas on November 5 at the Thomas & Mack Center in Las Vegas.

Pacquiao (with 38 KOs) suggested he would retire this past April, following a victory against Timothy Bradley (which he also said was his last fight), and right before getting himself elected into the Philippines senate one month later. Regardless, Pac-Man now finds himself committed to yet another boxing match.

But with a political career in the oven, and an illustrious boxing stint already in the bag, many of us are wondering why this “last fight” is necessary for Pacquiao. Unfortunately, his answer wasn’t the fairytale you might imagine. “Boxing is my passion, I miss what I’d been doing inside the gym and atop the ring. Boxing is my main source of income,” explained Pacquiao to Ring TV.

Ah yes, indeed it’s all about the passion, and of course, the money. “I can’t rely on my salary as a public official,” explained Pacquiao. “I’m helping the family of my wife and my own family as well. Many people also come to me to ask for help and I just couldn’t ignore them.”

The boxer and now-senator says he will conduct his entire training camp in the Philippines so as to simultaneously attend to his legislative work. Pacquiao told ESPN, "My training -- no problem. We will start early in the morning for my runs and gym training. There are no sessions or hearings in the senate at 6 or 7 am. They usually start earliest at 10 am, so I will be able to manage my schedule.”

“I assure my people my fight and training will not affect my work as a senator. This is my campaign promise and I’m determined to keep it,” said  Pacquiao. 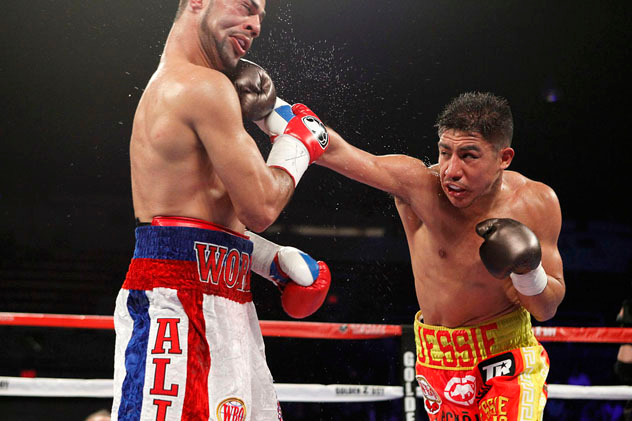 Jessie Vargas (with 10 KOs), who won the vacant WBO title in March when he beat Sadam Ali, became the choice after Pacquiao and his adviser Mike Koncz decided they weren’t comfortable with the styles of other potential opponents. This included the unbeaten two-belt junior-welterweight world champion Terence Crawford. “I don’t like Crawford’s style. I don’t believe it’s a style that suits Manny,” Koncz told the Los Angeles Times.

The fight with Vargas is sure to help Pacquiao consider whether he can manage two jobs or leave the boxing ring for good. “I’m going to beat the shit out of Manny Pacquiao and then I’ll be the next star, everyone will be talking about me. It’s plain and simple. I’m going to surprise the world, I’m going to let them know who Jessie Vargas is,” said Vargas to George Gigney of Boxing News Online.

“This is my chance, this is my time. I can’t wait to show why it is [that] I hold the WBO world title. It’s the biggest fight out there and a fight that could catapult me to the top, that’s what I’ve always wanted,” he added.

Now, the question remains: Will this really be the last fight ever for Pac-Man? Stakeholders doubt it. In an interview with CBS Sports, head of Top Rank Boxing and Pacquiao’s promoter Bob Arum said he’s left the door open for a rematch with Floyd Mayweather in 2017, should he choose to come back out of retirement for his 50th match.

What do you think about Manny Pacquiao’s comeback? Should he just focus on his work in politics? All things considered, would a rematch against Mayweather indeed be the fight of the decade?

Up Next: 6 Characteristics That Make Indonesians So Unique