Jaja claims to have painted the famous female spirit

Brilio.net - We've all seen hundreds of painting with humans as the models. But ghosts? It seems absurd, but not for Dirja.

Dirja, who goes by Jaja, is a painter of the dead for years.

He gathers photos, memorabilia and testimony from friends and family to build a picture of the deceased.

Amongst his sketches, there are a number of Muslim leaders and figures who passed away hundreds of years ago. There is also a painting of a murder victim.

The 50-year-old doesn’t need much time to finish a painting. “It took only five minutes to make a sketch, but if I want to make it as smooth as a painting, I need roughly 20 minutes,” Jaja told Viva.

Jaja says his paintings can reveal the face of someone’s ancestors and they uncloak a mystery lingering over someone’s death. He added a note to one painting saying the woman in it was strangled to death.

The Tangerang-based painter says he started to make sketches after experiencing a paranormal event. He said in 2003 when he was working on a cruise, a beautiful lady came up to him. She told him her name was Mariam, and that people knew her as Si Manis Jembatan Ancol (The Pretty Lady of the Ancol Bridge). She is a woman and a prominent urban legend in Jakarta even now. Ancol is in the northern, old part of the city.

The ghost was the subject of several popular TV shows during the 1990s. 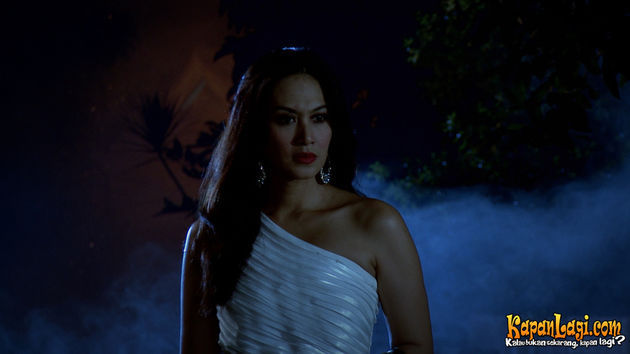 “That time, our ship was docked in the Ancol harbor. When I was sitting, taking a rest, a women appeared all of a sudden. She wore a green saree,” Jaja recalled.

Suddenly he felt an urge to paint the lady even though he had no sketching experience. Mariam agreed and Jaja, using a notepad and pen, started to draw. As he begun, he says he felt an unseen hand guiding his hand to finish the sketch without difficulty.

Mariam told Jaja that the sketch shouldn’t be used for profit and disappeared.

Beside Jaja, there are several other artists who claim to have painted Si Manis Jembatan Ancol, including H. Mohammad Husni who lives in Kebon Jeruk, Jakarta.

Up Next: Has 90s actor Rony Dozer really become an Uber driver now?