We go into the tunnels. 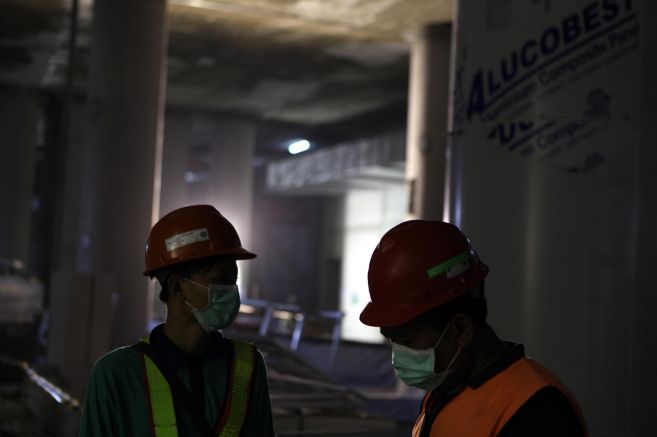 In 2015, Jakarta officially had the worst traffic in the world. That same year the country's president said it would not get better for a decade.

There was a reason for that announcement: construction on its Mass Rapid Transit - or MRT - system causing fresh congestion.

Jakarta's problem is simple. There are too many cars, not enough road, no real public transport options (except on the same roads) and no sign that any of this pressure will slow down. Soon, that is. After years of ideas, planning, political intervention and changes of governments, this year Jakarta is going to finally have its own subway system. The company PT MRT was founded in June 2008 to build the project, but physical development started more than 5 years later. In October 2013, PT MRT broke ground underneath Sudirman-Thamrin, a thoroughfare that has stood witness to Indonesia’s development as economic growth advanced and more commuters flocked to the skyscrapers that sprang up along it.

Fast forward to 2017, the construction of its first corridor running from Lebak Bulus in South Jakarta to the Hotel Indonesia Traffic Circle is more than 60 percent complete. Most of the construction is invisible from above, so I took our photographer Jefri Aries with me and went below.

As predicted, the site was dimly-lit and full of dust, but the station is clearly there.

We descended 20 meters and arrived at the concourse level, a level that will be filled with shops and stalls when it opens. According to our guide, there will be similar scene at every MRT station, but Hotel Indonesia has the longest platforms, and so the biggest commercial zone.

Workers at Hotel Indonesia MRT Station site are trying to get the station ready for March 2019 opening.
© 2017 brilio.net/Jefri Aries

After passing the concourse level, we arrived at the platforms. They are built in a closed design with glass partitions separating them and the tracks, just like their counterparts in Singapore. This is a far cry from Jakarta's Commuterline stations, designed like a Victorian Tube station without the roof.

In the MRT, there are elevators for those who can't take the stairs and escalators between all levels. Several TransJakarta bus stations have elevators as well, but normally they are out of order, vandalized and long-neglected. Even the walkways at TransJakarta are steep and poorly planned, but not on the MRT.

Then we moved to the MRT's stunning tunnels, currently fitted with temporary rails to bring soil and machines from one part of the site to another.

The station and the whole Phase 1 construction project are scheduled to finish mid-2018. Then, railway construction, rail stock installation, trial runs and certification will take place before the route is finally opened for public use in March 2019. After that, PT MRT will start the development of the second stage, from HI to East Ancol in North Jakarta.

After more than one hour down there, my nose and lung could not take it anymore. I started to cough because the dust was too much. I could only inhale so much dust and cement.

This made me wonder about the workers' health down there, having to deal with the situation every day.

I saw a sign saying that respirators must be worn at all times, but I saw no workers wearing one. Just a few wore regular cotton masks.

“They don't use respirators. There are fans, though,” my guide said when I asked him about the workers. “Now there are holes so wind can come in.”

“The workers were trained before starting to work here. They know how to work safely in a closed site like this.”

The MRT construction sites are open every Thursday to accredited visitors. You can contact PT MRT at its website here.