One toddler died after suffering burns from the attack and a few others remain under critical condition.

Brilio.net - An investigation by the police into the bombing that took place last Sunday at Samarinda's Gereja Oikumene in East Kalimantan shows the bomber, identified as a man named Juhanda, had spent three days putting together his weapon.

"He created the bomb himself for three days," National Police spokesman Boy Rafli Amar said. "Then on Sunday, he came to the crime scene and threw the bomb to the church yard.”

Boy mentioned that Juhanda had learned to create a bomb in Aceh between 2009 to 2011. As many as 15 witnesses have given their statements for the case’s investigation to date. 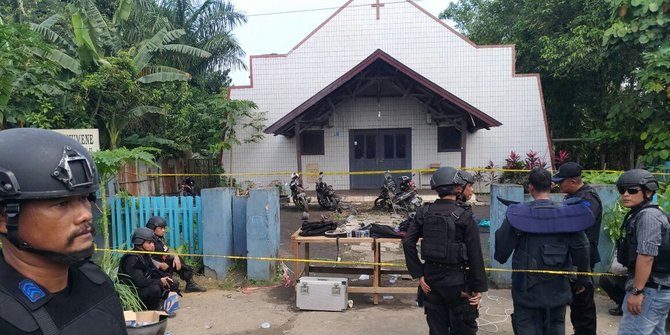 Vice President Jusuf Kalla stated the bomb in the church yard serves as a warning for the government that radicalism continues to exist in Indonesia. He urged the Indonesian National Armed Forces and the Police to prioritize their fight against radicalism.

“We are concerned and mourning for the victims. Again, it gives us a warning that radicalism [and] terrorism are around us," he said at the office of the Vice President.

“The steps the government can take are, of course, aside from education and dissemination, also to approach the security and law,” he continued.

One of the victims of the bombin was two-year-old Intan Olivia Marbun, who died in the early hours of Monday after suffering from serious burns.

Another victim, Triniti Hutahaya, three, suffered a a 50-percent burn and remains under the medical team's intensive treatment. Other toddlers, Alvaros Aurelius Tristan Sinaga and Anita Kristabel Sihotan are also under treatment.

“Triniti is suffering from burn reaching 50 percent and swelling of the lungs after inhaling the smoke explosion. The critical period might last for 10 to 12 days and we keep striving for the victim to be able to pass the critical period,” Rahim said.

Local residents caught the bomber Juhanda as he tried to escape by swimming across Mahakam river. Police records show he has been arrested in May 2011 and sent to prison for three years and six months following another bombing incident in Serpong, Tangerang, Banten. He was paroled after receiving an Idul Fitri remission on July 28, 2014.

Up Next: Anggun C. Sasmi Speaks Out On Blasphemy And Terrorism