Medical Explanation On Anthrax In Yogyakarta

Here to stop you from being paranoid.

Brilio.net - The news about anthrax virus in Kulon Progo, Yogyakarta makes some people worried especially after messages warning people to avoid certain places in the city to avoid the virus spread on social media.

The medical faculty of Gadjah Mada University Yogyakarta then spread a clarification that anthrax can only be transmitted from animal to human. “It’s not transmitted from human to human.” Said the faculty staff dr. Riris Andono Ahmad, PhD.

Riris also clarified that it is safe to go to hospitals which have helped those suffered from anthrax. “People are also safe to visit Godean area since there is no report saying the animals suffer from anthrax.” 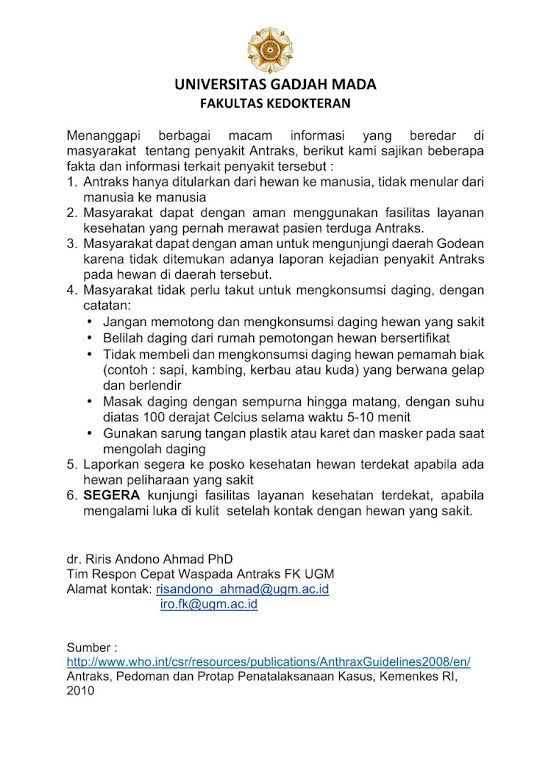 She then mentioned that no one should be worried about consuming meat as long as it does not come from sick animal and she suggest them to buy meat from a certificated butchers. It is also important to make sure that the meat consumed has been perfectly cooked.

The news became viral after 16 residents of certain areas in Yogyakarta infected after consuming meat from a cow which suddenly dead. They thought they were bitten by tomcat bug before being diagnosed infected by anthrax.

All of them got similar symptoms where their skin became blistered, red, dry, and then blackened. They are currently allowed to go back home.

Anthrax is an acute infectious disease caused by bacterium Bacillus anthracis which only can be transmitted from animal to human, not human to human.

Up Next: Anthrax Attacks Yogyakarta, Puskesmas Need To Be Cautious