Yuna Zarai hit it big in the LA music scene, having recorded a song with Usher. Soon, she’ll fly to Rio to perform at the 2016 Olympics.

Brilio.net - Malaysia’s up-and-coming R&B singer Yuna Zarai has bustling days ahead. The celebrated songstress is slated to lend her vocals to the 2016 Olympic Games, a song set to feature a glittering roster of musicians including Grammy Award-winners Lenny Kravitz and Corinne Bailey Rae.

Yuna’s participation in the Olympic Games is yet another feather in her hat this year. The singer, who launched her music career via MySpace way back in 2006, just released a third studio album, Chapters, which features a variety of interesting collaborations.

The Muslim artist recorded a duet titled “Crush” with US chart-topping musician Usher. In an interview, Yuna describes the ballad as a “simple love song” that talks about the “catching of feelings” in the “most innocent manner.” The theme of “genuinely falling in love with someone because of the person he or she is” was what caught Usher’s interest, according to Yuna. She says:

“Usher was into that, and the fact that he wanted to be on the track is so cool [...] We talked about the song after I sent it over to him. He was really excited about it and wanted to get to know me and the song.”

Contrary to popular belief, Yuna and Usher did not record the song together. According to her, not being able to directly work with Usher in the studio made eventually meeting in real life him a special occasion. When they did finally meet, the duo shot a music video for Crush, which hit more than 3 million views on YouTube within three weeks.

Apart from Usher, Yuna spends time with Jhene Aiko, DJ Premier, and Pharrell Williams to continue refining her brand of soulful pop music. It also helps that she now lives in Los Angeles, the hub of the global music industry.

Yuna thinks of LA as her second home, one which offers a different creative vibe than Kuala Lumpur. “LA is a melting pot of musicians coming from different parts of the world, so it’s nice because you get to be creative,” she says. For Yuna, an artist who writes her own songs, the creative process can come with its own sets of ups and downs. She elaborates, “There’s definitely some lows which have a lot to do with finding the right sound or the kind of music I want to make.”

According to her, the only way to overcome dips in music making is by communicating with people within the music industry, including producers, in an effort to get to know the space better. Yuna adds that when honing her craft, practice will hopefully make perfect. “The secret is to just be patient. Nothing good comes to those who cut corners,” she says. On being in the tough-as-nails LA music scene, Yuna thinks keeping a positive attitude is important. She makes sure to not let her mind be ensnared by thoughts about what other people might say about a Muslim girl from Southeast Asia getting into the US music industry.

“I think once you stop talking about how hard it is for a Southeast Asian woman to break into LA’s competitive music industry, it just stops being that way,” Yuna suggests.

Yuna stands out from most LA musicians, not only because she comes from the other side of the world, but also because she wears a hijab, which she sports with flair and urban-edginess.

“I think I’m a mixture of the traditional and modern,” says the artist, adding that she wants to overturn the stereotype that being conservative and traditional equates to “a woman being oppressed.” That line of thinking, she feels, couldn’t be further from the truth.

“I love my roots and values, as well as the wisdom that has been passed down to me by my ancestors for generations,” she says. “But at the same time, I would like to grow with the world. I love technology and I embrace modernism.” Yuna’s love for fashion has also translated into her own clothing line, November Culture, which mirrors her signature laid-back attire, punctuated with turban-style head scarves, statement jewellery, and leather jackets.

When asked about how she picks her clothes, Yuna says she simply tries on pieces that catch her eye. “I’ll try them out and if they look weird on me, I’ll stop wearing them. It’s the same with make-up too,” she says, adding that when spending time with friends, her favorite fashion pieces are her harem pants, long sleeve tops, chambray shirts, and black scarf.

On expanding her creativity to other artistic fields, Yuna says she has not yet considered it.

“I’m already in music and fashion, and that’s a lot for me to handle,” she says, adding that whatever she does choose to do, it has to represent her as a person. As busy as she may be in the US, Yuna has not stopped thinking of Malaysia, which she will always consider home.

“I miss being with the family in Malaysia,” she says, adding that she keeps up with family and friends via social messaging apps.“What I really miss is just being able to chill at home doing nothing, hang out with [...] friends, and drive around,” she says.

She adds that even when she is back in Malaysia, her visits are always packed with meetings and appearances. “It’s kind of sad I don't get to really sit down and talk to the few people I really care about when I’m back in Malaysia. I haven't done that in years,” she laments. 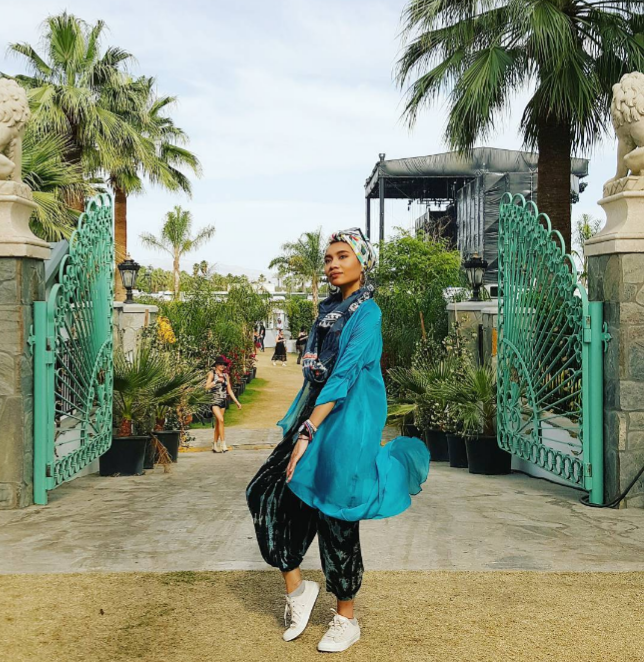 With a tour up ahead, Yuna might be seeing a little less of Malaysia in September when she performs for fans in UK, Belgium, the Netherlands, and other places. “I just can’t wait to meet new fans and those who have seen me ever since I first started out,” she says, adding that she is also excited to play new material, owing to the “great feedback” fans have always given.

Looking at her younger fans reminds Yuna of being a teenager. “I wish sometimes that I could go back to the time when I could just play netball out in the sun with my friends,” she reminisces. “I’m turning 30 years old soon, and a huge part of me is still that child that I had taken the time to get to know in the past.”

This retrospective look on life has led her to a piece of advice for teens and 20-somethings. Instead of trying to look older, which she apparently sees young girls doing everywhere, they should instead try to enjoy their youth. “Take your time, don’t grow up so fast,” says the artist.

Up Next: Why China snubbed UN tribunal ruling on West Philippine sea